Accessibility links
Gum: A Stick A Day May Keep The Dentist Away Good news for frequent chewers: Sugarless gum with xylitol may be good for your teeth. Experts say xylitol works against cavity-causing bacteria, helping to prevent tooth decay. 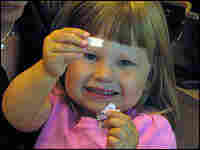 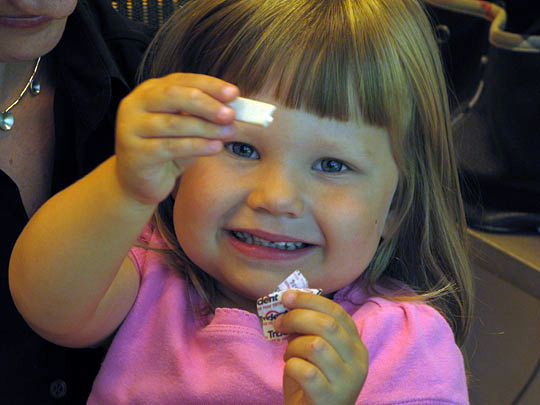 Peppi Paarma, 3, chews her morning gum every day to protect her teeth.

You've seen the claims on sugarless gum wrappers. Packages of Orbit say the chewing gum helps strengthen the teeth. And a package of Trident gum containing xylitol says it helps prevent cavities. So are these claims solid?

"You know, it depends on how much of the active agent is in that product," says Francisco Ramos-Gomez, a pediatric dentist at U.C.L.A. "And how much you chew per day."

Oral health experts say the popularity of sugar-free gums has been one step in the improvement of children's oral health. Since consuming lots of sucrose — or table sugar — can lead to cavities, there's a benefit simply in taking it out of gum.

Gum makers have gone one step further by adding ingredients such as the natural sweetener xylitol. That means there's potentially even more of a benefit.

"Xylitol is an anti-microbial — so it's acting against the bacteria themselves," says Peter Milgrom, a dentist at the University of Washington. "So it helps prevent tooth decay."

It's important to note that studies suggest that sugarless gums made of another sugar substitute, called sorbitol, do not seem to have the same preventive effect.

Milgrom and his colleagues have studied how much xylitol is needed to actually knock out bacteria and prevent cavities. And he has two pieces of advice. First: Read the ingredient list on the gum package. If xylitol is the first ingredient, then there's probably enough of it to be effective. And second: Chew a lot of it.

"You have to chew at least two pieces, three times a day to have an effect," says Milgrom.

This may sound like an inordinate amount of chewing, but in Finland kids have really gotten used to it. The Finns have been chewing xylitol gum for years as part of a public health initiative to reduce cavities. And Finnish researchers have documented a preventive effect in numerous studies going back to the early 1970s at the University of Turku. Throughout Scandinavia, xylitol products are widely available, from lozenges and toothpastes to chocolate and candy gummy bears, says Ramos-Gomez.

Too Young To Chew Gum?

For kids who are too young to chew gum or for families that don't have access to good preventive care, there may be another option: daily doses of a xylitol syrup. Milgrom has just published the results of a recent experiment with children in the Marshall Islands who were given a strawberry-flavored syrup for about 10 months.

"The mothers just broke off the end of the squishy plastic tube and squirted it in their child's teeth," explains Milgrom. His team documented a 50 to 70 percent reduction in the development of cavities. The children who were given the highest doses of the syrup saw the greatest benefit.

Pediatric dentists say it's important to remember that xylitol is not a magic bullet in fighting tooth decay. Parents need to stay on top of all the other known prevention methods.

"Control of the diet, regular use of fluoride toothpaste and good ongoing supervision by a dentist are all important," says Burton Edelstein of the College of Dental Medicine at Columbia University. And, of course, so are daily nudges to remind your kids to brush.

There's also indirect evidence to support the claim that gums that have sorbitol, like Orbit, can help fight cavities by strengthening teeth, says Edelstein. It's a claim accepted by the American Dental Association.

"Sorbitol can increase saliva flow, which secondarily strengthens teeth," explains Edelstein. And at the same time, sorbitol is not sugar, so it doesn't cause the bacteria to produce that acid than can lead to cavities. But Edelstein says he's not aware of any studies that directly show that sorbitol-based chewing gums can directly strengthen the teeth.