Accessibility links
Michael Jackson's Memorial Service In L.A. Hundreds of thousands of mourners are expected to attend a public memorial for Michael Jackson in Los Angeles, and countless more around the world will watch the event on TV. But some fraction of the population wonders why the death of any celebrity warrants such attention.

Hundreds of thousands of mourners are expected to attend a public memorial for Michael Jackson in Los Angeles, and countless more around the world will watch the event on TV.

But some fraction of the population wonders why the death of any celebrity warrants such attention.

Nelson George, author and director. He wrote The Michael Jackson Story. In his remembrance of Michael Jackson, he compares the King of Pop to Citizen Kane.

Bill Wyman, editor of Hitsville.org, and the former arts editor of NPR and Salon.com

On The Scene With Ticketholders

Monday evening and Tuesday morning, correspondent Corey Takahashi spoke with Jackson fans who have tickets to the service. Hear them talk about the scene at the Staples Center and their expectations for the memorial. 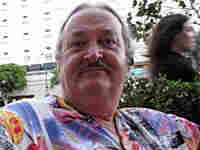 Leonard Sisk thinks the Jackson memorial is "as epic" as Woodstock. Click here to hear him. 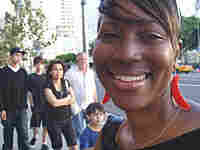 He had a dark side like many other people do, but Jackson was a legend and her "first crush," says fan Juanda Smith of Atlanta. Click here to hear her. 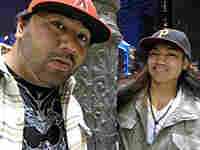 The brother and sister regret that the only time they'll "see" the King of Pop is at the service. Click here to hear them.

Read the Two-Way's live coverage of the service. 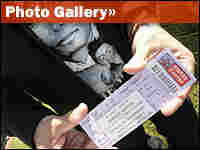 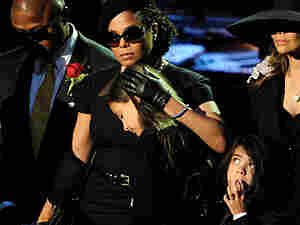 Millions of music fans said goodbye to Michael Jackson Tuesday during an emotional public memorial service that featured performances by fellow entertainers and eulogies by family and friends in Los Angeles.

Jackson's golden casket — crowned by a magnificent spray of red flowers — took center stage at the Staples Center, where the performer had rehearsed for what was to be a 50-concert comeback tour just one day before his death.

Jackson's brothers were pallbearers at the service. They each wore a gold necktie, one glittering white glove and sunglasses. The family sat together in the front row of the arena, including what was believed to be his three children.

Brother Jermaine Jackson was tearful later as he took to the stage to sing "Smile." At the close of the more than two-hour ceremony, the family came on stage, where one of the singer's three children spoke to the crowd.

"Ever since I was born, Daddy has been the best father you could ever imagine," Paris-Michael Katherine Jackson said. "And I just want to say I love him so much."

"Michael was a giant and a legend in the music industry, and we mourn with the millions of fans worldwide," Mandela said in a letter to the Jackson family.

Pastor Lucious W. Smith of the Friendship Baptist Church in Pasadena gave the invocation, followed by Mariah Carey and Trey Lorenz opening the service with "I'll Be There," one of many ballads made famous by Jackson and his brothers when they performed as The Jackson 5.

"We come together and we remember the time," Smith said. "As long as we remember him, he will always be there to comfort us."

"This is a moment that I wished I didn't live to see," Wonder said before his performance.

An estimated 20,000 people were at the Staples Center for the memorial. Free tickets were distributed to 17,500 people chosen from about 1.6 million who registered for a chance to attend the ceremony. About 11,000 people viewed the memorial from inside the sports arena, and 6,500 more watched on giant video screens across the street at the Nokia Theatre.

"Words really can't explain how I feel," said Dani Harris, a 35-year-old stay-at-home mother from Los Angeles. "I'm happy to be here, but the occasion is not so cool. I'm happy to be here and have some closure. It still doesn't seem real."

Fans began making their way to the Staples Center as early as 3 a.m.

"The family has been hurt, so I just want to come out and give some of my condolences and show some pride to Michael and his family," said Dot Cason, who flew in from Philadelphia.

Cason didn't have a ticket to the service, so she opted to join thousands of others in an area about three blocks from the action.

Los Angeles Police Department officials deployed as many as 3,200 officers for the downtown event and for a private service for the family at Forest Lawn Memorial-Parks and Mortuaries in Hollywood Hills.

The LAPD also obtained a temporary flight ban for the air space around the arena because of concern that a large number of helicopters might be using the space at different altitudes.

Television coverage showed crowds building in the pre-dawn hours Tuesday, as fans from all over the world lined up behind barricades waving signs. One man held up a British flag, and the entertainment news Web site TMZ.com showed a contingent of police walking a street near the Staples Center.

Hours before the event, vendors hawked T-shirts and other memorabilia, and fans milled about waiting for the memorial event to start.

"This is certainly a momentous occasion that is probably as big, if not bigger, than when Elvis [Presley] passed away," Steve Howard of Glendale, Calif., told Reuters news service.

"The impact he had on American music and world music crossed all boundaries," said Howard, who won a ticket in an online lottery.

About 50 theaters across the country broadcast the memorial live. In New York City, fans gathered outside the Adam Clayton Powell State Office Building to view the tribute on a giant video screen — and fans around the world watched the tribute live on the Web.

Jackson, who was 50, was to be buried at a private service for the family sometime Tuesday.

The pop star died June 25, two hours after he was found in cardiac arrest at his Los Angeles mansion. Los Angeles police and the Drug Enforcement Administration are investigating Jackson's death amid rumors that he may have overdosed on prescription medication. At least two autopsies — one ordered by the family — have been performed. Results of toxicology tests have not been announced, and may not be ready for several more weeks.

Beckloff had initially named Katherine Jackson administrator of the singer's estate, but that was changed when a will surfaced that signed by the singer in 2002. As stipulated in the will, entertainment attorney John Branca and music executive John McClain were named executors of the estate. Another hearing is set for Aug. 3.

With additional reporting by NPR's Carrie Kahn in Los Angeles and wire services.