MORE FROM THE SESSION

This is the year of the saxophone trio. Mark Turner and Fly released an album. Joshua Redman raised the ante with a double-trio phalanx of two drums and two basses. The sleeper comes from JD Allen, who has recently released Shine, his second consecutive trio recording, featuring bassist Gregg August and drummer Rudy Royston. The saxophone trio is an infinitely elastic combo. The horn can play lead melody, or it move closer to the rhythmic center. 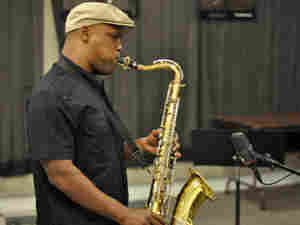 "It seems to be a very intimate setting for me," Allen says. "I get to the point when I hear the bass and drums behind me, more so than with a piano player."

The songs on Shine amount to condensed miniatures — each a short story told with little fanfare.

"It just felt right. We got to the point and said it," Allen says. "Anything more than that would have been a little too much. It wasn't like we were trying to make a three- or four-minute tune. But once we finished, they were three and four minutes."

JD Allen grew up in Detroit, stepson of a Chrysler worker. Saxophonist James Carter assumed the role of big brother and teacher.

"He used to give me free lessons. He would pick me up, and I'd spend the weekend at his house," Allen says. "He took me to my first Japanese restaurant. We would catch a movie, have some good food, and then we'd practice and listen to Rudy Ray Moore tapes, check out old Charlie Chaplin films. A lot of listening and practicing."

During our WBGO studio session, the JD Allen trio played three songs from Shine. "Son House" is a tribute to the masterful bluesman who penned legendary songs like "Death Letter Blues" and "John the Revelator." "East Boogie" is a nickname for one of Allen's compatriots, trumpeter Russell Gunn.

Finally, the trio blasts through some dark terrain in the title song. When asked about the meaning of the phrase, Allen invokes a passage in the Bible, Matthew 5:16: "Let your light so shine before men, that they may see your good works, and glorify your Father which is in heaven."

Each of these songs features Allen's calling card: a forceful tenor saxophone that blows mightily. Here's to a bright future.

The JD Allen Trio will be featured Aug. 12 on Live at the Village Vanguard.