Accessibility links
To Dope Or Not To Dope? On Saturday Lance Armstrong Twittered: "Had anti-doping control AGAIN." With the cycling titan out of retirement, competition is heating up on the Tour de France, and so is drug-testing. This year anti-doping agencies amped up urine and blood tests in an effort to root out the cheats who have marred the race in the past. Still, commentator Christie Aschwanden says nothing can dampen the allure of doping for some professional cyclists.

To Dope Or Not To Dope?

To Dope Or Not To Dope? 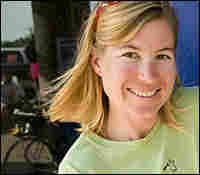 Now that the first week of the 2009 Tour de France has gone by without a major doping scandal, you might conclude that cycling has finally shaken its drug habit. But that would be a naïve assumption.

If you were a Tour de France cyclist, chances are, you would dope. Don't believe it? Then ask yourself this: Have you ever checked for cop cars, then broken the speed limit?

A few years back, a former Tour stage winner told me, "If you're in a race and you can take something that's not going to test you positive, most human beings are going to do it."

It's easy for us fans to forget, but for the average Tour de France rider, cycling is not some idealized pursuit, it's his job. "People in mainstream jobs drink four cups of coffee to be prepared for their 8 a.m. meeting — it's the same thing," another pro told me. A false analogy, perhaps, but one that reveals the doper's mindset.

Doping scandals have given cycling a bad name, but that's only because the sport has adopted some of the world's toughest anti-doping strategies. If basketball or football had the same rigorous testing programs that cycling does, they'd have more scandals, too.

Cyclists are no more or less honest than any other professionals. Like the bankers that got sucked into amassing bad mortgages because they saw their peers profiting from such schemes, cyclists are also tempted to adopt shady practices when they believe that everyone else is doing it.

And now there's ample evidence that everyone is doing it — more than a dozen of cycling's top stars have faced drug scandals in the last five years.

Even with these high-profile doping cases, the drug-testers have yet to pull ahead of the cheaters. Some of the highest profile doping scandals, such as the Operation Puerto affair, have resulted from police work, rather than drug tests. As the BALCO steroids scandal showed, for every new drug test, there's a rogue doctor or scientist standing by with a way to beat it.

The problem comes down to money.

Cyclists are as career-minded as any other professionals, and the reality is doping pays — even if you get caught. Numerous confessed and convicted dopers still make a good living from the sport. Former Tour de France champion Bjarne Riis has admitted to taking the banned blood booster EPO to win the Tour. He now oversees Team Saxo Bank, the squad that held the yellow leader's jersey for the first six days of this year's race. Likewise, former world champion David Millar's drug-enhanced results propelled him to fame. Millar never failed a drug test, but after getting caught with syringes of EPO in 2004, he admitted to using the banned drug. Rather than facing a lifetime of shame, he served a two-year suspension, then returned to the sport (and the Tour) with a purported mission to fight doping.

Even Floyd Landis, the American whose Tour de France win was rescinded after a positive drug test in 2006, has returned to the peleton with a pro contract.

Lance Armstrong's cycling comeback has reignited speculation about whether his seven Tour victories were drug-aided, but that line of inquiry misses the more important question: will the incentives to ride clean ever exceed the payoffs of taking drugs? My money is on no.