Accessibility links
Obama Backs Helping Hand For Long-Term Care The Obama administration says it favors adding a new and potentially expensive program as part of a health care overhaul. It has sent a letter to Congress indicating support for a new program to help people pay for living in a nursing home, assisted living or getting care at home. 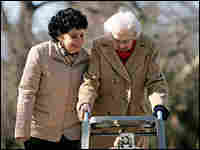 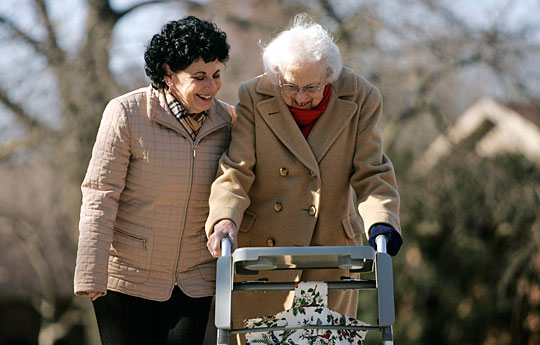 Until recently, it looked like long-term care was not going to be a serious part of any potential health care overhaul. But that changed when the Obama administration this week endorsed a new government social insurance program that would help people put aside money to pay for the high costs of going to a nursing home, assisted living or getting services needed to live at home as they age.

As the Senate Health, Education, Labor and Pensions (HELP) Committee marked up the long-term care part of a health care change bill Tuesday, Health and Humans Services Secretary Kathleen Sebelius sent a letter to committee Chairman Ted Kennedy with an endorsement. She signaled the Obama administration's support for something called the Community Living Assistance Services and Supports Act (CLASS Act).

That legislation, which is part of the committee's health bill, would let workers choose to have government deduct money from their paychecks — maybe $65 to $100 a month — and put it in a savings account. When they get old or disabled and need care, they could then use that money.

President Obama, the health secretary wrote to Kennedy, a key author of the long-term care provision, "believes it is appropriate to include the CLASS Act as part of health reform because enactment of this important legislation would expand resources available to individuals and families to purchase long-term services and supports to enable them to remain in their own homes in the community. The CLASS Act is an innovative voluntary program that will provide important benefits to people who need them."

But just days ago, the conventional wisdom in Washington was that long-term care was too expensive.

That changed when a Congressional Budget Office analysis said the CLASS Act would actually save money: Because if people delayed going into a nursing home or got home care that kept them out of the hospital, there would be a net savings for government.

The projected savings of $58 billion over 10 years, proponents said, could then help pay for expensive health care expansion.

Larry Minnix, of the American Association of Homes and Services for the Aging, the trade group for not-for-profit providers of care to the elderly and disabled, says the Sebelius letter is a big step. "It recognizes for the first time that insuring for the need for long-term services and supports is a vital part of health care reform. Seventy percent of American families will face some kind of disabling situation, and we're not insured for it."

But Republicans said adding long-term care would create a costly new program for years to come. Sen. Mike Enzi of Wyoming questioned the CBO's analysis. He says the real costs would come later. "Only in Washington could someone develop a policy that costs the taxpayers $2 trillion and call that a savings, and then use it to pay for more federal spending," he said during the hearing Tuesday.

Another Republican, Judd Gregg of New Hampshire, added an amendment that would require that the secretary of health and human services determine the monthly premium based on an actuarial analysis of what it would take to keep the program solvent over 75 years. The original legislation says the monthly premium would average $65 a month. But the CBO estimates that, even over the first 10 years of the program, a more realistic number might be $100.

It wasn't just Republicans who voiced skepticism. Some groups that represent people with disabilities are also angry. Bob Kafka, of the disability civil rights group ADAPT, said not enough is done for poor people who can't afford to have the money deducted from their weekly paychecks — or who, because of their illness or disability, may not be able to work at all. "Secretary Sebelius' letter adds insult to injury," said Kafka. "This administration has totally said to low income people with disabilities, 'You do not count.' "

Kafka's group endorsed the CLASS Act but wants it paired with passage of another bill called the Community Choice Act. That would allow people who get long-term care services through Medicaid to use that money for help to stay at home. Now, the only thing they are guaranteed is that Medicaid will pay for them to live in a nursing home — and home services are limited, require being on yearlong waiting lists, or are unavailable.