Accessibility links
In Pamplona, Bulls Run And Tourism Soars The annual running of the bulls got underway Tuesday in Pamplona. Thousands of daredevils from Spain and around the world participate in the ritual by sprinting in front of a pack of bulls in the narrow streets of the old town. 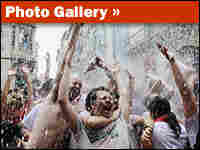 See photos of the running of the bulls

Runners flee bulls on a corner of a cobbled street in Pamplona, Spain, during the first day of the San Fermin running of the bulls fiesta. The ritual, repeated eight consecutive mornings during the festival, was made famous by Ernest Hemmingway's novel The Sun Also Rises. Denis Doyle/Getty Images hide caption 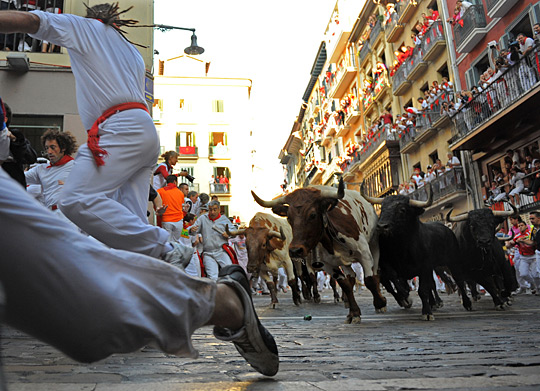 Runners flee bulls on a corner of a cobbled street in Pamplona, Spain, during the first day of the San Fermin running of the bulls fiesta. The ritual, repeated eight consecutive mornings during the festival, was made famous by Ernest Hemmingway's novel The Sun Also Rises.

The running of the bulls got under way Tuesday in Pamplona, Spain. Every morning for eight consecutive days, daredevils from around the world participate in the annual ritual by sprinting in front of a pack of bulls in the narrow streets of the old town.

The annual tradition persists despite a growing distaste for bullfighting in Spain.

The streets of Pamplona are strewn with broken bottles and slick from spilled sangria. The sun has yet to rise, and this northern Spanish city reverberates with the sound of many tongues, including American-accented English.

"I stopped drinking about 4 o'clock, so I'd get about a two-hour power nap," says Brian Melizon, a high school teacher from New York. "This way I'm ready to go. I feel good. I'm sober, I got all my wits, and that's the way I want to have it before this run."

About 2,000 runners are crammed into the narrow alleyways that pass for streets in the medieval heart of Pamplona. The runners are dressed in white and wear red bandanas to symbolize the martyrdom of the city's patron Saint Fermin.

Melizon says he often talks about the meaning of the festival with his students back home.

"It's part of the culture. It's part of the religion. And it's not about the killing of the bull, it's about the whole experience. It's religious, so it is what it is. We're here to expand our horizons, and ourselves as men," he says.

Nearly everyone is male. And many of them do see it as a kind of macho rite of passage. No one knows when the running of the bulls began. But it's been internationally famous since Ernest Hemingway wrote about it in his novel The Sun Also Rises.

A Campaign To End Bullfighting

Animal rights groups say the run torments the bulls, who meet their death later in the day in the bullring. In the last decade, the rights activists have held protests and appear to be winning some sympathy in Spain. Polls show most Spaniards have no interest in bullfighting. And in Catalonia, nearly 200,000 people have signed a petition asking the regional parliament to ban the ritual.

In Pamplona, some of the American visitors admit they are a bit queasy about bullfighting.

"I'd rather see this, the running of the bulls, but afterward, I'd rather not kill them" says Jay Quintano, a New Yorker whose grandparents are from Spain.

A bottle rocket marks the opening of the bulls' pen, and the beginning of the encierro — the 925-yard dash to the bull ring. The encierro can get bloody if a bull strays from the group. Fourteen people have been killed here in the last century, and many runners are gored.

This run was relatively clean. Reports said only four people were treated Tuesday for bumps and scrapes.

Afterward, Louis Goldstein and his friends Jim Heaney and Howard Shank feel the heady release of having survived without a scratch.

"Lot of buildup for a 10 to 12 second event. You kind of get real geared up, get the adrenalin flowing, then boom you start moving, and all of the sudden, the bulls are just on you and by you," Goldstein says.

Cynics would say the eight days of round the clock insanity and the free-flowing sangria are mostly for the tourists. But plenty of Spaniards say the festival is a vital part of their traditions.

Pamplona resident Ramon Moreno, in his mid-30s, has been running with the bulls since he was 13.

"Yes, it's crazy," he says. "But if you've been fed this with your mother's milk, then this is what you do."

Tourists Usually In Spain Stay Mainly Off The Planes July 3, 2009