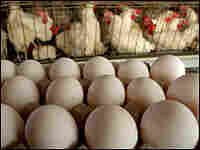 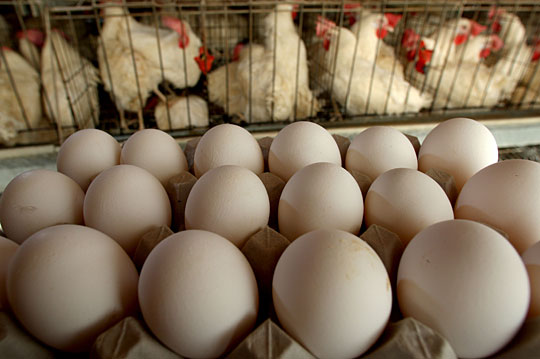 The Food and Drug Administration announced a new requirement that egg producers take more steps to prevent salmonella from infecting their flocks.

Learn more about the FDA's efforts on food safety.

The Obama administration has announced plans for aggressive rules aimed at making the nation's food supply safer. The moves come in the wake of a series of serious food outbreaks and concern within the food industry that people fear their food. Reaction so far has been positive, both from industry and consumer groups.

At the announcement of the new initiatives Tuesday, Vice President Biden set out to make one thing clear: Food safety is important to this administration.

"You know, my dad used to say if everything is equally important, then nothing is important. There have to be priorities, and this is one of those priorities," he said.

"We've seen too many large-scale recalls, everything from spinach to peanut products, pistachios, peppers, mushrooms, alfalfa sprouts and recently even cookie dough."

Five thousand Americans die from contaminated food each year, she said, and tens of millions get sick.

The administration is directing its agencies to design tougher production standards for marketers of poultry, beef, leafy greens, melons and tomatoes. The Food and Drug Administration and the U.S. Department of Agriculture will be designing a national food registry so contaminated food can be traced back to its source, and so consumers can be alerted immediately once a problem is discovered.

Meanwhile, the FDA announced a special initiative on eggs. Egg producers will have to buy chicks and young hens only from buyers who monitor for the salmonella bacteria. They'll have to have specific safety plans, eliminate rodents and pests, guard against bioterrorism, test regularly for salmonella, and refrigerate eggs during storage and transportation.

Food processors are anxious to see the details, but they are at least initially backing the administration's plans. The millions of dollars in lost sales in the last salmonella epidemic is fresh in their minds.

And some producers won't have to make many changes. The FDA adopted many of the egg-processing rules from states that have similar rules in place. Egg producers are hoping the regulations will assure consumers who are nervous now when they go to buy a dozen large grade A eggs.

"Industries don't often go out and say, 'Hey, regulate us,' but they've been supportive of the concept of an egg-safety regulation," says Howard Magwire, vice president of government relations for the United Egg Producers.

"For 100 years, we have attempted to find the needle in the haystack," he says. "And now starting today, the job of FDA and USDA will be to try to prevent needles from getting into the haystack in the first place."

Consumer groups too are generally pleased, although they, like the trade groups, are anxious to see the details. Caroline Smith De Waal of the Center for Science in the Public Interest wants more.

"We really don't have a good handle on the imports that are coming into the U.S.," she says. "And we're lacking a common structure, a common philosophy for food safety regulation."

Some of that common structure may come from legislation that's working its way through Congress now.