Accessibility links
Foreign Policy: Why Twitter Failed The Uighurs Commentator Evgeny Morozov says that given the current oversupply of Twitter experts, it's strange that nobody told the Uighurs that staging a protest in the week of Michael Jackson's funeral is not going to propel them into the top charts of Twitter's most discussed items. Morozov says that's a shame--Michael Jackson is still topic number one on Twitter, and the Uighurs are not even in top 10. 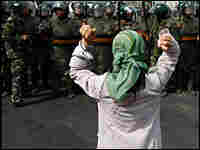 An Uighur woman protest before a group of paramilitary police, Tuesday, July 7 , 2009. Ethnic Uighurs scuffled with armed police Tuesday in a fresh protest in the western Chinese region of Xinjiang, where at least 156 people have been killed and more than 1,400 people arrested in western China's worst ethnic violence in decades. Ng Han Guan hide caption

Given the current oversupply of Twitter experts, it's strange that nobody told the Uighurs that staging a protest in the week of Michael Jackson's funeral is not going to propel them into the top charts of Twitter's most discussed items. What a bummer – Michael Jackson is still topic number one on Twitter, the Uighurs are not even in top 10, and the Internet-savvy whizzes of the State Department are nowhere to be seen.

I'd leave the discussion of geopolitical repercussions of the Uighur riots to my more qualified FP colleagues, zooming in on what they tell us about technology. There is very little that we know for sure; Twitter and YouTube have been reported to be down; mobile networks offer a very spotty service, and the overall connectivity in the region appears to be rather poor. It's quite logical to speculate – as many China-watchers and most of the media have done already- that the government is trying to thwart communication between the province and the rest of the world, as this would inevitably undermine their own accounts of what had happened.

What I find really interesting is the Chinese government's increasing eagerness to turn off Internet connectivity (thus blocking access to all web-sites) as opposed to selected and well-targeted censorship, that would leave most web-sites untouched. In a sense, this could be their response to the Cute Cat Theory: since activists would always find huge non-activists sites (like Facebook) where they can hide their protest activities, it may be easier for the government to simply shut down the entire Internet – at least, for a short time.

To me, this reflects the impending failure of the targeted approach: the ingenuity of activists has made every web-site into a potential target and, as such, has made targeted censorship useless (e.g. you block Facebook and the same people resurface on MySpace, or GoodReads or some obscure web-site for cat lovers). Granted some unique web-sites would continue serving as targets: YouTube may simply be the best-known and the easiest to use video-sharing web-sites, so it may make sense to continue blocking it and thus preventing a very small percentage of netizens of sharing their videos, but it's naïve to think that if they really-really want to, they won't be able to upload them elsewhere. So what would replace targeted censorship? Perhaps, a combination of spin – as today's New York Times documents in an article on China's new information strategies and as I have also documented on its pages– with comprehensive Internet black-outs during sensitive events.

Now, this may be a very unpopular position, but let me try to advance a little thought experiment. Suppose that much of the recent criticism of online activism (or "slacktivism") is actually right, i.e. online campaigns add little value (while also providing great distractions to real activists). If so, a rational authoritarian government would not actually mind having its people sit by their monitors and think that they are affecting change via Facebook; after all, better give them an illusion of being in control and having some autonomy. From their perspective, where the Internet does get dangerous is when it accompanies some big real-world events – elections in Moldova or Iran or the deaths of the two Uyghur workers – this is also when it needs to be blocked/restrained, especially if the objective is to ensure that nobody could challenge the government's version of events (hence, the rapid growth of the "spinternet").

If true, this could actually be a very big blow to the cyber-utopians who are trying to argue that ther eis some magic role that technology plays in igniting the protests. Their ideal scenario is that 2 random people find each other via the Internet, find out that both are dissatisfied with some public service, decide to protest, share planning tips on an Internet forum, 100 people read their messages, and here you go – 10,000 people gather in some central square to topple the government. Personally, I believe that this is science fiction; I grant that this may have happened once or twice on a much smaller scale, but I strongly believe that politics as well as many other social, cultural, and economic factors usually play a much greater role in actually igniting the protests; 99% of discussions of people dissatisfied with public services only helps to blow their steam off and thus, actually, benefits the government.

The problem with the current media narrative of a "cat and mouse" game is that much of this narrative has been built by the media itself. First, the media finds a story of the next Twitter revolution, blows it out of proportion by manipulating (or simply misunderstanding) the facts, and then this story is accepted as an explanation of what happened. Thus, having read many accounts of the Twitter Revolution in Moldova, it's no surprise that the Iranian authorities tried to ban Twitter; whether it played any role in igniting the protests is beyond the point – there is no way that Iranians would not try to block Twitter given that it has been lauded by almost every single media outlet out there as the next revolutionary tool. Ditto the Chinese: what self-respecting Communist party wouldn't ban Twitter given that it's often been singled out as one of the reasons why so many Iranians gathered in the streets of Tehran?

But then the fact that the Iranians and the Chinese tried to ban Twitter only makes all of us even more convinced that they got banned it for a reason: they must have feared its great political potential! Nobody stops to think if this potential actually exists though; we often forget that the fact that something is blocked does not necessarily mean that it has been (or will be) instrumental...This only perpetuates the fears of other authoritarian leaders – and so it goes... At moments like this, I feel that may be it's okay that Michael Jackson is still topic number one on Twitter – at least, this is what it was designed for and most of those discussions DO fit quite nicely into 140 characters...