Accessibility links
Hot And Bothering: Media Treatment Of Sarah Palin Political pundits began speculating about sleeping with Sarah Palin when she burst onto the national stage last fall. Now a recent Vanity Fair article, which put Palin's good looks front and center, coupled with Palin's surprise resignation has excited pundit slobber all over again. Commentator Jennifer L. Pozner is fed up, and she's sticking it to the men (and women) perpetrating this coverage. 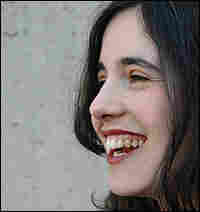 Jennifer L. Pozner is the founder and Executive Director of Women In Media & News, and editor of WIMN's Voices, the group's blog.

Think carefully: Can you remember any passionate TV news debates about whether journalists or voters might want to get naked with Dick Cheney?

No? Good. Because such an insulting, irrelevant topic would — and should — never be considered newsworthy. Unfortunately, this sort of drivel frequently passes for journalism when the politician at the center of the story is female.

Take Alaska's soon-to-be-former governor, Sarah Palin. When she dropped her resignation bombshell — dubbed "breathless ... girlish burbling" by New York Times columnist Maureen Dowd — CNN's Rick Sanchez wondered, "Hey, could she be pregnant again?" while others chalked it up to post-partum depression. Meanwhile, MSNBC analyst Donny Deutsch told Morning Joe viewers that the Quittah from Wasilla is divisive specifically because "this is the first woman in power with sexual appeal. ... We're used to seeing a woman in power as nonthreatening."

Shortly before Palin's declaration of independence from her job, politicos were buzzing about a Vanity Fair expose highlighting the poor opinion of Palin among the GOP's own brain trust. Editor Todd S. Purdum's interviews and analysis were solid, yet he still felt the need to wax on about the "pheromonal reality" that Palin "is by far the best-looking woman ever to rise to such heights" and "the first indisputably fertile female to dare to dance with the big dogs."

So, Palin's polarizing because she's ... hot? Not because she has complained about "the politics of personal destruction" — after insinuating that Barack Obama was a terrorist? Or because she champions a staunchly anti-abortion, anti-gay "values" agenda, yet has been dogged by a litany of alleged ethics violations? Or because she joined a White House campaign while demonstrating an embarrassingly flimsy grasp of foreign affairs?

Unfortunately, ethics and policy positions often take a back seat to ... other positions in pundits' fantasies. Just after Palin burst on the national stage, Deutsch decreed her "the new feminist ideal" to "sell a woman in power," because "women want to be her; men want to mate with her." Though critics will attack her on issues, Deutsch told CNBC that "It doesn't matter. ... I want her laying next to me in bed. That's the way people vote." (More wisdom from Deutsch-land? Hillary Clinton lost because "she didn't put a skirt on!")

He wasn't alone. When we wondered who McCain's running mate was, Yahoo News linked readers to "Her workout, eating habits," cable news cranks called her a "naughty librarian," and CNN anchor John Roberts suggested that becoming VP might take too much time away from her kids.

The ugly, nonpartisan truth is that corporate media have always seen women in power as threatening. That's why they trivialize women who dare seek office by obsessing over their bodies, hair, shoes, makeup, and motherhood — as if these have anything to do with their abilities and track records. Whether it's cable news branding Hillary Clinton a "bitch," The New York Times reporting that Condoleezza Rice wears a size 6, or The Washington Post detailing Loretta and Linda Sanchez's hairstyles, housekeeping preferences and "hootchy shoes," journalistic double standards condition us to consider women as ladies first, leaders a distant second — and inherently less qualified. We'll never know how many talented people were dissuaded from politics because they knew it would be significantly harder for them to run, win, and govern.

Still not convinced? Consider the bipartisan parade of male politicians whose arrogance, greed — and, let's be frank — penises have been responsible for endless ethical and legal breaches. They've paid prostitutes (David Vitter; Eliot Spitzer), sexually harassed pages (Mark Foley), cheated on their wives with staff members (John Ensign; John Edwards), redefined "hiking the Appalachian trail" (Mark Sanford), and committed flagrant corruption (Rod Blagojevich; Ted Stevens). Yet it is Sarah Palin — not these immoral, egomaniacal hypocrites — whom the press has diagnosed as mentally ill, questioning whether she has "narcissistic personality disorder." Apparently, breaking laws and vows is just something "the big dogs" do, but if a self-centered woman inappropriately spends campaign cash on clothes and surrounds herself with sycophants, she is clinically insane.

Ironically, though Palin has railed against unfair treatment by the mainstream media, she has mostly been referring not to blatant sexism but to reporters who wouldn't show her "respect and deference." The last thing journalists owe any politician is deference. We need news media to subject all our leaders to tough scrutiny — not smarmy, gendered taunts meant to remind us that the most powerful women in America are, ultimately, just girls.