Accessibility links
In Boston, Rival Painters On Dazzling Display An exhibition at the Museum of Fine Arts is both an art history lesson and a celebration of the most sumptuous works of Titian, Tintoretto and Veronese. 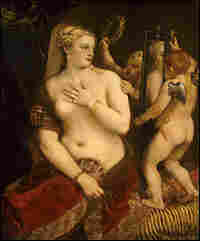 Venus with a Mirror, circa 1555, Titian, National Gallery of Art, Washington Courtesy of the Museum of Fine Arts, Boston hide caption

toggle caption
Courtesy of the Museum of Fine Arts, Boston 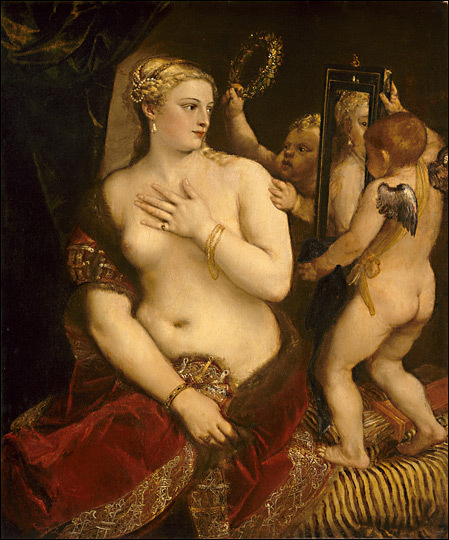 Venus with a Mirror, circa 1555, Titian, National Gallery of Art, Washington

Courtesy of the Museum of Fine Arts, Boston

The subtitle of the thrilling new exhibition at Boston's Museum of Fine Arts is Rivals in Renaissance Venice. The premise of the show is that the three greatest artists of 16th century Venice — Titian, Tintoretto and Veronese — not only knew but imitated each other.

Titian was the old master and painted into his late 80s. The younger Tintoretto was one of Titian's students, but Titian, perhaps threatened by his student's brash talent, turned against him and instead championed the even younger Veronese.

The major selling point of this show is the interrelationship among these artists. We have in some cases our very first chance to compare, side by side, their different versions of the same subjects: religious scenes, portraits, nudes. Titian's psychological profundity and structural mastery are set against both Tintoretto's dark and sometimes even vulgar theatricality, and Veronese's more pastel elegance and refined sentiment, which can sometimes turn merely decorative and sentimental.

It's a fascinating study. Curator Frederick Ilchman managed to get the major museums of Paris, London, Madrid, Florence, Vienna, New York and Washington to lend their masterpieces, as well as many smaller, out-of-the-way institutions and even some private collectors. Given skyrocketing insurance and the increasing costs and risks of long-distance transportation, shows on this level will surely get rarer and rarer.

The comparisons are eye-opening, but I'm not really sure they're the soul of this exhibit. For me, the real joy is not the art history lesson but the spectacular paintings themselves, to which each artist fully brings his own identity.

Titian was one of the first artists to use canvas instead of wood for his larger commissions, which gave him and his followers a new way to move paint around a surface and so allowed for a greater sensuousness of textures, especially in the depiction of both cloth and skin, human and animal.

Tintoretto's ravishing Susanna and the Elders shows the blinding white flesh of the naked Susanna, her left leg dipping into a pool, her mirror and exotic toiletries laid out before her, while two dirty old men crouch behind a hedge to sneak a peak. Is Tintoretto suggesting that each of us onlookers is like those dirty old men? Or the artist himself? His rakish early self-portrait suggests that that's exactly the kind of person he might become; yet his world-weary late self-portrait, the last painting in the show, suggests that his life didn't at all turn out that way.

The great Veronese work in the show is his famous allegorical Venus and Mars United by Love, a dazzling image of the triumph of love over war, the legs of the two gods being bound by Cupid, as Venus squeezes drops of milk from her breast. But I also love Veronese's two tender, life-size portraits of an aristocratic family, one canvas showing the powerful father with his arm around his playful young son, the other showing his shy wife, with their even shyer young daughter peering out, wide-eyed, from behind her mother's dress. We can't really know this complicated family without seeing both these paintings, but this is the first time in centuries that they've been on the same wall, or even on the same continent.

Then there are the Titians: the sweet rustic Virgin Marys — one of them with a rabbit — in his early paintings; the alluring mythological Titian blond nudes; the sinister pope who clearly doesn't trust anyone; and the young Ranuccio Farnese, one of the great portraits of a child, who will soon surely grow into his lavish, oversize clothing and codpiece. Titian actually paints himself into his late religious paintings — as a witness to Christ's entombment and as the suffering St. Jerome at the foot of a cross. What is the mysterious connection between being an artist and religious devotion?

And there's Titian's even more mysterious painting of a strange child — is it the baby Bacchus carrying a bunch of grapes in his skirt? — hugging a noble dog that's standing careful guard over a mother dog nursing her puppies — all of them set against a turbulent, swirling, gorgeously painted landscape. What's this painting about? Do any of the other rooms of paintings supply a hint? Or is this the real mystery of art, beyond art history, beyond explanation, yet utterly mesmerizing, moving and unforgettable?