Accessibility links
Progressive Rock Gets Mordantly Witty Porcupine Tree mixes the virtuoso musicianship of progressive rock with modern electronic and guitar effects. The title of its song "Sentimental" takes a sly jab, given its bleak surroundings on Fear of a Blank Planet, the band's saga of numbed-out teens of the future. 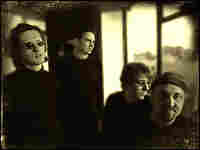 For 20 years, the London band Porcupine Tree has been mixing the virtuoso musicianship and multi-part songwriting of progressive rock with modern electronic and guitar effects. That mixture wears well alongside the band's bitter, mordantly witty lyrics: Even the title of "Sentimental" takes a sly jab, given its bleak surroundings on Fear of a Blank Planet, Porcupine Tree's saga of numbed-out teens of the future.

The song opens with spare, echoed piano chords, fleshed out by Gavin Harrison's light, painterly jazz drumming. With a pure, reedy voice, singer Steven Wilson sings some harsh, straightforward words: "Never want to be old / and I don't want dependents." As elegant, chiming guitars pile up behind them, Wilson and guest singer John Wesley slur the chorus in a way that makes the words sound like wind rattling through dead branches: "Stoned and alone the kids play / and in this way / they wish away each day." There's a blustery break in the middle where guitars and pianos rage and thunder, but that's fleeting. As the swells subside, Wilson's solo voice repeats the chorus, exiting in a smoky haze of phased guitars and a sweet, blue emotional funk.