Accessibility links
Maia Sharp: A Songwriter Set To Arrive Los Angeles-based singer Maia Sharp may be on her fourth album, Echo, but she's mostly made her living writing songs for other performers, including Cher, Dixie Chicks and Bonnie Raitt. After a few brushes with success, this time around, Sharp feels like she's ready to break through.

Girl on Her Way 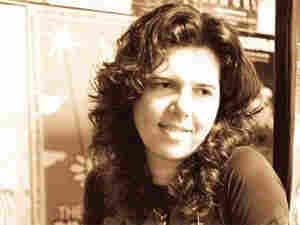 Having penned songs for Bonnie Raitt and others, Maia Sharp feels like she's ready to break through. Courtesy of the artist hide caption

Los Angeles-based Maia Sharp may be on her fourth album, Echo, but she's mostly made her living writing songs for other performers, including Cher, Dixie Chicks and Bonnie Raitt.

"Bonnie Raitt, I gotta say, was at the top of my list," Sharp says. "It was kind of the holy grail of songwriting. Apparently, I had been on her radar for a while. I didn't know this until we met in '05. On her record, Souls Alike, she sang a few of my songs on that, and it just was amazing."

On Echo, Raitt provides vocals for "Death by Perfection."

"It's trying to appreciate the imperfections and maybe even celebrate them, and being OK with something just being what it is — there's no need to change it if you love it," Sharp says.

For Sharp, "Death by Perfection" felt like the "right palette for a Bonnie Raitt vocal." She sang melody for Raitt, but Raitt recorded something different. In an interview with Melissa Block, Sharp says that when Raitt tried to apologize, she replied, "Don't ever sing what I sang you. Sang what you just sang, because it blows away mine. She just owned, as she always does."

"John Q. Lonely" sets the scene of a man alone with a cupcake on his 50th birthday. Sharp says it's about a man finding freedom in solitude.

"You don't find out until the end that he has lost in love," Sharp says, "but his attitude is: 'Why would I ever want to go there? Who even needs that? I have everything I need alone. What could I love more than my freedom?' "

Sharp feels for a character who's never loved in his past, but says she doesn't feel the way he does.

The last song on Echo, "The Girl on Her Way," features just Sharp and a piano. It's a poignant and crushing song about expectation and people who are expected to do great things, but fall short.

"This album, of all my albums, I feel like it has the most truth in it," Sharp says. "I feel like there's some truth in every song. The last song is the truest of all, but I feel great having written it and gotten it out of my brain and my stomach and onto the album. It's really the most cathartic song that I think I've ever written."

After many of her own brushes with success, Sharp says she feels like Echo is more an "arrival than an on-the-way."