Accessibility links
Tornado Potato Taking Boardwalks By Storm There are few things more appealing than french fries — unless you count food on a stick. Combine the two, and you get the artery-clogging, mouth-watering Tornado Potato, the hit of fairs nationwide. Richard Crossley, co-owner of Tornado Fries in Wildwood, N.J., says one of the beauties of the dish is that you can take your time munching it. 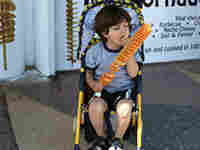 There are few things more appealing than french fries — unless you count food on a stick. Combine the two, and you get the artery-clogging, mouth-watering Tornado Potato that is the hit of state fairs nationwide.

The spiral-cut potatoes are skewered and deep fried, their rings cascading down the length of the stick.

"One of the beauties of them: The way that they're cut, they actually stick to the stick that they're on, so you can pull a piece off at a time," Richard Crossley, co-owner of Tornado Fries on the boardwalk in Wildwood, N.J., tells Robert Siegel. "So, you can take your time munching on them."

The delectable dish had to cross oceans before making its way to the Wildwood boardwalk. Two years ago, a picture of one from South Korea began circulating on the Internet and sparked the imagination of fried-food fans everywhere.

Crossley says he loved the concept and the visual; his love for potatoes also helped, he says.

"But the idea for me was to franchise it, and we've already had a lot of interest in that," he says. "I expect to have stores all over South Jersey on the boardwalks next summer based on the success that we've had so far."

The Tornado Potato's one drawback: It can be shared easily.

"One person can hold the stick and multiple people can actually pull pieces off if they like," Crossley says.

He says his establishment sells two sizes of the spiral-cooked potato: 18 inches and 26 inches. One of the problems of the larger size, he says, is that the stick sometimes bends under the weight of the potato. That, of course, does little to deter customers.

"People love that, obviously, because people like things on a stick," Crossley says. "The bigger the stick, the more impressive it is."