Accessibility links
Chick Corea, Jack DeJohnette, Bobby McFerrin: A Night Of Improv The tour was short and the focus was tight as Chick Corea, Jack DeJohnette and Bobby McFerrin rode jazz improvisation into new orbits with splashes of vaudeville and circus. From the 2008 Gilmore International Keyboard Festival in Kalamazoo, Mich., this is the only radio version of their performances. 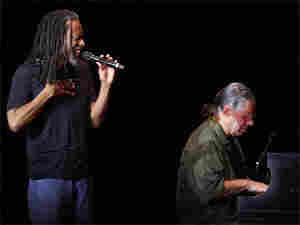 The tour was short and the focus was tight as Chick Corea, Jack DeJohnette and Bobby McFerrin rode jazz improvisation into new orbits with splashes of vaudeville and circus. From the 2008 Gilmore International Keyboard Festival in Kalamazoo, Mich., this is the only radio version of their performances.

On the following dates, in the following cities, each show features 90 minutes of winging it, with critics and other writers keeping track of what took place. Here's a look at the tour as it unfolded toward Kalamazoo.

"The improvisation was musical, but it also was theater. The three danced a few moments, maybe an old-man stomp. One could picture in them Sid Ceasar, Ernie Kovacs and Robin Williams speaking gibberish as if they're playing cards, reviewing the good old days or arguing. Corea was heavier than expected while McFerrin was thinner. When DeJohnette sat at the piano, his arms seemed so long. All had gray in their hair. That maturity is key." --Ben Pollack, Concerto in Improvidoodle (Read more.)

"At one point, all three musicians were at work together making sounds underneath the lid of Corea's piano. At other times, one would lay out and pantomime a march or a drum roll while the other two made music. Paradoxically, it was only when McFerrin used a high-pitched voice to order Corea off the piano bench — "Move over, daddy!" — that the music settled into a deep blues groove." --Charles Donelan, Santa Barbara Independent (Read more.)

"Corea and DeJohnette, each brandishing drumsticks, began a mock sword fight that wound up with the pair rolling around onstage. McFerrin accompanied [with] guttural sounds straight out of a samurai movie... [There were] virtuosic individual solos from each artist; startling sounds and textures ranging from subtle lyricism to outright bombast... at the close of the performance, the crowd, eager for an encore, urged the trio to come back by spontaneously singing a musical phrase McFerrin had taught them a few minutes earlier." --Don Heckman, Los Angeles Times (Read more.)

"This is the only performance I have ever paid money to attend and yet left before the end because it was so terrible. The masterful performance of Chick Corea was amazing when he was allowed to shine and pleasantly complemented by the performance of DeJohnette. The senseless noise-making of Bobby McFerrin gave me a headache." --DC, UMS — Be A Critic (Read more.)

"[DeJohnette] didn't solo until well more than an hour into the set, but when he did he proved he is still, in his mid-sixties, if not the greatest working drummer in jazz then certainly among the top few... Corea's piano runs were of course impressive, but he seemed to be having as much fun coaxing harpsichord-like sounds out of a smaller keyboard, plucking the piano strings demonically, clanging cowbell and finger cymbals, twanging a Jew's harp and harmonizing with the other two... [McFerrin] yodeled. He mimicked Billie Holiday so convincingly the audience roared approval. He dropped in bits of blues, hillbilly and opera... All three brayed like farm animals and led the audience in a sing-along." -- Jeff Tamarkin, JazzTimes (Read more.)

"They just played, in every sense of the word: McFerrin channeling everything from Billie Holiday to, um, possibly some kind of space alien; Chick Corea reaching into the piano to pluck and damp the strings and going over to the other side of the stage to hang out by the drums and play some cowbell; Jack DeJohnette singing and joking around and managing to make the percussion into an entire orchestra somehow... Most everyone in the audience was spellbound and grinning." --Anne Haines, Land Mammal (Read more.)

"There were tons of great surprises at the sold-out performance... Fourteen members of the Western Michigan University's jazz vocal group Gold Company briefly improvised with McFerrin onstage... When patrons thought they'd get an encore, the musicians returned and entertained questions instead... Guessing what would come next made the show fun and memorable." -- William R. Wood, Kalamazoo Gazette (Read more.)