Accessibility links
Veterans Call Out Obama On 'Don't Ask, Don't Tell' Nearly six months into his presidency, Obama has yet to make good on a promise to end the long-standing ban on openly gay service members. Now a group of veterans has launched a national campaign to push for the repeal of the policy. 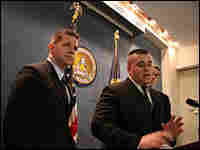 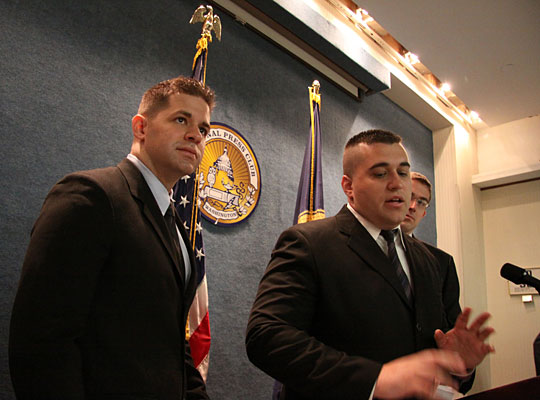 Veteran Jarrod Chlapowski and Servicemembers United executive director Alexander Nicholson speak Thursday at the National Press Club in Washington, D.C., during the launch of a national tour to support the repeal of "Don't Ask, Don't Tell."

In 1948, President Harry Truman signed an executive order ending racial segregation in the armed forces. In the 2008 presidential campaign, candidate Barack Obama promised to end another kind of discrimination in the military: the long-standing ban on gay service members. But nearly six months into his presidency, he has yet to make good on that promise. Congress also has taken no action.

Now the latest push is coming, at least in part, from elsewhere. Former Army linguist Jarrod Chlapowski told reporters in Washington on Wednesday that he and others hope to make a national cause of repealing the "don't ask, don't tell" policy, which prohibits openly gay people from serving in the military. The Clinton-era law has led to the dismissal of more than 13,000 gay service members.

"Over the next two months, a group of young Operation Iraqi Freedom and Operation Enduring Freedom-era vets, both gay and straight, will be touring the country, bringing the issue to America's doorstep," Chlapowski said at the National Press Club.

They're calling it the Voices of Honor tour. It initially targets eight major cities in swing voting districts.

Army Staff Sgt. Genevieve Chase, an Afghanistan war veteran who is straight, said she's joining the tour to try to refute the view held by some that openly gay service members undermine troop readiness and cohesion.

"I'm here to tell you that gays have been and are already serving openly," she said. "Unit cohesion across the spectrum of the military is better than it has ever been, because our generation embraces diversity."

Pennsylvania Democratic Rep. Patrick Murphy, a former paratrooper and the first Iraq war veteran elected to Congress, is leading a drive in the House to win support for a bill that would repeal "don't ask, don't tell" and ban discrimination in the military based on sexual orientation.

Because Congress enacted "don't ask, don't tell," Murphy says, it should be Congress that repeals it. He says President Obama is doing the right thing deferring to lawmakers.

"The president has a respect of the Congress," he said. "And he understands he doesn't want to do an executive order that says, 'Ahh, just ignore what the Congress passed 16 years ago. He's saying, 'Give me a bill on my desk, and I'll sign it.' Now it's our job to do exactly that, and that's what this tour's all about. That's what this effort's all about, and we're gonna get it done."

So far, Murphy has persuaded 151 Democrats and one Republican to co-sponsor his bill. He is also encouraged that House Armed Services Committee Chairman Ike Skelton has agreed to hold full committee hearings on the issue. But the chairman of the Senate's Armed Services panel, Carl Levin of Michigan, has no plans for such hearings.

"I haven't gone there, because there's been no reason to go there until I think that there's a real chance of ending it, you know, of changing the policy," Levin said. "And I have not felt that, until recently, that there was a real chance of changing this policy ... because the administration did not support that change at this time. I think they do support the change at a different time when they may be able to actually succeed."

Levin says he does support the repeal of "don't ask, don't tell," unlike some other key senators on his committee.

"'Don't ask, don't tell' is a policy I think has served the country well," said South Carolina Republican Lindsey Graham, a prosecutor in the Air Force Reserve. "Why should we change it? I'm not going to be persuaded to change military policy by a bunch of political activists. If the military leadership tells me that 'don't ask, don't tell' needs to be changed, I'll certainly be open-minded to that."

At another National Press Club event Wednesday, the chairman of the Joint Chiefs of Staff, Adm. Michael Mullen, had this to say about the policy: "The strategic intent of the president is very clear: He wants to change this policy ... and that will also take a change in the law."