Accessibility links
Skin Whitening A Global Practice In the U.S., many associate skin whitening with late pop star Michael Jackson, who transformed from a caramel-colored boy into a white-skinned man. But an obsession with skin whitening is common in parts of Africa, Asia and the Middle East. 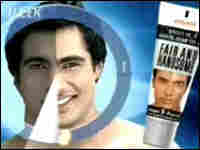 See The Controversial Ad For A Popular Skin Whitener 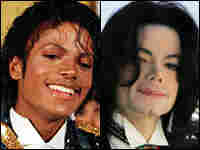 Michael Jackson in 1984 (left) and 2005. The late pop star said his skin lightened as a result of vitiligo, a depigmentation disease. Critics say Jackson had a cosmetic procedure because he was unhappy with his naturally dark skin. (Left) AP; (right) Getty Images hide caption

"It doesn't matter if you're black or white" may have been one of Michael Jackson most famous musical lines, but since his death, it still seems to matter to many of his fans.

The late King of Pop claimed he suffered from vitiligo, a skin disease that causes depigmentation, resulting in patches of milky white skin. But many believe he purposefully underwent procedures that turned the entirety of his skin from a darker brown to white.

The concept of skin lightening is uncommon in the U.S., and the chemicals that help to lighten skin are banned in many developed countries. But around the world, millions purchase such products every year.

"Different countries have different standards of beauty," says Radhika Parameswaran, an associate professor at Indiana University who has studied skin lightening trends for more than six years. "And lightness is associated with status that is particular to each culture."

Skin lightening products account for nearly half of the cosmetics industry and are in high demand in Asia, Africa and the Caribbean, though the products can often cost $5 a bottle and the chemicals used in them can cause health defects such as scarring of the skin, or even cancer.

But for the many who lighten their skin, the trend can be traced back to periods of colonization, when white skin was often preferred.

"In South Africa, we had a white government that dominated black people," says Pinky Khoabane, a columnist for South Africa's Sunday Times. "And the lighter you were the better the opportunities."

Though skin lightening products are technically banned in South Africa, they are available on the black market and still commonly used. Khoabane says she knows many South Africans who lighten their skin, and sometimes even change their name, for better job opportunities.

Commercials and advertisements for skin lightening products are often not shy about suggesting the lighter the skin, the more likely the chances of meeting a beautiful girl or landing a dream job. One ad for Active White shows a woman with glowing white skin after using the product and then asks, "What man could resist her?" And another controversial ad for Emami's Fair and Handsome that ran in India in 2007 showed the most famous Bollywood actor trying to wipe away the skin of a dark brown man's face.

With this type of advertising, Khoabane says it can only be expected that people use these products and go to extreme measures to change their skin color.

"We live in a society which is basically saying to us, we've got all these resources and products, and if there is anything about you we don't like, we can find a way of changing it."

And according to Parameswaran, the trend is only growing, with more marketing now targeting men and younger women and advertising across economic lines. She says it will be a while before the popular American phrase "black is beautiful" makes its way to a majority of the world.

Hear the full conversation with Pinky Khoabane and Radhika Parameswaran by clicking the "listen" button in the upper left-hand corner.