Accessibility links
Lyrics As Shorthand: Soundtracking 500 Days Of Summer From the opening narration of the new romantic comedy 500 Days of Summer, you get an idea of the dry humor of the movie, which is infused with music. That should comes as no surprise, since director Mark Webb got his start directing music videos. NPR's Melissa Block spoke to him about the role music played in his new film.

Watch Clips From The Movie 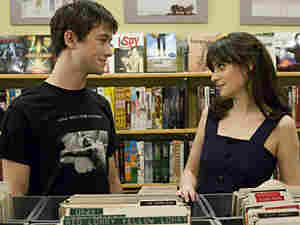 "The boy, Tom Hanson of Margate, N.J., grew up believing that he'd never truly be happy, until the day he met The One. This belief stemmed from early exposure to sad British pop music and a total misreading of the movie The Graduate."

From the opening narration of the new romantic comedy 500 Days of Summer, you get an idea of the dry humor of the movie, which is infused with music. That should comes as no surprise, given that director Mark Webb got his start directing music videos. NPR's Melissa Block recently spoke to him about the role music played in his new film.

As it happens, Webb takes issue with his debut feature film being called a romantic comedy. He says it's a "coming-of-age story masquerading as a romantic comedy, if you want to get technical." It's the story of two 20-somethings who work at a greeting-card company.

The first time they meet, in an elevator, the main character is listening to his iPod. Character Summer Finn hears The Smiths leaking from his headphones and shares her love of the band, and that's all it takes.

"I think we all can relate to this idea that, when someone likes the same music you do, it can be a very powerful thing," Webb says.

The writers chose The Smiths on purpose: The singer and co-writer of most of the band's songs, Morrissey, is viewed by many as the bard of heartbreak.

"I feel like you can say things lyrically — where you're using the singer as a narrator — that characters can't say in an explicit way," Webb says. "When it comes to the lyrics of a song, somehow it just bypasses your conscious brain and lets the audience know what's going on."

Asked if he'd ever wanted to include a song so much that he ended up changing the script to fit the music, Webb recalls replacing a song written for a montage scene with a Wolfmother song called "Vagabond" — a track that beefed up the moment and provided an opportunity to match the music with the visual.

"The way that the image and the music dance is something you can only do in the movies," Webb says. "I love that."

Getting The Actors In The Mood

Webb says he spoke to the lead actor, Joseph Gordon-Levitt, about the music in 500 Days of Summer and was surprised to learn that actors don't usually know what the music will be before they start shooting.

"That, to me, just seems strange," Webb says. "Because it lets them know the tone you're after. And I think that's a really important thing for an actor to know or to feel before you shoot a scene."

Before Webb began shooting 500 Days of Summer, he gave his two main actors, Gordon-Levitt and Zooey Deschanel, iPods with each day on their schedule broken down. He included songs that he'd been listening to when breaking down the script with the goal of conveying the feeling he was going after on each day of shooting.

In the movie, after Tom has one particularly stellar night with Summer, he walks out of her house with an uncharacteristic swagger in his step. As he walks around, everybody else is just as happy, exchanging high-fives and fist bumps left and right. A dance routine breaks out. And it's set to Hall & Oates' "You Make My Dreams." Webb admits that particular song is probably overused in movies — but that's part of the joke.

"It's like a shorthand for joy," he says. "We're trying to relate what's going on inside somebody's head, not the objective reality of it."