Accessibility links
Uneasy Riders: Adults Learn To Master Two Wheels A growing number of adults who either never learned how to ride a bike or took a nasty spill when they were young have swallowed their pride and enrolled in Bike Riding School in Somerville, Mass. Students like Lisa Moris are taking life lessons from their wobbly experience. 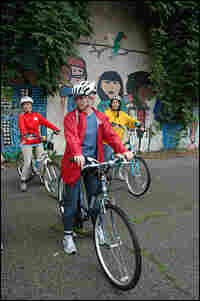 Annie Choquette (from left), Stephanie Marin and Eunmi Cho have climbed mountains and run marathons, but they are just now learning how to ride a bike at a school in Somerville, Mass. Tovia Smith/NPR hide caption 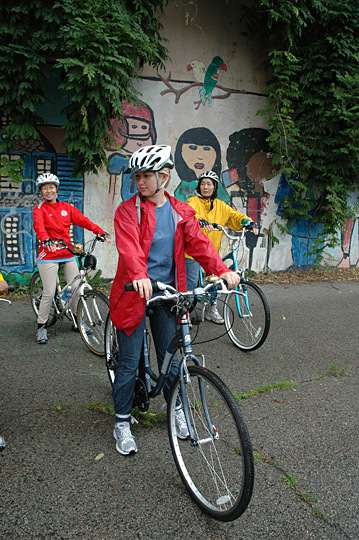 Annie Choquette (from left), Stephanie Marin and Eunmi Cho have climbed mountains and run marathons, but they are just now learning how to ride a bike at a school in Somerville, Mass.

For many, it's a rite of passage: Around the time you lose your first tooth, you also learn to ride a two-wheeler. But for others, it never happens. And it becomes more and more embarrassing to try to learn with every year that passes.

Now, a growing number of adults are trying to find out what they've been missing. They've swallowed their pride and enrolled in Bike Riding School in Somerville, Mass. And for many, the hardest part of learning to ride a bike is admitting they need the help.

"Every time I say, 'I don't know how to ride a bike,' people laugh out loud," says Lisa Moris, 27. Beside her, 22-year-old Stephanie Marin laughs and nods.

"That's pretty much what happens to me," Marin says.

For the most part, these are accomplished adults — engineers, executives and professors — who are both athletic and adventurous. Moris and Marin have climbed mountains. Annie Choquette has run the Boston Marathon. But none of them can ride a bike.

Choquette, who is from Korea, says bike riding wasn't taught to girls where she grew up. Other students say they took a bad spill when they were kids and never got over it. And others, like Moris, never had a chance to learn.

She was on vacation on Cape Cod, and when all her friends rented bikes, she had to ride an adult-sized tricycle. Then, to make matters worse, she ended up crashing it.

"It's apparently not an easy thing to do, but I managed to do it," she says. "Everyone was staring at me."

Now she's determined to ride a two-wheeler. Maybe not today, "but there are four sessions," she says.

Known as the Bike Whisperer, instructor Susan McLucas has taught riding for 20 years. She gets her students suited up in helmets, kneepads and elbow pads and brings them to a large blacktop behind a local school.

Everyone's seats are lowered so they can reach the ground flat-footed. And the pedals are removed.

"The pedals would just hit them in the shins," McLucas explains. The first assignment is to simply stay upright.

"Now push off a little bit and get your balance by turning whichever way you start to lean," McLucas directs the students. "Just follow the bike wherever it wants to go!"

With their feet dragging, the students slowly start to roll.

"Turn! Yeah, turn! Any which way! As long as you don't run into someone," she calls out, just before a near miss.

Transported Back To Second Grade

Like a bunch of drunken sailors, the students bob, wobble and weave across the pavement. Moris starts to gain a little speed, and McLucas shouts after her: "Not too fast! Ready with the brakes!"

"I forgot I had brakes," Moris responds.

It doesn't take long before the class divides into the high achievers — and the rest.

While some, like Moris, struggle to get their balance, others have already put their pedals on, and are riding for real.

"Beautiful," McLucas calls out to Choquette. "You're a natural!"

Another student is riding one-handed, and another is standing up. Watching the superstars' successes seems to transport some of the other students straight back to the insecurities of second grade.

"Is it normal to be standing up in the first class?" Marin asks McLucas.

"What is the average time it takes for people to start pedaling?" Moris asks. "Is it the second class?"

McLucas becomes as much therapist as teacher

"Everyone goes at their own pace," she says. "No negative thinking here; you can do it!"

"Yeah, I can do it," Moris replies, as if trying to convince herself as well.

"I just have to get my head back in it. I can do it," she says, and heads off to the side so she can practice on her own, away from the crowd.

Just a few minutes later, her focus is beginning to pay off.

"The fear factor is lessening," she says.

McLucas comes by to check on her just as it seems to finally click.

"Now I know why people ride bikes," she says. "It's almost like you're flying."

By the end of her first day of bike riding school, she has already learned some huge lessons.

"When I started to look at what other people were doing, that's when I got rattled," she says. "When I focused on myself, looking straight ahead, [I was] able to succeed."

It's just like in life, she says: "When you're too concerned about other people, you get off balance."

It's one small ride for Moris, and one giant leap for these grown-ups.