Accessibility links
Summer Song Favorites: Paul Simon's 'Kodachrome' Last inning. Bases loaded. Down by two. For songwriter Maia Sharp, Paul Simon's jaunty tune instantly recalls one childhood summer when she stepped to the plate in a baseball game — as the only girl on the team — and came through in the clutch. 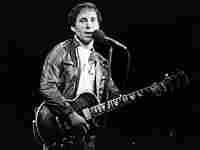 Maia Sharp discusses her own music with host Melissa Block: 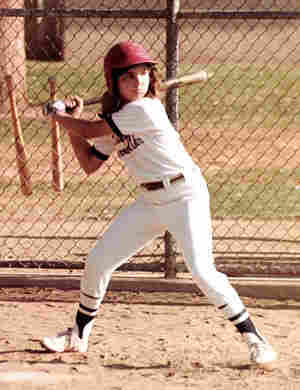 Maia Sharp steps up to bat at age 11 in 1982. Sharon Bays hide caption

Los Angeles-based songwriter Maia Sharp may be "set to arrive" now as a musician. But during one childhood summer — back when she dreamed of being the first woman in Major League Baseball — an incident on a baseball diamond made her think she had already made it.

"I was a total jock," Sharp says. "I was usually the only girl on the team — in fact, I think there were only two girls in our entire league."

For the next in a series highlighting quintessentially "summer" songs, host Melissa Block spoke to Sharp about the good memories associated with Paul Simon's "Kodachrome." Sharp's story began with a classic situation: last inning, bases loaded, down by two. That's when Sharp came up to bat.

"And I know that there were fathers in the stands that were like, 'Oh, God, here we go, we've lost,' " Sharp says. "And I creamed it over the left fielder's head. It was such a glorious moment."

"And I'm sure it was helped by the fact that he had moved up because the girl was up," she says. "I love it. Move up all the way to the dirt line if you want to here, buddy."

On the celebratory run for shakes and fries, the mix tape in the car led off with "Kodachrome." It has been a good association ever since.

"Triumph — you know, the coming through in the clutch, the celebration, the kind of, 'I showed them,' " Sharp says. "Yeah, all of it. It's amazing what a song can do. It's like a smell — it brings back everything."

As for Sharp's baseball ambitions?

"It might be out of reach at this point," she says.