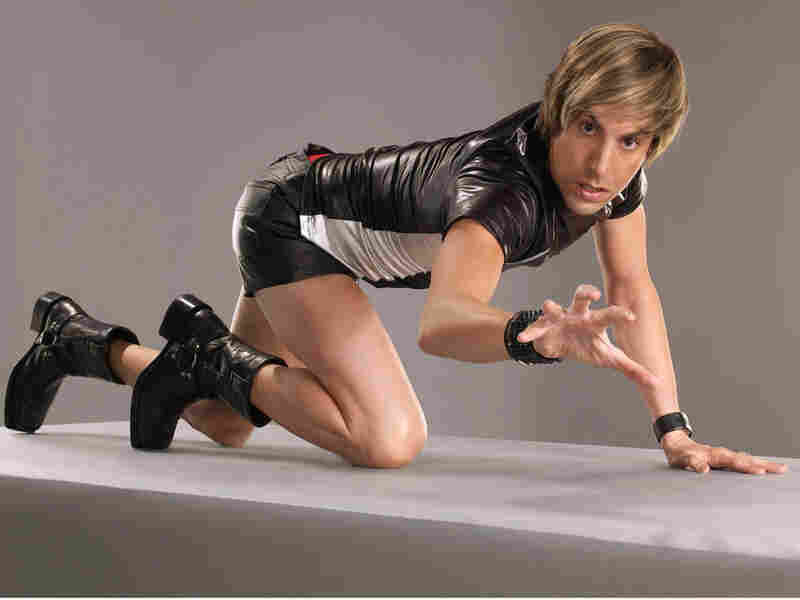 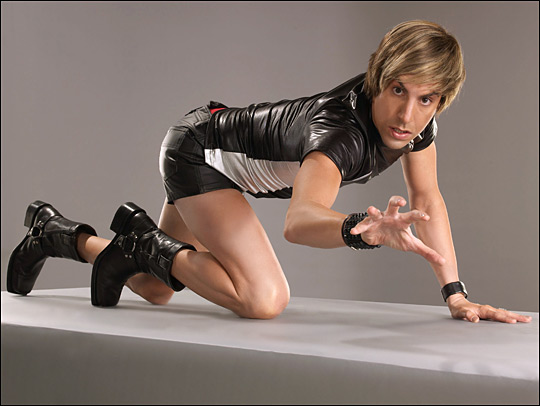 Sacha Baron Cohen's near-suicidal antics as Bruno — this is a guy who'll flirt with gun-toting hunters — expose the underlying discomfort his straight dupes feel when confronted with unapologetic flamboyance.

To say that Sacha Baron Cohen's Bruno is a queeny stereotype is like saying water is wet. He's a geyser of swishiness. And Baron Cohen is a big guy, with long arms and legs and a wiggly little butt: When he sashays forth in a pink jumpsuit or short-shorts, he's an amazing spectacle.

Bruno is also childishly oblivious — a boob — and he parades himself before people who are not accustomed to someone so out there, which is to say most people. For Baron Cohen, the whole world is stooges — only his audience is in on the joke. We laugh at his marks, never with them.

At his best, Baron Cohen is a comic guerilla in the front lines of the war against prejudice and sanctimony. What's open to debate is whether he's also a comic gorilla — a King Kong mauler of innocent bystanders, a cheap-shot artist.

Well, he's both, which is why I hated Borat and why I'm surprised to say how much I laughed at Bruno. If Baron Cohen and director Larry Charles' latest provocation seems less sadistic than Borat, maybe it's because flaunting one's gayness in the face of potentially violent homophobes is not just aggressive, it's borderline suicidal. I mean, Bruno puts moves on hunters with guns.

The film centers on a doomed quest: After being "schwarz-listed" in the fashion industry, the Austrian model and exhibitionist flies to Hollywood, determined to become a celebrity.

He auditions for appalled directors, draws egregious attention to himself as an extra, and shoots a pilot for a talk show interspersed with semi-pornographic bumping. The camera rests on the faces of the men and women in the focus group as they struggle to keep their revulsion in check.

To get the most out of Bruno, you have to suspend disbelief and regard the movie as a hard-R-rated Candid Camera, to accept that, unlike Eminem, who was in on the set-up at the recent MTV awards, the celebrities and ordinary people whom Baron Cohen pranks are driven to actual sputtering rages. Take the largely African-American audience of The Richard Bey Show when guest Bruno trots out his adopted African baby, obtained in a swap: one little boy for one limited-edition U2 iPod.

The crowd doesn't exactly love it.

Here's the question: Is there a larger satirical point, or is Bruno only about pushing buttons? Consider the thrust of that talk show scene. Through ludicrous exaggeration, Baron Cohen is implicitly making fun of hate speech about gay adoption: that children will be ushered into lives of debauchery by perverts promoting an alternate "lifestyle." I think that's worthy of ridicule, and the scene is a hoot.

But the "O.J." line suggests he can't resist the odd gratuitous flourish — which is also a hoot but, yes, only button-pushing.

I watched much of Bruno through my fingers, squirming — especially when Bruno tries to manipulate former Republican presidential candidate Ron Paul into making a sex tape.

Nearly as excruciating are his earnest queries to a former homosexual who now works for a church that aims to deprogram gays. See Bruno ingenuously inquire how not to be disgusted touching female bodies — and see the deprogrammer patiently say words to the effect that you just have to take one for God's team.

A detour to the Middle East is off-topic, but what daredevil from MTV's Jackass ever had the chutzpah to stride through an Israeli Orthodox neighborhood in a black hat, pais, and short-shorts?

Underlying all these gags — profound and cheap — is a hard truth: Many heteros are still uncomfortable with flamboyant gay behavior. When the arty, painfully discreet Brokeback Mountain came out, some conservative commentators announced they couldn't bear to watch such ickiness onscreen.

To them — and to everyone who'll see Bruno because it's the new gross-out sensation — Sacha Baron Cohen is mischievously moving the boundary posts, proclaiming, "In your face!"