Accessibility links
Barrymore Enters "The Monastery Of Edie" Drew Barrymore took on the role of "Little Edie" Beale in HBO's April 2009 dramatization of the 1975 documentary Grey Gardens. Practically born to the stage herself, Barrymore plays a woman pining for the spotlight. The movie is out on DVD July 14. 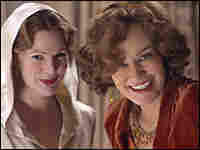 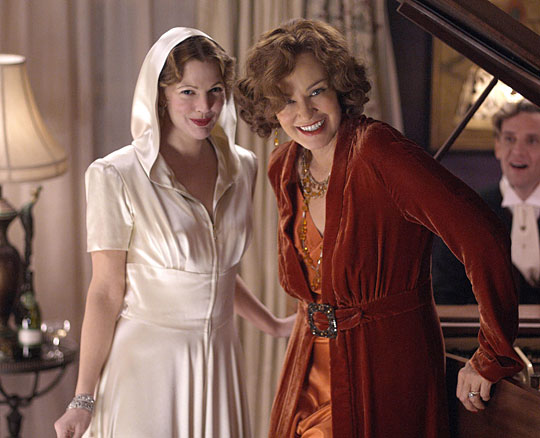 Actress Drew Barrymore has been in front of the camera since she was barely a year old. For an HBO movie, she took on the role of legendary eccentric "Little Edie" Beale — a woman who spent much of her life wishing for stardom, and who was finally immortalized in the Maysles Brothers documentary Grey Gardens.

HBO's new dramatization — based on the 1975 original, and due out on DVD July 14 — co-stars Jessica Lange as Edith Ewing Bouvier Beale. "Big Edie," as she was known, was the aunt of Jacqueline Bouvier, who went on to marry a Kennedy, and then an Onassis. "Little Edie" was Jackie's cousin and sometime rival.

After their fortunes flagged — a divorce for Big Edie, an halting quest for fame as a model for Little Edie — the two women secluded themselves in Big Edie's East Hampton house, a dilapidated mansion called Grey Gardens.

Barrymore tells Fresh Air's Terry Gross that she prepared long and hard for the role. She was retrained to speak with fake teeth and a nasally theatrical accent; she studied Little Edie's curriculum from every school she attended; she read all of Little Edie's journals, learning (among other things) that "her hair loss was something that really ate her alive."

Barrymore withdrew from society completely to further understand Little Edie's hermit-like existence. She stopped reading, stopped driving, and stopped speaking to friends and family — all because she wanted to enter the "monastery of Edie."

"I really wanted to understand what it was like to lose everything and be isolated, be on that island," Barrymore says. "And it was one of the most painful experiences of my life."

The Beales' story gained attention when health inspectors raided Grey Gardens, finding a long list of health and building code violations. It burst into the public consciousness again with the Maysles Brothers' film, at which point Jackie Kennedy Onassis stepped in to fund the repairs.

Barrymore appeared in Steven Spielberg's 1982 blockbuster E.T. when she was 7 years old. After a troubled adolescence, the actress went on to appear in many films including The Wedding Singer, Charlie's Angels, Donnie Darko and 50 First Dates.

She makes her directorial debut later this year with Whip It!, a coming-of-age comedy based on the Shauna Cross novel Derby Girl.