Accessibility links
Bleak Economy Squeezes Community Colleges The depressed economy has students lined up to enroll at community colleges. At any other time, surging enrollment would be seen as a boon, but the spike comes as state and local governments are cutting financial support for the schools. 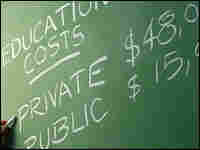 One of the pressures on community colleges is that some students are choosing them over higher-priced institutions. iStockphoto.com hide caption 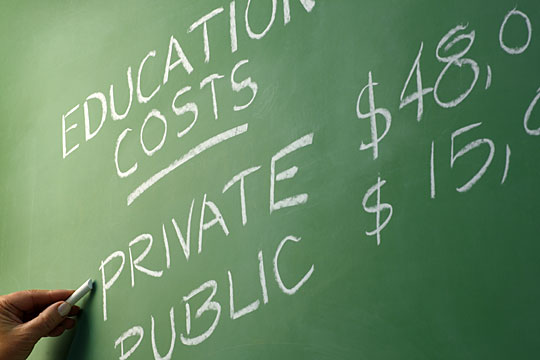 One of the pressures on community colleges is that some students are choosing them over higher-priced institutions.

The fall session is still weeks away, but you wouldn't know it from the recent activity at the registration and admissions office on the campus of Miami Dade College.

By 7 a.m. — an hour before opening — students are lined up waiting to enroll and to sign up for classes. Administrators say there are more students looking to attend this fall than they've ever seen before.

In large part, it's because of the economy.

Many who are out of work are seeking to improve their education so they can get better jobs. There are also students who, in better times, may have gone to college at higher-priced institutions.

"The reason I'm registering [at Miami Dade] is because there's no money, you know?" says Julio Torton, an incoming freshman who was accepted at the University of Miami, where tuition and fees are more than $42,000 a year. "I mean, I just registered right now. Hopefully, I'll get the classes I want. I registered for the fall term, so we'll see how it goes. But I've noticed that the line is getting bigger and bigger every day."

The bottom line: Tuition and fees at Miami Dade total just over $1,000 per term for Florida residents.

Across the country, educators at community colleges say they've often seen enrollments surge in times of economic slowdown. The size of this spike, however, is unprecedented, and it comes at a time when budgets are severely limited.

"As it stands right now, we have almost 39,000 students registered for the fall term, and we began fall registration only two weeks ago," says Dulce Beltran, registrar at Miami Dade College. "And a quarter of the courses are already closed with almost two months to go before fall term begins."

Enrollment is running nearly 60 percent ahead of last year's pace. Miami Dade has scrambled to hire instructors and add courses. At the same time, administrators have cut costs elsewhere and increased class sizes.

With 80,000 students receiving college credit, Miami Dade is the nation's largest community college, so the numbers here are extreme. But across the country, it's a rare institution that isn't in a similar situation.

At Broward College, near Fort Lauderdale, administrators say they can't add enough freshman introductory courses to meet demand. Second-year student Wally Honoret says it's also hard to get a place in lab courses, such as the anatomy class he's taking for his physical therapy degree.

He says he was 10 minutes early to his anatomy class on the first day, and it was already full. "I was like, 'Man, what's going on?' It's real competitive to just get a seat now."

At another time, surging enrollment might be seen as a boon. This spike comes, however, as state and local governments are steadily cutting their financial support for community colleges.

A decade ago in Florida, the state Legislature provided more than three-quarters of the operating budgets at community colleges. That figure has now dropped to about 50 percent, and Broward College President David Armstrong says even that support is shaky.

"In the last three years, our state support has declined 22 percent, about $18 million," he says.

To help make up the gap, Broward College raised tuition this year by 8 percent. Armstrong says he's hopeful that, as the economy improves, Florida will restore the funding it has cut.

"We'll have years to climb back out of this hole that has been dug in the budget, though. And the state is facing many other issues that compete with our needs in community colleges: universities, K-12, there's health issues, prisons and all the other things the state has to budget," he says.

It's a similar story in California, Arizona and, according to Norma Kent of the American Association of Community Colleges, at almost every one of her group's 1,200 member schools.

"The state of Washington, for example, has experienced the highest budget cut for the community colleges that they've ever had," she says. "The state of California is in very dire straits that you hear about every day. And they've projected that they may turn away as many as 200,000 students this year."

Making matters worse in Florida is that, because of budget cuts, the state's 11 public universities have imposed caps on freshman enrollment.

That's not possible at community colleges, where an "open-door policy" allows admission of anyone with a high school diploma or GED.

In Florida, California and many other states, that open-door policy is now taking a beating as thousands of students are being shut out of classes — and potentially careers.