Accessibility links
This Ain't Your Mama's Revolution: Or Is It? When protests broke out after the presidential election in Iran, the world marveled at how many women were at the forefront of the vociferous demonstrations. Iranian-born commentator Melody Moezzi says Westerners too often think of the hijab-wearing women of the Middle East as hopelessly oppressed and timid. Moezzi wasn't at all surprised to see female protesters.

This Ain't Your Mama's Revolution: Or Is It?

This Ain't Your Mama's Revolution: Or Is It? 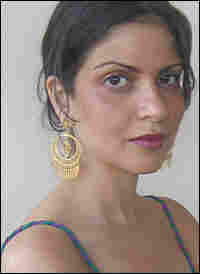 Melody Moezzi is an Iranian-American attorney and the author of War on Error: Real Stories of American Muslims. Courtesy of Melody Moezzi hide caption

It has been reported to death since last month's Iranian presidential election: Young Iranian women are at the forefront of the opposition movement, maybe even at the forefront of the next revolution. What hasn't been effectively reported, however, is the fact that this isn't some new, mysterious phenomenon. As an Iranian woman, I can assure you, we weren't just drinking tea and doing our makeup in the lead-up to all of this.

Women have been fighting for equal rights in Iran for years. Even during the Islamic revolution, women helped lead the struggle against imperialism, for a free and independent nation. They also made huge strides in improving reproductive rights by getting the government to subsidize birth control (hence the acute drop in birthrates after the revolution), and they began entering the work force and universities in ever-increasing numbers.

Still, under the current regime, women have yet to achieve basic human rights, especially when it comes to inheritance and criminal law. While it would be wrong to claim that there have been no advancements in women's rights since the revolution, it would be equally wrong to exaggerate them. Despite some obvious areas of progress, particularly with respect to education, one thing hasn't changed for women since the 1970s, and the evidence of this stagnation isn't hard to spot.

There are countless examples of brave Iranian women who have paved and continue to pave the way. Some of these women, like Shirin Ebadi (a mother of two, an attorney and the winner of the 2003 Nobel Peace Prize for her work on women's and children's rights in Iran), have received well-deserved public praise for their courage. Most of these women, however, have gone unnoted in the history books. Still, their struggles are no less real or honorable for lack of public recognition.

Nothing has struck me quite as deeply, since the current unrest began in Iran, as the images of elderly women being beaten by the Basij militia in the streets of Shiraz. Watching these images on television, I knew that nothing in my homeland would ever be the same, and I thanked God and my grandmother for it.

While it may appear that young Iranian women are at the head of this struggle, their grandmothers are at its roots. And it is these roots that allow them to stand strong and continue to fight even in the face of the harshest conditions, and even when it seems like no one is watching. While these roots may appear modest at first glance, they are, in fact, legion.

Though maybe not to the rest of the world, in her corner of Tehran, Mamaan Kuchooloo was a kind of local celebrity. Everyone called her that, too: Mamaan Kuchooloo — a play on the Persian word for grandmother, mamaan bozorg, meaning big mother. Mamaan Kuchooloo, however, means little mother. At her tallest, she stood no more than 5 feet, but her presence was immeasurable.

Almost daily, for over 40 years, people showed up at Mamaan Kuchooloo's doorstep with their problems. A misbehaving child, a lost job, a failing marriage, an unjust prison sentence, a death in the family. These were her specialties. More often than not, she would fix the children, find the job, patch up the marriage that warranted it, argue with bureaucrats to get her way and bring fresh dates to funerals.

And this wasn't her only profession. She was also a mother to seven children. When my mom was only 7, her father died, and Mamaan Kuchooloo was left to raise all of the children alone. This woman was a force.

I never saw her cry or even wince. She would kill a cockroach the size of a shoe as if it were a gnat. She would tell off a gossip, a bigot or a swindler immediately upon discovery, and she would do so loudly and in public whenever possible. She would leave the house without hijab and tell the police officers who stopped her that she was too old to be sexy and, therefore, above their silly impositions of "modesty."

No one could tell Mamaan Kuchooloo what to do. She never sought popularity or esteem, yet they seemed to follow her everywhere. There's something about speaking up when others are too weak, afraid or self-conscious that people admire. And once one person does so, it becomes contagious.

That kind of defiance is now spreading like wildfire in Iran, and it neither starts nor ends with the younger generation. Young Iranian women may be over 35 percent of the current population, but we are 100 percent our mothers' daughters.

Mamaan Kuchooloo would be proud of the intrepid young women fighting in the streets of Iran today, and I have no doubt that were she alive, she too would be right there on the front lines with them. As contemporary Iranian women, we have an unlimited arsenal of weapons at our disposal: our feet, our minds, our souls and our laptops. But our most powerful weapon is not borne of youth or bravery, but, rather, of blood.