Accessibility links
Stress, Anxiety May Keep Women Smoking Women may have a harder time kicking their smoking habit than men do. Researchers say women are more likely to get stressed and reach for a cigarette when trying to quit, meaning it takes them more tries to stop for good. 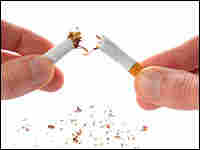 Researchers say women may have a harder time kicking the habit than men. iStockphoto.com hide caption 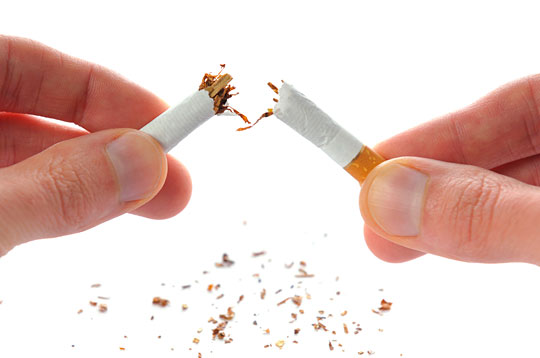 Researchers say women may have a harder time kicking the habit than men. 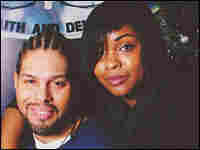 Tonya Guess, with her husband, Andrae Boone, says she wants to quit smoking for her 3-year-old daughter. Courtesy of the Guess family hide caption

Quitting cigarettes is not easy for anyone. But some studies show that women have a harder time keeping their no-smoking vows than men. Researchers don't know exactly why this may be the case, but they speculate that women are more sensitive than men to sudden emotional upset.

University of Pittsburgh psychologist Saul Shiffman says acute emotion — getting upset suddenly — can have a "big role" in getting women to pick up a cigarette.

"Relapse is the whole game," says Shiffman, who notes that among men and women who quit smoking without any treatment like nicotine replacement, about three-fourths return to smoking within just one week. "So, essentially the key to quitting is avoiding relapse," he says.

Shiffman says relapse starts with a single lapse — for example, smoking a cigarette during a period of not smoking, thinking that the return to smoking is temporary. Shiffman says people tend to have lapses when they're emotionally upset. He also says this seems to occur more frequently with women.

While data from federal household surveys show that men and women have approximately equal success in ultimately quitting smoking, mounting evidence indicates that women have a harder time when they actually try to quit.

Shiffman recently analyzed 12 clinical trials involving more than 4,400 individuals who were trying to quit smoking. Overall, he says, women had a 25 percent lower success rate on any given attempt to quit than men did.

Shiffman suggests the discrepancy in federal "ex-smoker" statistics and the studies he examined may simply reflect that women try harder to quit and more often than men, which ultimately accounts for an overall success rate that looks about the same for men and women.

Chesapeake, Va., resident Tonya Guess says she has "a thousand reasons" to quit smoking. No. 1 is her 3-year-old daughter; Guess doesn't want her daughter to think smoking is "normal." "I want her to go 'yuck' when she smells cigarette smoke, says Guess. No. 2 is her health; Guess says she wants to live a long life and see her daughter grow up and get married. No. 3, she says, is her belief in God; she feels that she betrays God every time she reaches for a cigarette.

At this writing, Guess is on her sixth day without cigarettes, but she worries this attempt will end in failure. "I've tried to quit thousands of times, over and over again," she says, adding that she's tried the nicotine patch, the gum — just about "everything you can think of; it all works for about a week or two." And then, she says, something happens that makes her want a cigarette, no matter what.

"I'm hit with an emotion so intense that I don't think twice about it. Next thing you know, I'm back on cigarettes again," she says. And when that urgent craving hits, says Guess, "you don't think about your health or your child, you just think about that one cigarette; just one and I'll be fine again."

Carolyn Mazure, a professor of psychology at Yale School of Medicine, is an expert on depression and addictive behaviors, and is principal investigator for the Sex-Specific Factors Core of the NIH-funded Transdisciplinary Tobacco Use Research Center at Yale, which was created to help people quit smoking.

She says cigarettes fill many roles for women who smoke. "Women often report smoking is helpful in reducing negative mood, even enhancing positive mood, managing the stress of daily life and also managing appetite and weight gain," says Mazure. "Women are looking to cigarettes to help them with those different situations, and as a consequence, it's often more difficult for women [than for men] to give up their cigarettes."

Mazure adds that depression and negative moods are more common among women than men. She says her research has shown that women are more "vulnerable to the negative effects of stress and are more likely to relapse back to smoking in the face of stressors" than men. "Women also believe that smoking will help them control their weight," she says.

Psychologists Mazure and Sherry McKee, both with Yale University, are involved in various studies looking at whether medications and therapy can help, particularly since women don't do as well as men when it comes to the popular first-line treatment for smoking cessation: nicotine replacement, like patches or gum.

With colleagues at Women's Health Research at Yale, they're now investigating whether certain medications can help women better resist cigarettes.

McKee directs the Yale Behavioral Pharmacology Laboratory and is an expert on behavioral factors related to tobacco addiction. Specifically, McKee is looking at whether medications can help ease anxiety and therefore reduce the urge to smoke. In one study, men and women either receive an active medication to reduce anxiety, or a placebo.

Other studies are looking at various types of medication, including drugs that suppress appetite, to see what might help women resist smoking.

McKee says researchers are also investigating whether certain talk therapies can help women. The therapies help people figure out how to cope when faced with a stressful situation in ways other than grabbing a cigarette.

Such therapy helps people understand that they can engage in activities other than smoking to improve mood, says McKee, "like exercise, reaching out and getting support from somebody, or engaging in a distracting activity like going for a walk." McKee hopes to have some answers both about medication and behavioral therapy within the next few years.

Shiffman's Data On Addiction Gender Differences
Smokefree.Gov Tips For Women On Stress And Smoking
Centers For Disease Control: Smoking And Tobacco Use