Accessibility links
A Culinary Comeback For The Lowly Sardine? Remember those little fish sleeping in a tin in your grandmother's pantry? In Monterey, Calif., fans of the sardine are hoping it can make a big splash, especially as concerns grow about overfishing of tuna, salmon and shrimp. 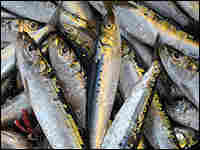 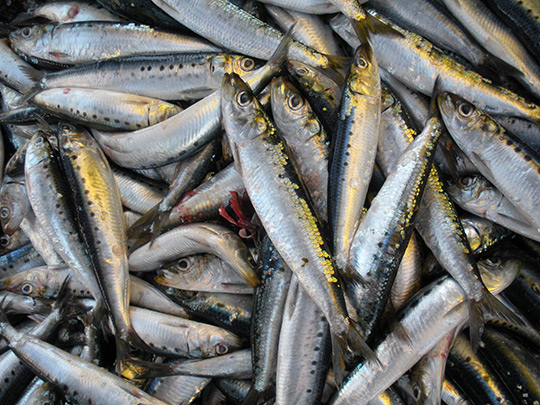 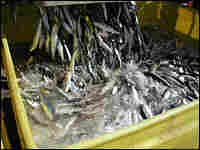 Sardines are loaded into containers at a dock in Moss Landing, just north of Monterey, Calif. Each fish weighs about four ounces; this load totaled about 40 tons. David Gorn for NPR hide caption 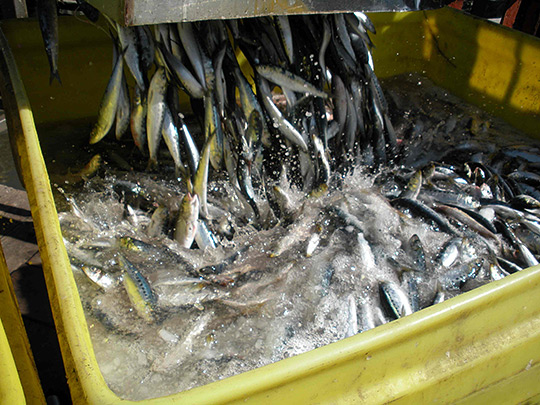 Sardines are loaded into containers at a dock in Moss Landing, just north of Monterey, Calif. Each fish weighs about four ounces; this load totaled about 40 tons.

Remember those little fish sleeping in a tin in your grandmother's pantry? In Monterey, Calif., fans of the sardine are hoping it can make a big splash.

"My compadres in the Sardinista clan here, we believe that the ocean needs a lot of help," Mark Shelley says as he looks out over the water of Monterey Bay. One way to help, he says, is to get you to eat less tuna and more sardines.

Shelley's "Sardinistas" are a sardine-loving group that might be best described as green foodies.

Americans love to eat their tuna, salmon and shrimp — the big three of the seafood industry. But their popularity could also be their undoing, and overfishing is becoming a larger concern. So consumers are being urged to try alternatives: fish like tilapia, barramundi — and the lowly sardine.

And sardines are cool, he says, because they're packed with protein and vitamin D and lots of omega-3 fatty acids. And "since they're low on the food chain, they don't have the organic toxins and heavy metals, like mercury, as the higher food-chain fish."

Sardines used to be big business in Monterey; they gave birth to Cannery Row. But the overfished sardine industry crashed in the mid-1950s. Now, a half-century later, the Pacific sardine population has recovered.

So this loose-knit band of Sardinistas is seizing the opportunity and planning to market a replacement for cans of tuna: cans of sardine meat, minus the bones and head. If they succeed, you'll soon be able to whip up a sardine sandwich or a sardine salad. The group is also working to get local chefs to put fresh sardines on the menu.

Restaurant owner Domenic Mercurio grew up eating fresh sardines. At Cafe Fina on Cannery Row, he puts a little salt, pepper and cumin on the fish, grills them and then takes them out to the front of his restaurant.

"Want to try fresh local sardines?" he tempts tourists passing by. "You got to try a sardine."

This is the tricky part, Mercurio says — getting people on the wharf to try one. "You ladies like fresh sardines?"

"No!" laugh Eliza Devine and Teresa Margiatta, visiting from Las Vegas. But Mercurio charms them into a sample.

Devine looks like she'd rather eat a snail. "I've had them out of a can, as a child," she says. The flavor of Mercurio's sardines, however, brings her around. "They're good. They're like little fish. I thought they were going to taste saltier, and slimier, less like a whole piece of fish."

Mercurio says once people try sardines, they're hooked. And right now is one of the few times you can get fresh sardines. The sardine season started at the beginning of July. The quota restrictions on sardines are now tight, so the window for fresh sardines won't be open much longer.

Just north of Monterey, the dock is bustling at Moss Landing. In one load, there are about 40 tons of sardines, sucked out of the boat hold by a giant vacuum and then spit out into big plastic containers on the dock. About 90 percent of these sardines are headed to Australia — ironically, to be used as fish meal at tuna farms.

Head and gut fresh sardines. Rinse well and dry. Sprinkle with salt, pepper and cumin. Over a nice hot fire, grill untill done, about 4 or 5 minutes each side.

Barbecue a few green onions for 1 minute. Serve sardines with fresh lemon and green onion. That's old-school grilled sardines. If you'd like to try a different flavor, grill the sardines and serve with a tomato relish:

Mix all ingredients. Pull the bones out of the sardines (should be easy once they've been cooked), put a little relish on them, and you have a perfect summer appetizer.