Accessibility links
Calle 13 Invites Fans To Embrace The Ugly Calle 13 is one of the most popular hip-hop groups to come out of Puerto Rico. The duo has gained the love of its countrymen and the attention of fans all over the world by using its music to talk honestly about the lives of Puerto Ricans. 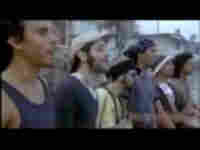 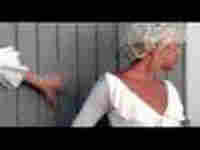 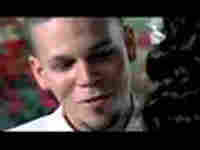 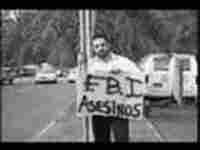 Advisory: Explicit language and subject matter not suitable for all ages.

One of the most popular Latin bands in the world is performing a free concert Saturday in New York's Central Park. Calle 13 is a hip-hop duo that sprang onto the music scene in 2004. The pair have won multiple Grammy awards and consistently stayed at the top of Latin music charts, in large part because of the unique way they blend hip-hop and reggaeton with many different Latin American rhythms and sounds. 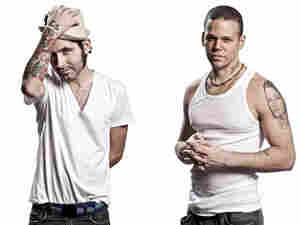 Residente and his brother Visitante, the two members of Calle 13, grew up in a middle-class neighborhood in San Juan, Puerto Rico. Courtesy of the artist hide caption

The Sounds Of La Perla

"La Perla is a barrio that is protecting Old San Juan," says Rene Perez, or "Residente," who makes up half of Calle 13. La Perla is the subject of the duo's latest song, a collaboration with salsa legend Ruben Blades.

The song describes the slum, with its hundreds of colorful makeshift houses stacked together, one on top of the other. It's mostly known for being a drug-dealing haven, and for being a place where murder is almost an everyday occurrence.

"You can see it both ways," Perez says. "You can see it like society put out La Perla -- literally, they are outside the wall, but also you can see La Perla as a barrio that protects Old San Juan."

The neighborhood also has a jaw-dropping view of the beach, making it the perfect setting for a video shoot, but it's not easy for a stranger to stop by. La Perla is completely governed by the drug dealers, and is off-limits to almost all outsiders, even the police. Even with a guide, reporters have to follow strict rules and ask permission to take pictures and interview the residents. Many of them love Calle 13.

"They hang out with us like we were family," said Sonia Miruet, a resident of La Perla. "I really like Calle 13's songs because the messages in their songs are things that are really happening and things that people are living."

Class Consciousness At The Fore

Residente and his brother Visitante, the two halves of Calle 13, didn't grow up in a barrio like La Perla. They grew up in a middle-class neighborhood in San Juan. But the group is very class-conscious. Ed Morales, author of The Latin Beat: The Rhythms and Roots of Latin Music, from Bossa Nova to Salsa and Beyond, points to Calle 13's hit "Atrevete" -- or "I dare you" -- as an example.

"One of the more famous lines is that 'it doesn't matter if you like Coldplay,' which is kind of a joke about the identity politics in Puerto Rico, where someone who aspires to be more middle class might say that they just listen to rock groups and go to the mall and go shopping," Morales says. "So he's asking the girl in the song to let go of your middle-class pretense."

"Atrevete" was Calle 13's first hit, and it made Residente and Visitante superstars. Both are in their early 30s. Residente has a master's in art from the Savannah College of Art and Design, and Visitante studied music at the University of Puerto Rico; Residente raps, while Visitante makes the music. He uses rhythms that are seldom heard in Latin hip-hop, like cumbia, rock and funk. For "La Perla," he imitates a Brazilian bass drum and borrows a salsa beat from their collaborator, Blades.

"I mixed it with the samba rhythms and candombe rhythm of Uruguay -- so it's old school and folkloric," Visitante says. "Also, the bass isn't doing the bass. The bass is another instrument, the surdo, which is a percussion instrument."

Calle 13's success has put the brothers in rare company. Residente is dating Denise Quinones, Puerto Rico's former Miss Universe, a fact that upset many Puerto Ricans, especially her parents. Residente taunts them in "Tango del Pecado," or "The Tango of Sin," rapping that he's going to date her regardless of what they think.

Residente says the song is dedicated to everyone who criticized the relationship. But Morales explains that it isn't just about that.

"It's a calling out of the morality of Latin America," he says. "It's just an invitation to turn everything upside-down by embracing the ugly and profane in life and, you know, asking people to go on that journey."

Many of Calle 13's songs are hyper-charged with political messages and highly critical of the U.S. government. "Querido FBI," or "Dear FBI," is a raw rant against the bureau for its 2004 killing of 72-year-old Puerto Rican independence leader Filiberto Ojeda Rios. He was considered a terrorist by the U.S. government for his advocacy of violence, but he still had a strong following among many Puerto Ricans. The song calls for them to fight for their independence, and it calls out the barrios for not reacting more forcefully to Rios' killing.

Residente's challenge worked, if only for a while.

"I was angry. I just thought of el barrio, you know, they have everything to defend themselves. More than the army," he says. "Then they forget. That happens all the time here. They forget about things."

Many in Puerto Rico may have forgotten, but the video is still watched on YouTube, with more than a half-million views so far.

Calle 13 is set to release a documentary about its travels through Latin America, and the brothers are quietly working toward a transition to making music in English. All of this success has come, Residente says, without much help from the radio.

"Ruben Blades told me once ... 'If your music is very hot on the radio, you have to be worried, because you're doing something wrong,'" Residente says.

When it comes to music, Calle 13 seems to be doing everything right.