Accessibility links
United Passenger Sets Complaint To Music Musician Dave Carroll's $3,500 guitar was damaged by United Airlines baggage handlers. He complained to the airline, but got nowhere so he decided to write a song about it. His song, "United Breaks Guitars," went viral on YouTube.

Musician Dave Carroll's $3,500 guitar was damaged by United Airlines baggage handlers. He complained to the airline, but got nowhere so he decided to write a song about it. His song, "United Breaks Guitars," went viral on YouTube. 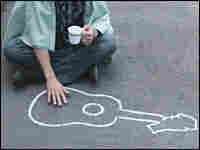 Like Bruce Jacob, Dave Carroll also had a problem with a guitar last year, a very different problem. And since Dave Carroll is a songwriter and not an electrical engineer, his invention was a song and a video on YouTube.

Mr. DAVE CARROLL (Singer): (Singing) I flew United Airlines on my way to Nebraska, the plane departed, Halifax, connecting in Chicago's O'Hare. While on the ground, a passenger said from the seat behind me, my God, they're throwing guitars out there.

SIEGEL: That's right. The United baggage handlers were manhandling his $3,500 instrument. It was a smashing performance, literally. By the time Dave Carroll was reunited with his guitar, it had a broken neck. He complained to the airline, but got no joy.

Mr. CARROLL: (Singing) So began a year-long saga of pass the buck, don't ask me, and I'm sorry, sir, your claim can go nowhere.

SIEGEL: That's when Carroll put his customer complaint to music. His song "United Breaks Guitars" went viral on YouTube. And now a United spokesperson says the airline has contacted him about the guitar and should have done so a lot sooner. United also says it would like to use his video for training purposes to ensure that all United customers receive better service and that the video struck a chord with the airline.