President Barack Obama arrives in Ghana on Friday for his first visit to sub-Saharan Africa since taking office.

In Ghana, there have been elaborate preparations for the president's visit. It is Mr. Obama's first trip to Sub-Saharan Africa since taking office. Tomorrow, he'll confer with the Ghanaian president and visit Cape Coast Castle, that's a notorious site where slaves were imprisoned before being shipped across the Atlantic.

As NPR's Ofeibea Quist-Arcton reports, it would be an understatement to say that Ghanaians are excited about hosting the Obamas.

OFEIBEA QUIST-ARCTON: Ghanaian singer Blakk Rasta composed this song for the then-candidate Barack Obama. It became a huge hit all over the airways in Ghana during President Obama's inauguration.

TV, radio, newspapers, businesses, you name it. Everyone in Accra appears to be proud that President Obama has chosen Ghana. And out of sheer admiration, Nancy Sam said she set up an association, Friends for Obama, last year, when he was a senator trying to become president.

QUIST-ARCTON: Dr. Robert Lee(ph) is an 89-year-old U.S. war vet. Born in South Carolina, he trained as a dentist and met some of Ghana's future independence leaders at Lincoln University. Those encounters lit a fire in Dr. Lee, with his rich baritone voice, and he moved to Ghana in the 1950s. He's been here ever since. Lee says he's thrilled at what many African Americans who settled in Ghana are calling a homecoming for President Obama.

Dr. ROBERT LEE: This fellow also shows that being black doesn't have much to do with what you become. Because Africans in the past, in America and in Africa, always felt that they could never do these things. These were reserved for white people. But Obama has proved this is not true.

QUIST-ARCTON: So, what song would you sing for President Barack Obama?

Dr. LEE: He would probably want to sing that…

(Singing) God bless America, land that I love, and beside her, and guide her.

Dr. LEE: (Singing) On the mountains, through the prairie, through the oceans white with foam. God bless America, my home, sweet home.

QUIST-ARCTON: I've come to Mary Mother of Good Counsel School, and they look as if they're having sports day today. But I want to know what they feel about the Obamas' visit here to Ghana.

Ms. STEPHANIE AFAKUMA-AFQUA(ph): My name is Stephanie Afakuma-Afqua. I'm 12 years. And I'm so happy because Obama has encouraged all Ghanaians and all Africans to go ahead with your dreams. And I'm so glad he's coming to Ghana. And they should keep on doing what they are doing. We love you, Obama, and everyone.

Motorists in Accra, the capital of the West African nation of Ghana, drive past a billboard welcoming U.S. President Obama on Thursday. Obama's visit will be his first trip to sub-Saharan Africa as president of the United States. Jane Hahn/Corbis hide caption 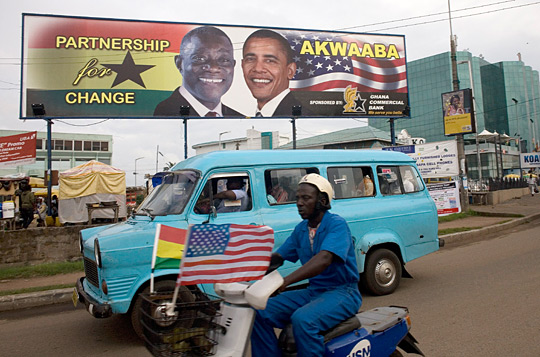 Motorists in Accra, the capital of the West African nation of Ghana, drive past a billboard welcoming U.S. President Obama on Thursday. Obama's visit will be his first trip to sub-Saharan Africa as president of the United States. 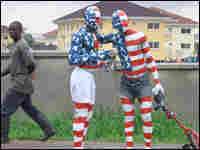 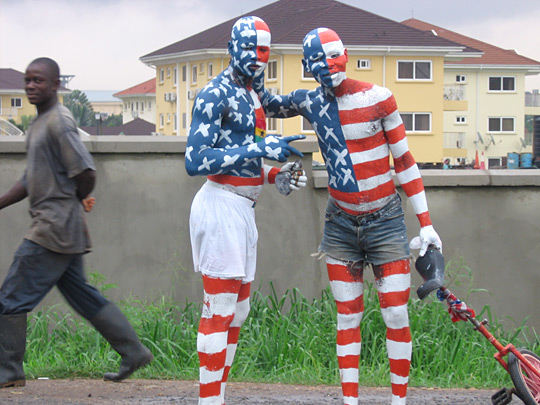 President Obama's trip to Ghana, which begins Friday, is being heralded as a landmark for the West African nation and trusted ally of Washington.

The 24-hour visit by the Obamas is their only stop on the continent.

In an interview with allAfrica.com, Obama explained why he picked Ghana.

"Part of it is lifting up successful models. And so, by traveling to Ghana, we hope to highlight the effective governance that they have in place," he said. "I think that there is a direct correlation between governance and prosperity."

After hosting President Clinton and President Bush in recent years, Ghanaians are excitedly awaiting the arrival of Barack and Michelle Obama.

Obama will deliver a much-anticipated policy speech Saturday. Roadside newspaper stands and radio and television talk shows are flooded with Ghanaians eager to add their opinions and advice to the U.S.-Africa debate.

A Model For Africa

After a checkered early history of coups and military rule, Ghana now is often held up as an African example of solid economic reform and democratic government, after two peaceful transfers of power through the ballot box. That includes multiparty elections last December, after deeply flawed elections elsewhere on the continent and military takeovers in some countries.

Obama also indicated that there were other factors in choosing Ghana.

"There are both strategic, national security, economic and environmental reasons why we think this region is important," he said.

A Focus On Oil

America's growing dependence on African crude oil supplies is no secret. Ghana is set to begin pumping oil soon in a part of the world that is becoming increasingly strategic for the U.S., as it looks for alternative energy sources to Middle East imports.

Emmanuel Akwetey is a political scientist and executive director of the Institute for Democratic Governance in Ghana.

"Although you would not see Obama as President [George W.] Bush, whose agenda anywhere had to be tied to the search of oil, America in the current situation and given its experiences in the Middle East ... certainly would have strategic interests that are also economic. And oil is always a big thing," he says.

A growing concern for the U.S. is safeguarding a reliable flow of oil from Africa in a turbulent region that one observer says has become a playground for terrorists. Washington is concerned about security along the oil-exporting Gulf of Guinea coastline.

The hope is that when Ghana begins producing, it will avoid the same fate as other African countries, where oil has been more a curse than a blessing. That is where AFRICOM, the U.S. military command that maintains relations with 53 African countries, could play a leading role.

Niyi Alabi, an analyst and commentator, says Ghana is going to become the headquarters of this command to fight terrorism.

He is convinced AFRICOM is going to Ghana, despite Washington's repeated statements that it has no plans to establish the command's headquarters on the continent.

"Let them deny, but that is perfectly in line with the fact that America would always want to ensure the sources of oil," he says.