Accessibility links
Revolutionary Sounds: A Bastille Day Music Mix The streets of Paris might have been in chaos in 1789, but music still rang out. Commentator Miles Hoffman leads a guided Bastille Day tour through the music of the French Revolution.

Slimming Down The Classics

Insults And Praise On The Classical Campaign

Heifetz And Kreisler: Setting Standards For The Violin 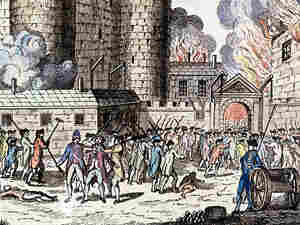 The Bastille in Paris was stormed on July 14, 1789, igniting the French Revolution. Getty Images hide caption 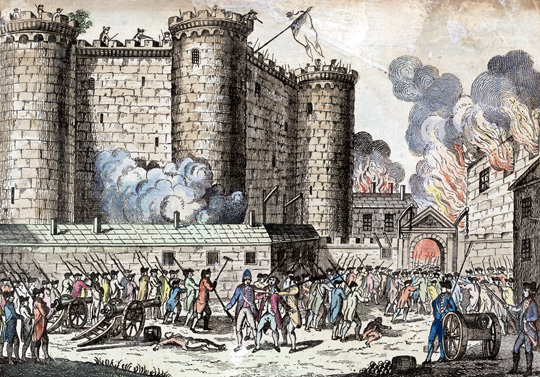 The Bastille in Paris was stormed on July 14, 1789, igniting the French Revolution.

Imagine it's the year 1789 and you are waking up in Paris. You might hear an angry mob outside your window, about to storm the Bastille prison. Tonight, however, the mobs in Paris will be happy — celebrating Bastille Day, which marks the beginning of the French Revolution and the beginning of the end of French royalty.

Along with all the ruckus and rioting that accompanied the revolution, commentator Miles Hoffman says there was also music in the air.

Drop in to any concert hall or ballroom and you could have heard plenty of Italian and French opera, choral music and orchestras. But most of the significant music of the day, Hoffman says, was not written by the French.

"The most important composers in France at the time were foreigners," Hoffman says. "One of the composers very well known in Paris at the time of the revolution and just before was Joseph Haydn." He was commissioned to write a set of six symphonies, known as the "Paris" symphonies today. One of them turned out to be a particular favorite of Marie Antoinette, and was later nicknamed "The Queen."

Music was not suppressed during the revolution, Hoffman says. The theaters and opera houses were not shut down.

"The people who were in power were aristocrats or members of the upper middle class, and they didn't necessarily have an allergy to high culture. They co-opted classical music. They inspired, or directed, important composers of the time to write great ceremonial pieces for big outdoor celebrations. So music became, in a sense, a tool of the revolution." And it became very grandiose, such as the Hymne a la Victoire by Luigi Cherubini.

Music Of The Masses

Hoffman notes that the revolution spawned almost 3,000 popular songs, including the prominent hit of 1790 called "Ca ira" ("It'll be fine") which people sang in the streets. As the revolution became more violent, the words to the song were altered accordingly ("aristocrats to the lampposts, we'll hang them ...").

But eclipsing that song, and outlasting it, Hoffman says, is "La Marseillaise."

Legacy Of A Revolution

Was music changed by the French Revolution? Hoffman says one of the obvious ways was that a certain spirit of grandiosity became more common.

"Bombast, when it's not tied to genius, is just loud and gives you a headache," Hoffman says. "When it is tied to genius, as it was with Beethoven and later Berlioz, they took some of these ideas of grandiosity and they turned it into great music. Music that was great in itself and music that influenced great composers who came afterward."