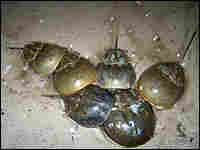 Horseshoe crabs pile onto a female to fertilize her eggs. Louisa Jonas for NPR hide caption 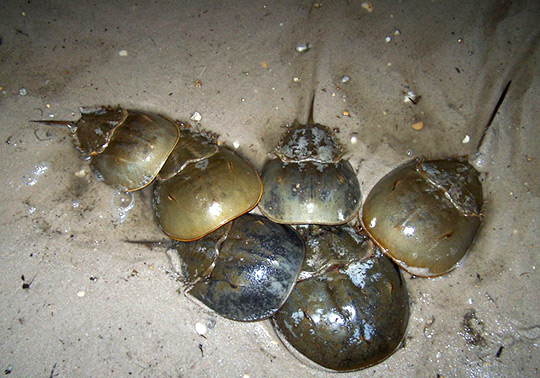 Horseshoe crabs pile onto a female to fertilize her eggs.

Get The Podcast Of This Story

This story originally broadcast as a part of WYPR's "Nature's Bounty" series.

On the Delaware Bay shore, there's a swinging party that's been taking place for millions of years.

If you're a female horseshoe crab, then it's your night. You'll swim to shore, meet a special someone and he'll clasp onto the back of your shell. You and he will crawl onto the beach together, where you'll spawn at high tide under the light of the full moon.

But the mate attached to your shell is not your only tryst. On this night, you will mate with up to 13 males, all at the same time. Thousands of horseshoe crabs will pile on top of one another, glistening shells covering the beach for miles.

"We just love the whole phenomena of how once a year, for a season, they do this incredible mating on the beach," Keith Rutter says. "I don't know how anybody can watch this and not get excited about nature and science and how things work in the world."

The Delaware Bay shore is the site of the largest horseshoe crab spawning in the world, but in the 1990s the horseshoe crab population in the bay plummeted. So on this night, at the world's epicenter of horseshoe crab sex, volunteers in headlamps and waders will tally up the amorous crabs.

Horseshoe crabs are weird, like armadillos of the sea. Their shells look like armored helmets and their tails resemble swords. And then there are the eyes. They have 10 of them — including one on that spiked tail that helps them tell time. Their strange design is time-tested; they haven't evolved much for more than 400 million years. We're talking before the dinosaurs — before flying insects, even.

Scientists call horseshoe crabs living fossils. Master generalists, they've survived asteroids, volcanoes and ice ages. But on the beach, there's no such thing as safe sex. About 10 percent of crabs die upside down when they can't right themselves during spawning.

Stew Michels, a fisheries scientist from the Delaware Division of Fish and Wildlife, is leading the night's survey. He takes a look at a single pile of crabs, a number of males on top of a female buried about 10 centimeters down.

"Attached to her rear is a single male, and he can fertilize the eggs exclusively if there's no other males around," Michels explains. "However, there's lots of males on this beach and they're all competing to reproduce with the female."

In one sitting, each female lays about 4,000 tiny green eggs that look like clumps of pesto in the sand. In a few weeks, only the luckiest of eggs will hatch and billions of eraser-sized horseshoe crab babies will wash into the bay.

At exactly 9:04 p.m., at high tide, the teams get to work. Jordan, the eldest Rutter daughter, thrusts her French-tip manicured fingers into the foamy surf. She gropes the spawning crabs in a one-square-meter grid, distinguishing males from females. She finds 13 males and two females.

It's not so easy to determine who's who in the breaking waves, with the crabs three layers deep in places. But the Rutters move fast. They have to cover one kilometer of beach before the tide recedes and the creatures disappear back into the water. Keith and his wife, Pam, have been bringing their daughters to Delaware to count spawning horseshoe crabs since the girls were small.

"You feel like you're part of the bigger world here," Pam says. "It's pitch dark right now, and all of this is happening. It's pretty amazing."

By sunrise, most of the crabs will have vanished, but if it's been a successful spawn, so many eggs will cover the sand that the shore will shine emerald green for miles.

Recent surveys suggest that the horseshoe crab population may be stabilizing, and everyone here hopes this latest count will show an increase in spawning. The crabs themselves are certainly doing what they can; even after the tide recedes, a few determined, solitary males patrol the beach, still scanning the deserted sand for a mate.