Accessibility links
Grizzly Bear: Haunted Songs from a 'Yellow House' Grizzly Bear's music is an equally intimate and intense take on indie-folk, complete with ambitious arrangements, unique instrumentation and dreamy, almost choral doo-wop harmonies. Hear an interview with the Brooklyn band, as well as a performance on KEXP in Seattle. 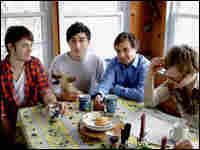 Hear the Music, Not the Talk

Pop Sessions, a new weekly feature, presents some of today's most exciting musicians as they chat and perform in the studio with public radio hosts from around the country.

Grizzly Bear is capable of making magic. When the group performed at the KEXP studio the room was completely still, the air felt thick. I sat there holding my breath, fearing that the slightest inhalation would break the spell the band cast with its haunting, faraway sound and echoing vocals.

Three of the songs appear on the latest album, Yellow House, including the popular "Knife," which takes on a new life with minimal instrumentation and soaring melodies. The band also puts a dark twist on an old girl-group classic — "He Hit Me (And it Felt Like a Kiss)" by the Crystals. Grizzly Bear recaptures the sadness and misguided yearning that songwriters Gerry Goffin and Carole King originally intended for the song. It was a mesmerizing moment — beautiful, magical and not soon to be forgotten.

Grizzly Bear began as a bedroom project for Brooklyn-based singer-songwriter Edward Droste, who used it as a vehicle for his woozily gentle break-up songs. After the release of Horn of Plenty, Grizzly Bear morphed into a full band, complete with lush instrumentation, but its songs remain intimate and delicate. (They're also surprisingly versatile, having spawned an electronic remix disc.) On Grizzly Bear's newest studio album, 2006's Yellow House, the group sounds more meticulous and elegantly arranged than ever, while losing none of the emotional heft of Droste's early recordings.

Seattle-based KEXP-FM and KEXP.org present a diverse mix of music, live performances and podcasts from indie-rock and punk to jazz and old-school soul.