Accessibility links
Flint, Mich.: Growing Stronger By Growing Smaller? As Rust Belt cities empty out, some locals want to shrink the cities to help save them, replacing abandoned houses and vacant lots with green spaces. 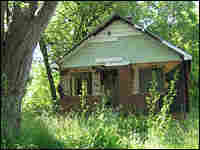 One-third of the homes in Flint, Mich., have been abandoned. Anthony Brooks/NPR hide caption 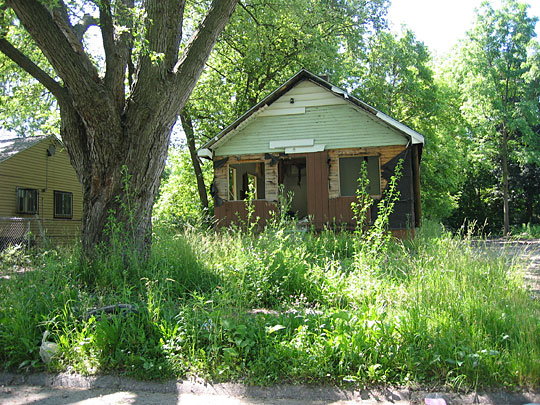 One-third of the homes in Flint, Mich., have been abandoned. 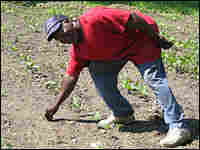 Harry Ryan runs a community garden on a plot of land where five houses used to stand. The garden provides free fruit and vegetables to Flint's old east side. Anthony Brooks/NPR hide caption 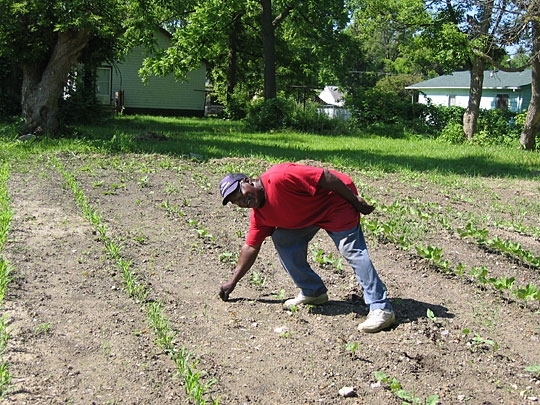 Harry Ryan runs a community garden on a plot of land where five houses used to stand. The garden provides free fruit and vegetables to Flint's old east side.

Dan Kildee wants to save the city where he was raised by shrinking it. The city is Flint, Mich., in Genesee County, where Kildee is treasurer.

"There's an obsession with growth and expansion," Kildee says. "I'm not against growth, but what we really have to recognize is that we have already shrunk. And because we are not growing does not mean we can't be a good city."

The concept of "shrinking cities" is not new. The idea is to bulldoze entire neighborhoods. The smaller city would then be cheaper to run and help pave the way for better times ahead, advocates say.

Today, Kildee says, his hometown "looks like the Lower 9th Ward in New Orleans — a sort of a slow-motion [Hurricane] Katrina."

Empty houses and vacant lots can be seen on block after block. The numbers tell the story of a dying city. At its peak, Flint was home to General Motors, with a growing population of some 200,000 people. It was a GM factory town with some 80,000 auto industry jobs. Today, the population is about half what it once was, and only a few thousand auto jobs remain. More than one-third of the homes in Flint have been abandoned.

As the county treasurer, Kildee heads the County Land Bank, which has been buying up thousands of abandoned and foreclosed properties. He has control of large portions of Flint — which gives him a powerful tool to reshape the city.

"What we really need is a new map, literally a design of the city that looks at every block in every neighborhood, and then makes decisions about where it makes sense to either let nature take the land back or to create some intentional open green space," Kildee says. "So that 100,000 people can live in a city that does not look half-empty."

One way residents are filling the city is with community gardens. One of them is managed by Harry Ryan, a retired electrician and real estate agent who lives in Flint's old east side. Just across the street from his home, where five houses used to stand, the land bank has helped him plant a sprawling community garden, which provides free fruit and vegetables to this part of the city.

Ryan says growing food one of the benefits of a plan to shrink Flint. "I look at it like this: Something has to be done with this abandoned land. So, I think, [in] every transition there are going to be negatives, but look at the positives. This was a junk pile," Ryan recalls.

"Now people are eating from it. I know there are complaints, but we do not have the 230,000 people [anymore]."

Some complaints are prompted by fears of just what Flint's leaders intend to do with which neighborhoods. Last month, Flint's acting mayor, Michael Brown, stirred controversy when he spoke publicly about "shutting down quadrants of the city."

That stoked fears of forced relocations and alarmed lifelong residents like Lotti Ferguson.

"The people that will be displaced — what happens to them?" she wonders. "My husband and I bought this house six years ago, and the house next door is empty. The house across the street sold for half of what we purchased our house for. And I still would not [want] to lose the home that we chose to raise our family in."

Dayne Walling, who is running for mayor in Flint, says there are lots of people like Ferguson. He calls the whole "shrinking city" idea misguided and says it smacks of surrender.

"There are certainly thousands of properties that need to be demolished — they're not fit for human habitation," Walling acknowledges. "But it doesn't follow that the other residents on the block want to move to some other place.

Will A Smaller City Be Stronger?

Alan Mallach, an urban planner with the Brookings Institution, says the debate in Flint is similar to debates in a number of other Rust Belt cities. He argues that shrinking cities is politically fraught, but he says Flint and other cities like it may have no other choice.

"I don't think any city has figured out how to do this yet," he says

Given the pain of urban renewal policies of the 1960s, which decimated many inner-city neighborhoods, Mallach says it's understandable that residents would be suspicious of grand government plans like this.

For his part, County Treasurer Kildee says there is no official plan to shrink Flint yet — it's just an idea that makes sense. But he says that whatever happens, nobody would be forced to move.

"If they choose to live where the population is essentially gone, we need to give them something green and beautiful," Kildee says.

"But give them the choice to relocate into a denser, more high-functioning neighborhood. That's really the point of all this: The people who live in these neighborhoods deserve better. We have to think about what's in their interest."

Kildee believes that a smaller and greener Flint would be a stronger Flint, and he might be right. But there's the problem of how to pay for it, and a broader political challenge: In a culture that has long embraced economic expansion and growth, proponents of shrinking cities must make the case that what they're arguing for isn't surrender, but the idea that a smaller city might in fact be a better city.