Accessibility links
Sotomayor: 'Fidelity To The Law' Guides Me Judge Sonia Sotomayor told the Senate Judiciary Committee on Monday that her experiences "help me listen and understand, with the law always commanding the result." Republicans raised concerns about her impartiality, while Democrats praised her years on the federal bench.

Sotomayor: 'Fidelity To The Law' Guides Me

Sotomayor: 'Fidelity To The Law' Guides Me

Special Coverage Of The Confirmation Hearing 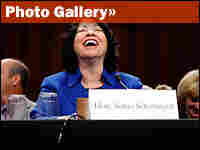 Day 1 Of The Sotomayor Hearings

Judge Sonia Sotomayor: 'My Judicial Philosophy Is Fidelity To The Law' 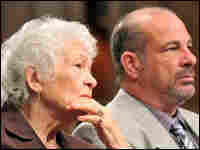 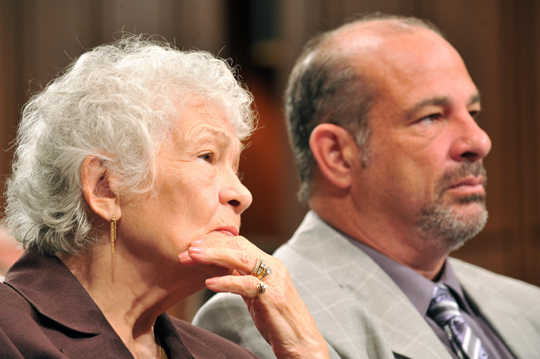 On the first day of her confirmation hearing to the Supreme Court, Judge Sonia Sotomayor described her judicial philosophy in four words: "fidelity to the law."

"In each case I have heard," Sotomayor told the Senate Judiciary Committee, "I have applied the law to the facts at hand."

Some senators have said Sotomayor compromises her impartiality as a judge by relying too heavily on her personal background. Sotomayor said to them, "My personal and professional experiences help me listen and understand, with the law always commanding the result in every case."

In her opening statement, Sotomayor described her personal and professional history at length, calling her life story "uniquely American."

The statement capped a day in which senators drew the battle lines for hearings to confirm President Obama's first Supreme Court nominee.

Democrats focused on Sotomayor's judicial record and life story. Republicans, meanwhile, criticized Sotomayor's speeches and other comments off the bench, as they sought to turn the hearing into a broader referendum on the proper role of a judge.

Sotomayor spent much of the day in listening mode, as senators raked over her judicial record. Her supporters sat behind her, including her 81-year-old mother. When Senate Judiciary Committee Chairman Patrick Leahy invited Sotomayor to introduce her family at the start of the day, she replied, "If I introduced everybody that's family-like, we'd be here all morning."

Leahy, a Democrat from Vermont, described Sotomayor's nomination as "another step along the path" to a more perfect union.

If confirmed, Sotomayor — currently a judge on the Second Circuit Court of Appeals — would be the first Hispanic and the third woman ever to serve on the Supreme Court. Leahy compared her nomination to landmark civil rights developments such as the 1965 Voting Rights Act and warned opponents not to "demean this extraordinary woman."

He praised Sotomayor's qualifications, noting that she has "more federal judiciary experience than any nominee to the Supreme Court in nearly 100 years."

South Carolina Republican Sen. Lindsey Graham expressed what many senators have said privately. "Unless you have a complete meltdown, you're going to get confirmed," he said.

While Democrats described Sotomayor's nomination as a fulfillment of the American dream, critics questioned Sotomayor's impartiality, asking whether her ethnicity and gender have exerted too much of an influence over her judicial philosophy.

Sen. Jeff Sessions of Alabama, the committee's ranking Republican, said he plans to ask about Sotomayor's comment that a "wise Latina woman" would make better decisions in some cases than a white man who has not had the same experiences.

People "assume the nominee misspoke," said Sessions, "but the nominee did not misspeak. She is on record as making the statement at least five times over the course of a decade."

"I'm afraid our system will only be further corrupted as a result of President Obama's views that in tough cases, the critical ingredient for a judge is 'the depth and breadth of one's empathy,'" Sessions said.

Other GOP senators echoed similar concerns. Sen. Charles Grassley of Iowa said to Sotomayor, "In one speech, you doubted that a judge could ever be truly impartial."

Leahy said such concerns "sought to create a caricature of Judge Sotomayor."

"As we proceed, let no one distort the judge's record," Leahy said.

'Entire Record' On The Table

New York Democrat Sen. Charles Schumer said Sotomayor's record reflects "that she is in the mainstream. She has agreed with Republican colleagues 95 percent of the time."

But Utah Republican Sen. Orrin Hatch noted that Sotomayor's role on the Supreme Court will be less constricted than her role as a lower court judge. She "will help change the very precedents that today bind her as a circuit court of appeals judge," said Hatch. For that reason, he said, senators must examine "her entire record, her speeches and articles, as well as her judicial decisions."

Sen. Sheldon Whitehouse, a Democrat from Rhode Island, was one of the few Democrats to defend the role of empathy and personal experience in a judge. "The empathy President Obama saw in you has a constitutionally proper place" in the courtroom, said Whitehouse.

The hearings will last several days, with questioning of Sotomayor scheduled to begin on Tuesday.

At several points during Monday's hearing, anti-abortion protesters interrupted the proceedings and were escorted from the room.

As Republicans challenge Sotomayor, they walk a difficult tightrope. Hispanics are the fastest-growing voting group in the United States. Republicans must be careful not to alienate Latinos, who strongly support Sotomayor, even as Republican senators question Sotomayor's judicial philosophy.

Sen. Jon Kyl, a Republican from Arizona, captured this tension in his opening statement.

"I would hope that every American is proud that a Hispanic woman has been nominated to sit on the Supreme Court," said Kyl, but "we must evaluate Judge Sotomayor's fitness to serve on the merits, not on the basis of her ethnicity."