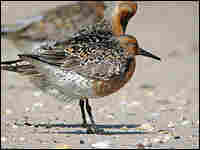 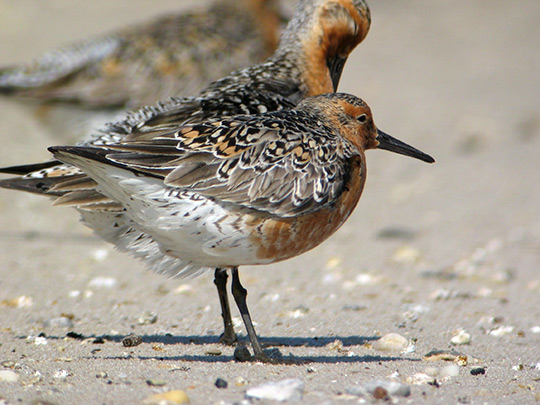 Plump and hoping to get plumper, a red knot takes a break from eating horseshoe crab eggs at Mispillion Harbor. 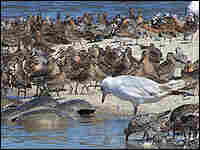 Red knots and other migratory shorebirds feed on horseshoe crab eggs even as the crabs mate on a beach in Mispillion Harbor. Louisa Jonas/WYPR hide caption 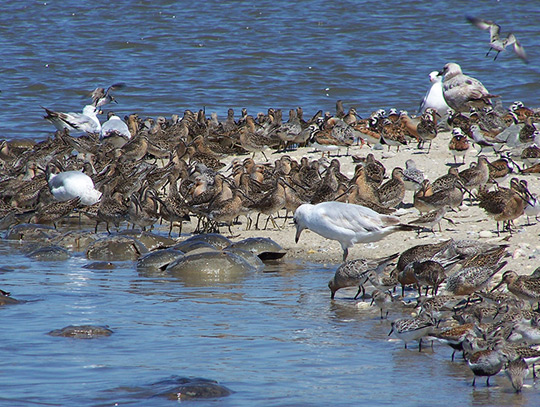 Red knots and other migratory shorebirds feed on horseshoe crab eggs even as the crabs mate on a beach in Mispillion Harbor. 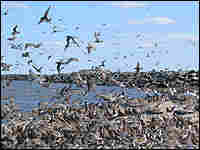 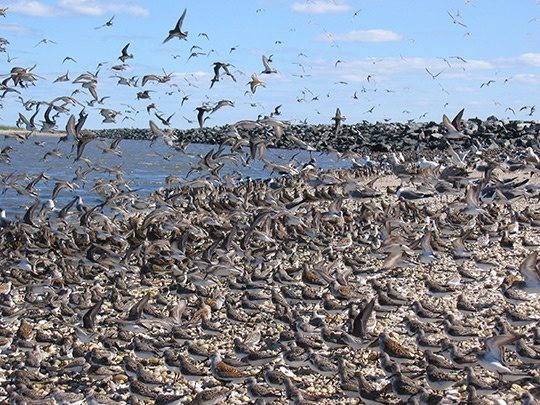 Horseshoe Crabs Pile Up For Night Of Whoopee July 11, 2009

Get The Podcast Of This Story

This story originally broadcast as a part of WYPR's "Nature's Bounty" series.

Less than 20 miles from the casinos in downtown Dover, a lanky man in a floppy hat and windbreaker is hiding behind shrubbery on a beach in Mispillion Harbor.

Nigel Clark is from the British Trust for Ornithology. He's peering through his scope, trying to read tags on the legs of hundreds of migratory shorebirds feeding in front of him.

"It's amazing on these beaches to think we find birds marked in Brazil or Argentina, the very southern tip of Southern America — right at Tierra Del Fuego. That's where a majority of these birds are coming from," Clark says.

A Vital Rest Stop For The Red Knot

Clark is particularly interested in the red knot, a chestnut-colored bird about the size of a robin.

The red knots winter in Argentina but fly 10,000 miles to the high Arctic to breed.

To prepare for their journey, they shrink their own digestive organs and turn the tissue into fuel to burn in flight. By the time they look down on the shores of the Delaware Bay, they're really hungry.

"When a bird arrives, they are literally skin and bone," Clark says. "Very thin and sleek birds running around with extremely large legs, it seems."

Delaware is the red knots' most important feeding stop on their trip. They time their arrival to perfectly coincide with the annual horseshoe crab spawning here. The crabs lay billions of pearly-green, caviar-sized eggs. Many of these eggs would just dry out or wash away, but instead they become a banquet for the migratory shorebirds.

"The birds are feeding on really the surplus eggs in the population," Clark says. "It really is a case of nature's bounty they're taking, rather than the fact that the birds are stopping the crab's breeding."

The red knots only have a few weeks to build up enough fat reserves to fuel the last leg of their journey. They eat so greedily that stretches of sand can be completely hidden by their red breasts and little pecking heads.

By the time they set off, they look like little balls, Clark says. "They look like they have short legs because they are carrying so much fat on their breast, and they almost waddle."

Clark is one of 20 or so volunteers from around the world who gather here every year as part of the Delaware Shorebird Project. Jacquie Clark, Nigel's wife, also works for the project.

Jacquie Clark says the bounty of crab eggs in Delaware in late spring is a striking example of nature's synchronicity. The red knots need that fuel to get to the Arctic to breed exactly when there will be plenty of food for their chicks — and that's only for two short months in the summer.

"Hopefully, they'll get the timing just right," she explains. "It's critical they arrive just as the snow melts and they can lay their clutch of eggs really quickly. As their eggs hatch, it should be just about the same time that the insects hatch as well, so the chicks are getting enough food."

Something's Wrong With The Red Knot

But something is going wrong for the red knots. Nigel Clark says the population has crashed since the 1990s, and the red knot is now a candidate species under the Endangered Species Act. Climate change may be affecting when the ground thaws in the Arctic, or there may not be enough horseshoe crab eggs in Delaware to fatten up the birds.

To figure out if that's part of the problem, the volunteers are checking whether the birds are gaining enough weight.

"Red knot and the Delaware Bay in the Americas is absolutely intertwined and critical," Nigel Clark says. "There is nowhere else in the world where a population of birds is so dependent on such a small area. If they don't have Delaware Bay, they won't get to the Arctic, they won't breed, and the population will die out. It's as simple as that."

From the measurements the group has taken, this year turns out to be a pretty good one for the red knots in Delaware.

But in order for the population to recover, the birds need several good years in a row — and not just in Delaware, but in Argentina and in the Arctic, too.