Accessibility links
Opening Statement: Sen. Patrick Leahy Read the opening statement, as prepared for delivery, by Sen. Patrick Leahy, chairman of the Senate Judiciary Committee, at the beginning of the confirmation hearing for Judge Sonia Sotomayor to be an associate justice of the U.S. Supreme Court. 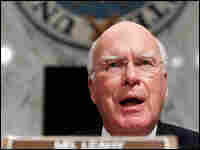 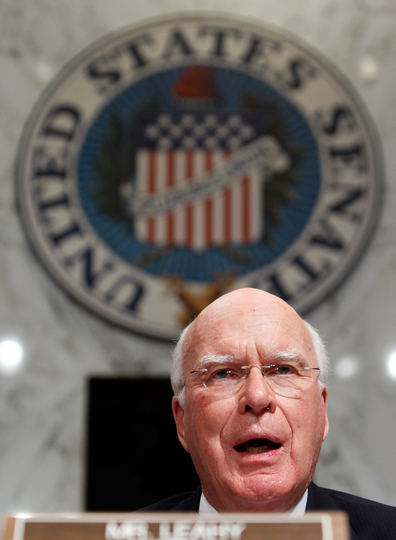 The following is the prepared opening statement of Sen. Patrick Leahy, Democrat of Vermont, the chairman of the Senate Judiciary Committee, at the beginning of the confirmation hearing on Monday for Judge Sonia Sotomayor to be an associate justice of the U.S. Supreme Court.

Today, we consider the nomination of Judge Sonia Sotomayor to be a Justice of the United States Supreme Court. Our Constitution assigns just 101 of us the responsibility to act on behalf of all 320 million Americans in considering this important appointment. The President has done his part and made an historic nomination. Now it is up to the Senate to do its part on behalf of the American people.

President Obama often quotes Dr. Martin Luther King, Jr.'s insight that "the arc of the moral universe is long, but it bends toward justice." Each generation of Americans has sought that arc toward justice. We have improved upon the foundation of our Constitution through the Bill of Rights, the Civil War amendments, the 19th Amendment's expansion of the right to vote to women, the Civil Rights Act of 1964 and Voting Rights Act of 1965, and the 26th Amendment's extension of the right to vote to young people. These actions have marked progress toward our more perfect union. This nomination can be another step along that path.

Judge Sotomayor's journey to this hearing room is a truly American story. She was raised by her mother, Celina, a nurse, in the South Bronx. Like her mother, Sonia Sotomayor worked hard. She graduated as the valedictorian of her class at Blessed Sacrament and at Cardinal Spellman High School in New York. She was a member of just the third class at Princeton University in which women were included. She continued to work hard, including reading classics that had been unavailable to her when she was younger and arranging tutoring to improve her writing. She graduated summa cum laude, Phi Beta Kappa, and was awarded the M. Taylor Senior Pyne Prize for scholastic excellence and service to the university, an honor awarded for outstanding merit.

After excelling at Princeton she entered Yale Law School, where she was an active member of the law school community. Upon graduation, she had many options but chose to serve her community in the New York District Attorney's Office, where she prosecuted murders, robberies, assaults and child pornography.

The first President Bush named her to the Federal bench in 1992, and she served as a trial judge for six years. President Clinton named her to the United States Court of Appeals for the Second Circuit where she has served for more than 10 years. She was confirmed each time by a bipartisan majority of the Senate.

Judge Sotomayor's qualifications are outstanding. She has more Federal court judicial experience than any nominee to the United States Supreme Court in 100 years. She is the first nominee in well over a century to be nominated to three different Federal judgeships by three different Presidents. She is the first nominee in 50 years to be nominated to the Supreme Court after serving as both a Federal trial judge and a Federal appellate judge. She will be the only current Supreme Court Justice to have served as a trial judge. She was a prosecutor and a lawyer in private practice. She will bring a wealth and diversity of experience to the Court. I hope all Americans are encouraged by Judge Sotomayor's achievements and by her nomination to the Nation's highest court. Hers is a success story in which all Americans can take pride.

Those who break barriers often face the added burden of overcoming prejudice. That has been true on the Supreme Court. Thurgood Marshall graduated first in his law school class, was the lead counsel for the NAACP Legal Defense Fund, sat on the United States Court of Appeals for the Second Circuit, and served as the Nation's top lawyer, the Solicitor General of the United States. He won a remarkable 29 out of 32 cases before the Supreme Court. Despite his qualifications and achievements, at his confirmation hearing, he was asked questions designed to embarrass him, questions such as "Are you prejudiced against the white people of the South?"

The confirmation of Justice Louis Brandeis, the first Jewish American to be nominated to the high court, was a struggle rife with anti-Semitism and charges that he was a "radical". The commentary at the time included questions about "the Jewish mind" and how "its operations are complicated by altruism." Likewise, the first Catholic nominee had to overcome the argument that "as a Catholic he would be dominated by the pope."

I trust that all Members of this Committee here today will reject the efforts of partisans and outside pressure groups that have sought to create a caricature of Judge Sotomayor while belittling her record, her achievements and her intelligence. Let no one demean this extraordinary woman, her success, or her understanding of the constitutional duties she has faithfully performed for the last 17 years. I hope all Senators will join together as we did when we considered President Reagan's nomination of Sandra Day O'Connor as the first woman to serve on the Supreme Court and voted unanimously to confirm her.

This hearing is an opportunity for Americans to see and hear Judge Sotomayor for themselves and to consider her qualifications. It is the most transparent confirmation hearing ever held. Judge Sotomayor's decisions and confirmation materials have been posted online and made publicly available. The record is significantly more complete than that available when we considered President Bush's nominations of John Roberts and Samuel Alito just a few years ago. The Judge's testimony will be carried live on several television stations and live via webcast on the Judiciary Committee website.

My review of her judicial record leads me to conclude that she is a careful and restrained judge with a deep respect for judicial precedent and for the powers of the other branches of the government, including the law-making role of Congress. That conclusion is supported by a number of independent studies that have been made of her record, and shines through in a comprehensive review of her tough and fair record on criminal cases. She has a deep understanding of the real lives of Americans, the duty of law enforcement to help keep Americans safe, and the responsibilities of all to respect the freedoms that define America.

Unfortunately, some have sought to twist her words and her record and to engage in partisan political attacks. Ideological pressure groups have attacked her before the President had even made his selection. They then stepped up their attacks by threatening Republican Senators who do not oppose her.

Our ranking Republican Senator on this Committee reflected on the confirmation process recently, saying: "What I found was that charges come flying in from right and left that are unsupported and false. It's very, very difficult for a nominee to push back. So I think we have a high responsibility to base any criticisms that we have on a fair and honest statement of the facts and that nominees should not be subjected to distortions of their record." I agree. As we proceed, let no one distort Judge Sotomayor's record. Let us be fair to her and to the American people by not misrepresenting her views.

Judge Sotomayor has been nominated to replace Justice Souter, whose retirement last month has left the Court with only eight Justices. Justice Souter served the Nation with distinction for nearly two decades on the Supreme Court with a commitment to justice, an admiration for the law, and an understanding of the impact of the Court's decisions on the daily lives of ordinary Americans. I believe that Judge Sotomayor will be in this same mold and will serve as a Justice in the manner of Sandra Day O'Connor, committed to the law and not to ideology.

In the weeks and months leading up to this hearing, I have heard the President and Senators from both sides of the aisle make reference to the engraving over the entrance of the Supreme Court. The words engraved in that Vermont marble say: "Equal Justice Under Law." Judge Sotomayor's nomination keeps faith with those words.