Accessibility links
Opening Statement: Sen. Jeff Sessions Read the opening statement, as prepared for delivery, by Sen. Jeff Sessions, ranking Republican of the Senate Judiciary Committee, at the beginning of the confirmation hearing for Judge Sonia Sotomayor to be an associate justice of the U.S. Supreme Court. 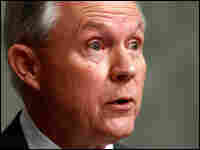 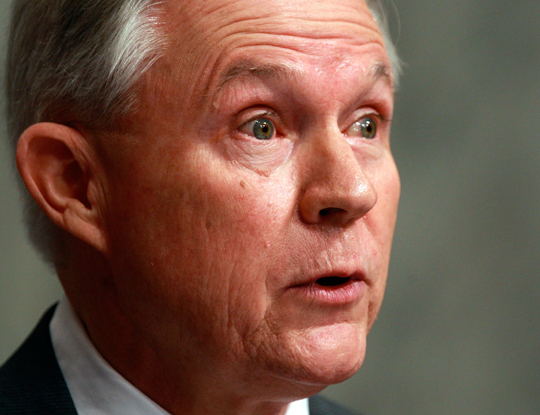 The following is the opening statement, as prepared for delivery, of Sen. Jeff Sessions, Republican of Alabama, the ranking Republican of the Senate Judiciary Committee, at the beginning of the confirmation hearing on Monday for Judge Sonia Sotomayor to be an associate justice of the U.S. Supreme Court.

Before I begin, I want to thank Chairman Leahy for his openness and willingness to work together on the procedures for this hearing.

I hope it will be viewed as the best hearing this Committee has ever held.

This hearing marks an important milestone in your distinguished legal career. I know your family is proud, and rightfully so. It is a pleasure to have them with us today.

I expect this hearing and resulting debate to be characterized by a respectful tone, a discussion of serious issues, and a thoughtful dialogue, and I have worked hard to achieve that from day one.

I have been an active litigator in federal courts for the majority of my professional life. I have tried cases in private practice, as a federal prosecutor with the Department of Justice, and as Attorney General of the State of Alabama.

The Constitution and our great heritage of law are things I care deeply about — they are the foundation of our liberty and prosperity.

This nomination hearing is critically important for two reasons.

First, Justices on the Supreme Court have great responsibility, hold enormous power, and have a lifetime appointment.

Just five members can declare the meaning of our Constitution, bending or changing its meaning from what the people intended.

Second, this hearing is important because I believe our legal system is at a dangerous crossroads.

Down one path is the traditional American legal system, so admired around the world, where judges impartially apply the law to the facts without regard to their own personal views.

This is the compassionate system because this is the fair system.

In the American legal system, courts do not make the law or set policy, because allowing unelected officials to make laws would strike at the heart of our democracy.

"I . . . do solemnly swear that I will administer justice without respect to persons, and do equal right to the poor and to the rich, and that I will faithfully and impartially discharge and perform all the duties incumbent upon me . . . under the Constitution and laws of the United States. So help me God."

These principles give the traditional system its moral authority, which is why Americans respect and accept the rulings of courts — even when they lose.

Indeed, our legal system is based on a firm belief in an ordered universe and objective truth. The trial is the process by which the impartial and wise judge guides us to the truth.

Down the other path lies a Brave New World where words have no true meaning and judges are free to decide what facts they choose to see. In this world, a judge is free to push his or her own political and social agenda. I reject this view.

We have seen federal judges force their own political and social agenda on the nation, dictating that the words "under God" be removed from the Pledge of Allegiance and barring students from even silent prayer in schools.

Judges have dismissed the people's right to their property, saying the government can take a person's home for the purpose of developing a private shopping center.

Judges have — contrary to the longstanding rules of war — created a right for terrorists, captured on a foreign battlefield, to sue the United States government in our own courts.

Judges have cited foreign laws, world opinion, and a United Nations resolution to determine that a state death penalty law was unconstitutional.

I'm afraid our system will only be further corrupted as a result of President Obama's views that, in tough cases, the critical ingredient for a judge is the "depth and breadth of one's empathy," as well as "their broader vision of what America should be."

Like the American people, I have watched this for a number of years, and I fear this "empathy standard" is another step down the road to a liberal activist, results-oriented, and relativistic world where:

• Americans are seen as members of separate groups rather than simply Americans, and

• Where the constitutional limits on government power are ignored when politicians want to buy out private companies.

So, we have reached a fork in the road. And there are stark differences between the two paths.

I want to be clear:

I will not vote for — no senator should vote for — an individual nominated by any President who is not fully committed to fairness and impartiality towards every person who appears before them.

I will not vote for — no senator should vote for — an individual nominated by any President who believes it is acceptable for a judge to allow their own personal background, gender, prejudices, or sympathies to sway their decision in favor of, or against, parties before the court.

In my view, such a philosophy is disqualifying.

Such an approach to judging means that the umpire calling the game is not neutral, but instead feels empowered to favor one team over the other.

Call it empathy, call it prejudice, or call it sympathy, but whatever it is, it is not law. In truth it is more akin to politics. And politics has no place in the courtroom.

Some will respond, "Judge Sotomayor would never say that it's acceptable for a judge to display prejudice in a case."

But, I regret to say, Judge Sotomayor has outlined such a view in many, many statements over the years.

We've all seen the video of the Duke University panel where Judge Sotomayor says "... it is [the] Court of Appeals where policy is made. And I know, and I know, that this is on tape, and I should never say that."

And during a speech 15 years ago, Judge Sotomayor said, "I willingly accept that we who judge must not deny the differences resulting from experience and heritage but attempt . . . continuously to judge when those opinions, sympathies, and prejudices are appropriate."

And in the same speech, she said, "my experiences will affect the facts I choose to see as a judge."

Having tried cases for many years, these statements are shocking and offensive to me.

I think it is noteworthy that, when asked about Judge Sotomayor's now-famous statement that a "wise Latina" would come to a better conclusion than others, President Obama, White House Press Secretary Robert Gibbs, and Supreme Court Justice Ginsburg declined to defend the substance of the nominee's remarks.

They each assumed that the nominee misspoke. But the nominee did not misspeak. She is on record making this statement at least five times over the course of a decade.

These are her own words, spoken well before her nomination. They are not taken out of context.

I am providing a copy of the full text of these speeches to the hearing room today.

Others will say that, despite these statements, we should look to the nominee's record, which they characterize as moderate. People said the same of Justice Ginsburg, who is now considered to be one of the most activist judges in history.

Some senators ignored Justice Ginsburg's philosophy and focused on the nominee's judicial opinions. But that is not a good test because those cases were necessarily restrained by precedent and the threat of reversal from higher courts.

On the Supreme Court, those checks on judicial power will be removed, and the judge's philosophy will be allowed to reach full bloom.

But even as a lower court judge, the nominee has made some very troubling rulings.

I am concerned by the nominee's decision in Ricci, the New Haven Firefighters case — recently reversed by the Supreme Court — where she agreed with the City of New Haven's decision to change its promotion rules in the middle of the game.

Incredibly, her opinion consisted of just one substantive paragraph of analysis concerning the major legal question involved in the case.

Judge Sotomayor has said that she accepts that her opinions, sympathies, and prejudices will affect her rulings. Could it be that her time as a leader of the Puerto Rican Legal Defense and Education Fund provides a clue as to her decision against the firefighters?

While the nominee was Chair of the Fund's Litigation Committee, the organization aggressively pursued racial quotas in city hiring and, in numerous cases, fought to overturn the results of promotion exams.

It seems to me that in Ricci, Judge Sotomayor's empathy for one group of firefighters turned out to be prejudice against the others.

That is, of course, the logical flaw in the "empathy standard." Empathy for one party is always prejudice against another.

Judge Sotomayor, we will inquire into how your philosophy, which allows subjectivity into the courtroom, affects your rulings on issues like:

• Abortion, where an organization in which you were an active leader argued that the Constitution requires that taxpayer money be used for abortions;

• Gun control, where you recently ruled that it is "settled law" that the Second Amendment does not prevent a city or state from barring gun ownership;

• Private property, where you have already ruled that the government could take property from one pharmacy developer and give it to another; and

• Capital punishment, where you personally signed a statement opposing the reinstatement of the death penalty because of the "inhuman[e] psychological burden" it places on the offender and his or her family.

I hope the American people will follow these hearings closely.

They should learn about the issues, and listen to both sides of the argument. And, at the end of the hearing, ask: 'If I must one day go to court, what kind of judge do I want to hear my case?

'Do I want a judge that allows his or her social, political, or religious views to change the outcome?

'Or, do I want a judge that impartially applies the law to the facts, and fairly rules on the merits, without bias or prejudice?'

It is our job to determine on which side of that fundamental divide the nominee stands.