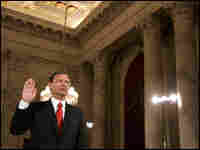 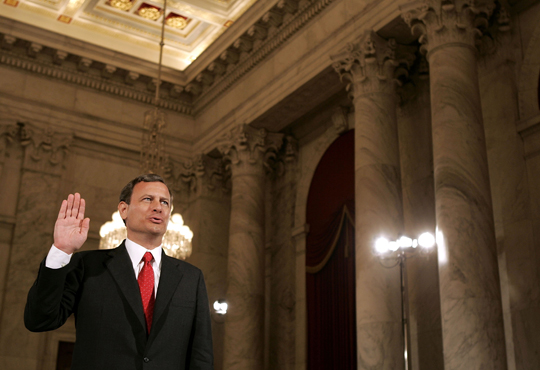 Judge Sonia Sotomayor was, of course, the center of attention Monday, the first day of Senate Judiciary Committee hearings on her nomination to become the nation's first Hispanic and third woman to serve on the U.S. Supreme Court.

But a scrum of other prominent figures not present in the packed Hart Senate Office Building — from President Obama to conservative lawyer Miguel Estrada — muscled their way into the spotlight, as senators wrangled over the nominee's heart and her identification with her Puerto Rican ethnicity.

And, as has become de rigueur in these proceedings, they mused at length over how the appeals court judge might call "balls and strikes" if confirmed for the high court.

Senators from both sides of the aisle expansively acknowledged Sotomayor's qualifications and her history-making role. The late Justice Thurgood Marshall, the high court's first African-American, made an appearance, as did the first woman justice, the now-retired Sandra Day O'Connor, and the court's first Jewish member, the late Louis Brandeis.

So it was often those absent actors who provided vehicles on which the senators not only hung the themes that will run through the coming days of the historic hearings, but also reargued the "judicial" — read "political" — battles of the past.

Republicans focused on Obama's past comments about a judge's empathy and heart being important in decisions in a certain percentage of cases. They asked whether Sotomayor's advocacy on behalf of Latino rights would color her opinions.

Arizona Sen. Jon Kyl, a Republican with a significant Hispanic constituency, criticized Obama for being "outside the mainstream in his statements about how judges should decide cases." And he made a point of quoting Appeals Court Judge Richard Paez, a Mexican-American, in saying that judges must "put aside biases and prejudices" when applying the law.

But Republican senators went further in seeking to assure the Hispanic community. Despite the conservative community's misgivings about Sotomayor, Republicans were quick to note that they were the ones who were on track to point a Latino in the direction of the Supreme Court eight years ago, when President Bush nominated Estrada to the appeals court.

"The Hispanic element of this hearing is not lost" on the panel, Graham said, noting, however, that "Estrada never had a chance to have this hearing."

A Tale Of Two Robertses?

The nomination of Estrada, a Honduran immigrant and former associate solicitor general in the Bush administration, was blocked by Democrats when he refused to release paperwork from his time as a government lawyer.

But Hispanic leaders who filled the rows behind Sotomayor cautioned Republicans from going too far with the Estrada comparison.

"If there are hard feelings harbored about that, well, she had nothing to do with it," says Carlos Ortiz, former president of the Hispanic National Bar Association.

"Miguel Estrada didn't make it to the D.C. District Court," Ortiz says. "It is not a fair comparison."

During his confirmation hearings in 2005, Roberts famously said he viewed the role of a justice as similar to an impartial umpire calling balls and strikes.

In blistering comments, Democratic Sen. Sheldon Whitehouse of Rhode Island characterized Roberts' record as unrelentingly right-leaning since he ascended to the high court — despite his pledge of umpirelike judicial modesty.

"If judging were that mechanical, we would not need nine Supreme Court justices," Whitehouse said. "It's often about defining a strike zone.

"The umpire analogy is belied by Chief Justice John Roberts," he said.

The current nominee pledged much the same.

In her opening statement, Sotomayor invoked her mom — who was, indeed, in the hearing room — and promised what she called a "fidelity to the law."

"The task of a judge is not to make law; it is to apply the law," she said.

But, as with Roberts — and the justice she would replace, David Souter, a GOP appointee who became a reliable liberal — where Sotomayor establishes her strike box will be known only when her high court opinions emerge.

No Ghosts On Tuesday

On Tuesday, when Sotomayor is directly questioned by senators, it will be all about her — not Obama, not Estrada, not Roberts, says Janet Murguia, president and CEO of the National Council of La Raza.

"Ultimately, at the end of the day, this is about Sonia Sotomayor," Murguia says. "And we will be watching to see how she's treated."

"This," she said, "is an interesting moment for the Latino community."