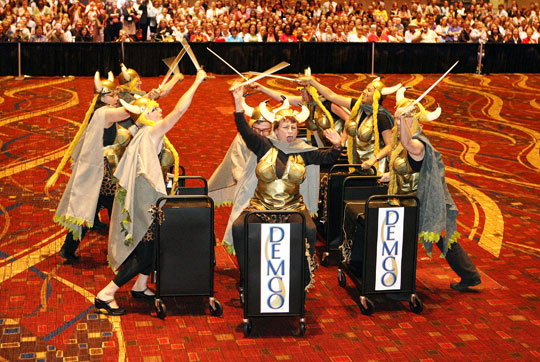 The stereotype of the librarian — horn-rimmed glasses, hair in a bun, finger to her lips stubbornly shushing — was nowhere to be found at this year's Librarian Book Cart Drill Championships held recently in Chicago.

Five teams of librarians — dressed in costumes ranging from Vikings to Elvis Presley — competed for the coveted gold book cart. They marched in drill-team formation, equipped with metal book carts.

Gretchen Roltgen, a 62-year-old librarian with neon blue hair, says it's a long way from Baraboo, Wis., to "the big dance."

"Our carts at home don't do wheelies as well as the models we use here. These are full-competition models," she says. "Absolutely, they're built for this type of rigorous competition."

The event's emcees are Mo Willems and his fellow children's author, Jon Scieszka.

In the conference hall, the competition is set to begin. Every one of the 600-plus seats is full.

One by one, the teams roll out their routines. The Des Plaines, Ill., Cart Wheels go with a Grease theme, in Pink Lady and T-Bird getups. As the music plays, they maneuver their carts into elaborate formations. They link up in long trains and turn intricate choreography.

The team from Oak Park, Ill., makes the day's most dramatic entrance. They swoop in wearing full Viking regalia, including horns, breast plates and swords.

As the dust settles after their performance, the judges tabulate the scores.

The tie is broken with the old audience applause-o-meter. The room falls silent, awaiting the judges' call.

This contest was about having a good time, but the emcees did leave the crowd with an important message: Support your local libraries and the crazy people who work there.

Watch The Winners Of This Year's "Gold Book Cart" Perform