Accessibility links
Sotomayor Differs With Obama On 'Empathy' Issue Judge Sonia Sotomayor told senators Tuesday that she disagrees with the president's statement that "what is in the judge's heart" can be critical in some judicial decisions. "It's not the heart that compels conclusions in cases, it's the law," she said. 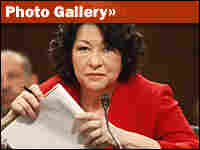 Sotomayor: 'My Sympathies Have Never Influenced My Judicial Decisions'

Sotomayor On The 'Wise Latina' Remark 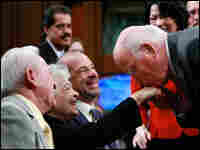 Senate Judiciary Committee Chairman Sen. Patrick Leahy, a Democrat from Vermont, kisses the hand of Celina Sotomayor, Sotomayor's mother, before the start of the second day of hearings. hide caption 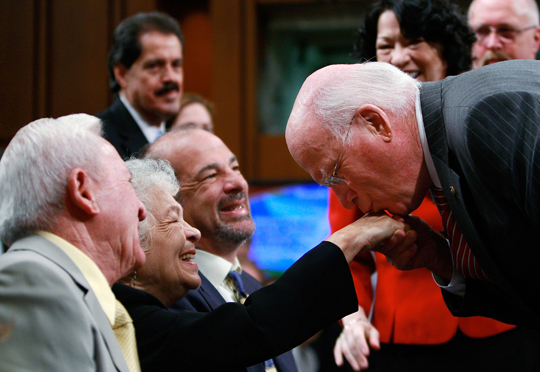 Senate Judiciary Committee Chairman Sen. Patrick Leahy, a Democrat from Vermont, kisses the hand of Celina Sotomayor, Sotomayor's mother, before the start of the second day of hearings.

Explore Coverage of Day 1 Of The Hearings

Judge Sonia Sotomayor told senators Tuesday that she disagreed with President Obama when he said that in a certain percentage of judicial decisions, "the critical ingredient is supplied by what is in the judge's heart."

Obama made those comments in 2005, at the confirmation hearings for Chief Justice John Roberts, whom Obama voted against.

When asked by Arizona Republican Sen. Jon Kyl whether she agreed with Obama's statement, Sotomayor said, "No, sir, I wouldn't approach the issue of judging the way the president does."

"I can only explain what I think judges should do," Sotomayor said, adding, "Judges can't rely on what's in their heart. ... It's not the heart that compels conclusions in cases, it's the law."

Kyl was one of several aggressive questioners on the Senate Judiciary Committee whom Sotomayor faced Tuesday. Many took issue with President Obama's statement that "empathy" was one of the qualities he wanted in a Supreme Court nominee. Sotomayor spent the second day of her Supreme Court confirmation hearings repeatedly emphasizing her impartiality as a judge.

Sotomayor's statements were so cautious that Republican Sen. Lindsey Graham of South Carolina at one point commented, "I listen to you today, I think I'm listening to [Chief Justice John] Roberts."

Sotomayor said judges must decide each case based on specific facts and law, rather than on personal, subjective considerations. She defended her record as free from personal or ethnic bias, and she affirmed the importance of Supreme Court precedent in cases ranging from abortion to gun rights.

As Tuesday morning began, judiciary committee Chairman Sen. Patrick Leahy, a Democrat from Vermont, asked Sotomayor a series of friendly questions about the appropriate role of a judge.

Sotomayor replied, "The process of judging is a process of keeping an open mind. It's the process of not coming to a decision with a prejudgment ever of an outcome." She told Leahy that judges must make "a decision that is limited to what the law says on the facts before the judge."

Her statement was a direct response to Republicans' concerns that Sotomayor will rely too much on empathy if confirmed to the nation's highest court. Ranking Republican Sen. Jeff Sessions of Alabama said those statements strike the right note, and "had you been saying that with clarity over the last decade or 15 years, we'd have a lot fewer problems today."

Sessions said he was troubled by "a body of thought over a period of years" suggesting Sotomayor believes that a judge's background will affect the result in cases.

The nominee rejected that characterization. "My record shows that at no point in time have I permitted my personal views or sympathies to influence the outcome of a case," she told Sessions. "In every case where I have identified a sympathy, I have articulated it and explained to the litigant why the law requires a different result."

Throughout the day, Sotomayor and her supporters have referenced her record as a judge, while her critics have returned to comments she has made off the bench.

The most controversial of those comments is the so-called "wise Latina" statement. "I would hope that a wise Latina woman, with the richness of her experiences, would more often than not reach a better conclusion than a white male who hasn't lived that life," Sotomayor told a law school audience at the University of California, Berkeley, in 2001. She has made similar comments elsewhere.

"The context of the words that I spoke have created a misunderstanding," she told senators on Tuesday, noting that the remarks had been made in front of groups of female lawyers and often, Latino lawyers or law students.

She added: "To give everyone assurances, I want to state upfront, unequivocally and without doubt, I do not believe that any ethnic, racial or gender group has an advantage in sound judging. I do believe that every person has equal opportunity to become a good and wise judge, regardless of their background or life experiences."

Sotomayor also addressed the most controversial case she has decided as a judge, Ricci v. DeStefano. Sotomayor was part of a three-judge panel on the court of appeals that ruled against white firefighters challenging a promotion test that the city of New Haven threw out after no black firefighters qualified for promotion.

The Supreme Court recently disagreed with Sotomayor and overturned the lower court ruling. Sotomayor told the committee that she "decided that case on the basis of a very thorough, 78-page decision by the district court and on the basis of established precedent" — not on her opinion of what the preferred outcome of the case should be.

Sotomayor's dialogue with senators also included exchanges on gun rights, presidential power and the Supreme Court's role in striking down acts of Congress.

The nominee's tone in the hearing was consistently slow and measured. She seemed to be striving not to create any drama, even as senators sometimes raised their voices.

Graham said that demeanor does not match some anonymous comments about Sotomayor's judicial temperament that have been submitted by lawyers to a legal Web site. Some of those comments described Sotomayor as "aggressive" and a "bully."

"Do you think you have a temperament problem?" asked Graham.

"No, sir," replied Sotomayor. "I believe that my reputation is such that I ask the hard questions, but I do it evenly for both sides."

Democrats were more full-throated in their defense of Sotomayor than the nominee was in defending herself. "This very reserved, very factual and very considered nominee is being characterized as being an activist when she is anything but," said California Democrat Sen. Dianne Feinstein.

Over the course of the day, Sotomayor faced a half-hour of questions from members of the Senate Judiciary Committee. Questioning continues Wednesday morning.

If she is confirmed, which Republicans frankly acknowledged seems nearly certain, the 55-year-old Sotomayor would be the first Hispanic and the third woman ever to serve on the Supreme Court. President Obama has tapped her to replace Justice David Souter, who often sided with the court's more liberal minority. Sotomayor is not expected to alter the ideological balance of the court in any significant way.