Accessibility links
Understanding Dementia And 'Wandering' People suffering from dementia display many common behavioral traits, and one of the hardest to manage and understand is wandering. Correspondent Linton Weeks talks about his recent report for NPR.org entitled "The Mysteries of Dementia-Driven Wandering."

People suffering from dementia display many common behavioral traits, and one of the hardest to manage and understand is wandering. Correspondent Linton Weeks talks about his recent report for NPR.org entitled "The Mysteries of Dementia-Driven Wandering." The condition can be confusing, frustrating and even fatal.

The Mysteries of Dementia-Driven Wandering 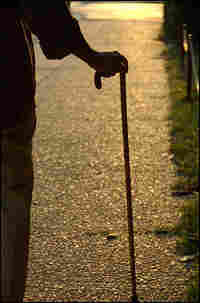 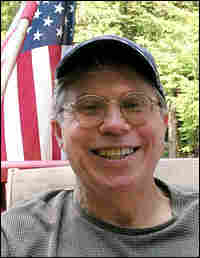 In May of 2008, Chuck Springer, 69 years old, walked out of his house in Belmont, Maine, one morning. He hasn't been seen since. Courtesy of the Springer family hide caption

The Internet abounds with organizations created to help you deal with Alzheimer's disease and its effects, such as wandering. Here are a few Web sites featured by the Alzheimer's Association:

Three brief stories of wanderers in Maine: all elderly, all in advanced stages of dementia. One lives, one dies, one mysteriously disappears.

A woman in her mid-70s, in South Portland, gets in her car and heads north. It's April 2009; snow still on the ground. She drives five hours or so and winds up in the deep woods near Moosehead Lake. She turns onto a logging road and continues until her car gets stuck in the mud. The next day she is found by snowmobilers. She is alive, wearing one boot. With the help of local authorities, she is taken back home.

In Auburn, schoolteacher Claire Young reads to her husband, William — who is 77 and a dementia-driven wanderer — about the woman at Moosehead Lake. William is not supposed to drive without Claire in the car, but he does. One later-in-April morning he starts driving northward. He is found six days later, also in the woods. He has died of exposure.

And in May of 2008, Chuck Springer — 69 years old — walks out of his house in Belmont one morning. He hasn't been seen since. His mother, Ellie Springer, says, "Chuck used to take walks by himself. He would walk two or three miles along the road, then come home." Occasionally, he strolled into the woods. A retired trucker, Springer also loved the world of long distance hauling. The family holds out hope that Chuck was picked up by another trucker. But more than a year later, the family doesn't know if Springer is one mile away, or a thousand. He is, after all, a wanderer.

The Desire To Wander

We are all wanderers, of course, to varying degrees. And it's no surprise that when our memories begin to slip, when our days fade, when our lives become broth-thin and we walk around as living ghosts of the vibrants we once were, we start looking for a way out, an exit. Dementia-driven wandering can seem random to others, but according to the National Hospice and Palliative Care Organization, it can be the result of boredom, curiosity or just a general desire to get up and go. Caregivers tell stories of patients wanting to go home, even when they are home.

"Wandering is a behavior that happens mainly as a result of declining cognitive skills," says Beth Kallmyer, director of family and information services at the Alzheimer's Association in Chicago. "The loss of memory impacts their ability to discern where they are."

Where they are in the physical world and who they are, in the metaphysical sense — for example, in their personal relationships.

We are fascinated by the pilgrim, the lost soul, the sovereign wayfarer. In others. In ourselves. The literature of wandering — Homer's Odysseus, Coleridge's Ancient Mariner, Steinbeck's Dust Bowl families, Star Trek's questing starships, for instance — fills shelves and shelves. "One wanders through life as if wandering through a field in the dark of night," writes Lemony Snicket.

For dementia-driven wanderers, the desire to ramble can be amplified. "It was like Bill was walking on a huge cliff," recalls Claire Young from her home in Auburn. "And the cliff was full of hay and grass and flowers. And he was happy and everything was wonderful and he was enjoying it. But the cliff was there. And I watched him go over the side into the abyss."

Dementia is the condition that describes diminishing cognitive skills. Alzheimer's — like Parkinson's and vascular disease — is a sickness that causes dementia.

Today, more than 5 million Americans suffer from Alzheimer's disease. That number is expected to grow to 20 million in the coming years, according to researchers at George Mason University. Though there is no way to be certain, the Alzheimer's Association estimates that some 60 percent of those with the disease will wander at some point.

Alzheimer's disease kills nerve cells, hampers connectivity between neurons and damages tissue in the brain, the association reports. Eventually, the brain begins to shrivel dramatically. The cortex, home of thinking, planning and memory, shrinks. So does the hippocampus, where new memories are created. Researchers are not exactly sure why Alzheimer's disease affects the brain the way it does. It could be the abnormal buildup — and entanglement — of proteins among nerve cells.

Scientists are also not sure why dementia often leads to roaming. But there is this sobering statistic from the Alzheimer's Association: About 50 percent of people who wander will suffer serious injury or death if they are not found within 24 hours.

Robert Koester (rhymes with chester) is the former president of the Virginia Search and Rescue Council and author of Lost Person Behavior: A Search and Rescue Guide on Where to Look — for Land, Air, and Water. One of Koester's specialties is people with dementia. With the mild cases, he says, dementia-driven wanderers are returning to what they did 15 or 20 years earlier. If they were farmers, they head for "the fields." If they were homemakers, they need to "pick up the kids."

In the moderate to severe cases, Koester says, the pattern is more random. Many patients seem to respond to circadian rhythms. At the end of the day and in the evening, there is the "sundowning" phenomenon, during which people exhibit all sorts of difficult behavior, Koester says, such as anger and stubbornness.

Occasionally, people will leave and not return — professionals call it "elopement" — and that can pose added dangers. Most people are found. It may be in a closet. Or at the end of a suburban street. Or in the mud, in thick woods, near a lake.

"Certainly," Koester says, "I find most people alive." And when he does, the people are usually nonchalant about the event. "Often there is no real acknowledgment that they have been out overnight."

Time flies when you're wandering.

Koester has another saying: "They go until they get stuck."

As families and health professionals have become more aware of dementia and its patterns — and lack of patterns — they have devised various methods of dealing with wanderers.

The Alzheimer's Association suggests making sure patients who begin to show signs of memory loss get exercise and keep their minds active. Certain drugs may slow the advance of the disease. There are practical steps to take, such as putting deadbolts on doors of homes and security devices in senior-living facilities and cutting back on the availability of liquids at night to keep patients from getting up to go to the bathroom. Certain organizations suggest dressing a wanderer in bright, reflective clothing and making sure the person is carrying identification.

The Alzheimer's Association has launched a MedicAlert + Safe Return program that coordinates with law enforcement when a person has wandered and provides assistance and medical-record access to wanderers and their families. For $50, with a $25 annual renewal fee, patients are given a medical bracelet to wear and are enrolled in the program at www.alz.org. Several states support Silver Alert, an emergency program to help find missing seniors.

The technology comes too late for Claire Young, whose husband, William, died in April.

She first noticed his symptoms a few years ago. Actually, he noticed them first. "I asked him to go to the post office at the bottom of the hill," she recalls. "He said, 'How do I get there?' "

William would turn to Claire, his wife of more than 30 years, while they watched TV and ask, "Who are you?"

He had good moments and bad. He could ace a memory test one day and completely flunk it the next.

Claire continued to teach school. Each morning she left William a detailed schedule: Do the dishes. Make the bed. Do your reading. Make your lunch. Etc.

Experts told her not to challenge William when he got confused, but she didn't listen. She made him work for answers, thinking it would help keep his brain sharp. He would ask: "Is it snowing outside?" She would say, "Raise the shade and look and tell me." He would ask: "What time is it?" And she would reply: "There's a clock in the kitchen. You tell me."

"For four years it was easy," she says. "As time went on he didn't want to leave the house."

At night "he had trouble sitting down," Claire says. "He would stand at the front window for hours. It was pitch black. He would just be looking outside, parting that curtain just a little bit. It was a form of wandering, but in the home."

When Claire says the word, it sounds like "wondering."

She tried to get William to walk with her, but he said it made him tired.

On that Monday in mid-April, however, William had plenty of energy to get in the car and motor over to Dunkin' Donuts. He didn't go inside as he usually did. Instead he used the drive-through window. He ordered his usual — a low-fat blueberry muffin and a cup of coffee. He stayed in the parking lot to finish his muffin. Then he started driving northward. And beyond.