Accessibility links
The Thrill of the Trill: Capturing an Insect Symphony Tuning out the chirps, peeps and trills that make up summer's insect orchestra is easy to do. But authors Lang Elliott and Wil Hershberger have captured each insect soloist — and their unique personality — in a new book that took six years to write.

Listen
The Thrill of the Trill: Capturing an Insect Symphony 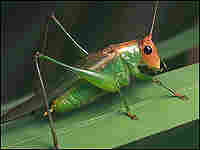 The red-headed meadow katydid is equal to many butterflies in flashiness. songsofinsects.com hide caption 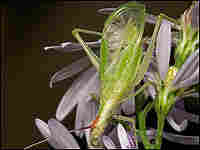 Named for its elegant, wide wings, the broad-winged tree cricket sounds off in fields from August through first frost. songsofinsects.com hide caption 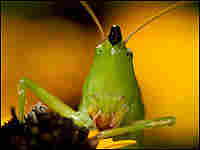 Sounds of some common insects of eastern and central North America:

Tuning out the chirps, peeps, and trills that make up summer's insect orchestra is easy to do.

But behind this musical melange is a world of distinctive insect personalities. For nature authors Lang Elliott and Wil Hershberger, capturing those personalities took six years and endless patience.

Their new book, Songs of Insects, brings 77 species of crickets, katydids, grasshoppers and cicadas to life. A companion CD invites you to listen in.

Armed with high-powered recording equipment and their own cameras, Elliott and Hershberger meticulously document insects native to eastern and central North America. Along the way, they discover species in places they never expected to... and map each insect's song on a sound spectrogram.

From the two-parted zee-dik! of the oblong-winged katydid to the "clear, silvery trill" of the Say's trig, each insect soloist takes its star turn on the CD.

Photographing their jumpy subjects in the field was a challenge. Elliott and Hershberger found that cooling the insects down would also calm them down. The problem was it would make them lethargic, too.

Eventually the authors discovered that handling insects inside would invariably make them more camera-friendly.

Elliott and Hershberger round out their guide with text that includes basic natural history information, identification tips, and discussions of conservation issues.

Nature Images and Sounds
The Songs of Insects