Accessibility links
What Will Follow Episcopalian Vote For Gay Clergy? Now that the conservative wing of the Episcopal Church has walked out and is creating its own rival church, liberals are left in the vast majority. With that shift, Episcopalians at the church's general convention in California on Tuesday voted overwhelmingly to allow gay men and women to become priests and bishops .

Listen
What Will Follow Episcopalian Vote For Gay Clergy? 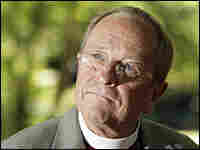 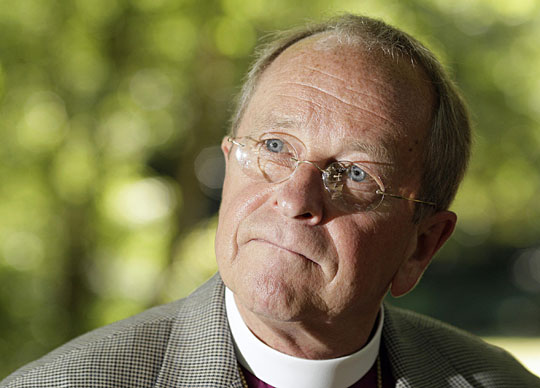 Bishop Gene Robinson was the first openly gay bishop in the Episcopal Church, sparking a rift within the Anglican community.

Just a few weeks ago, even liberals were predicting that the Episcopal Church would back away from allowing openly gay men and lesbians to become bishops. Ever since 2003, when the church elevated Gene Robinson to be bishop of New Hampshire, it's taken fire from conservative Anglicans around the world. Three years ago, leaders tried to tamp down the anger by promising a moratorium on consecrating gay bishops.

"And we did that for a time — for the last three years — and that time is over," says Susan Russell, a priest in Pasadena, Calif., and president of Integrity, a gay rights organization in the church. Russell was at the church's general convention in Anaheim, Calif., on Tuesday when it voted overwhelmingly to allow gay men and lesbians to become priests and bishops.

The vote raises the question: What has changed in the past three years to bring about the reversal? The conservative wing of the Episcopal Church walked out last month and is creating its own rival church, leaving liberals in the vast majority.

"Freedom's just another word for nothing left to lose," Russell says, quoting the Kris Kristofferson song. "And I think there's a tremendous sense of freedom and liberation in this church right now. The mission of this church will no longer be held hostage to those who are threatening to leave."

Russell acknowledges this was a risky move, particularly because Rowan Williams, the archbishop of Canterbury and leader of the worldwide Anglican Communion, warned the Americans not to endorse gay bishops or same-sex blessings lest the second-largest Christian church in the world be split in two. But Russell says the U.S. church is independent, and no foreign province can tell it what to do.

"There are those in the wider church who preferred we wouldn't put tea in the Boston Harbor, but that happened, too," she says.

But not everyone shares her defiant enthusiasm.

"I'm deeply concerned," says Edward Little, bishop of the diocese of Northern Indiana, "and particularly for the international ramifications."

Little, a conservative, says that officially endorsing homosexuality — when much of the Communion believes it's a biblical sin — is breaking faith with the church's fellow Anglicans. In fact, several African and Latin American provinces have severed ties with the U.S. church. Little says the Episcopal Church may find itself demoted.

"There's certainly the possibility that that fracture will deepen, and it could be that in some way, we'll find ourselves in a secondary place in the Anglican Communion," he says.

"It will accelerate individual departures, it will accelerate the number of parishes that decide to leave, and it may perhaps push another diocese or two over the edge," he says. "So I think it's going to increase the fragmentation."

Not so, says Russell.

"A church that is obsessed with fighting over whether or not gay and lesbian people can be bishops is not real attractive," she says. "I mean, 'Come watch us argue over gay people' is not a great marketing scheme. And I'm of the mind the decisions we're making are going to encourage church growth rather than decline."

Russell is anticipating the next hot potato on Wednesday, when church leaders are expected to take up blessings for same-sex unions.

While Janis Joplin recorded a much-played version of "Me and Bobby McGee," a song quoted in this story, the song was written and recorded by Kris Kristofferson.