Sotomayor Shies Away From Hot-Button Issues

Sotomayor Shies Away From Hot-Button Issues 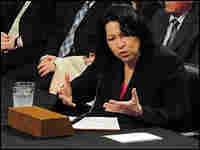 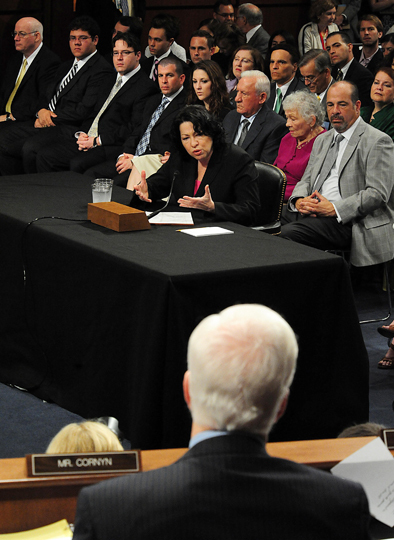 Get A Wrap-Up: Can't follow the proceedings live? Listen to NPR's one-hour wrap-up by clicking the link above now or come back later for a download. 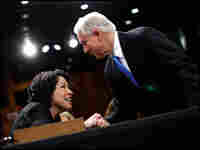 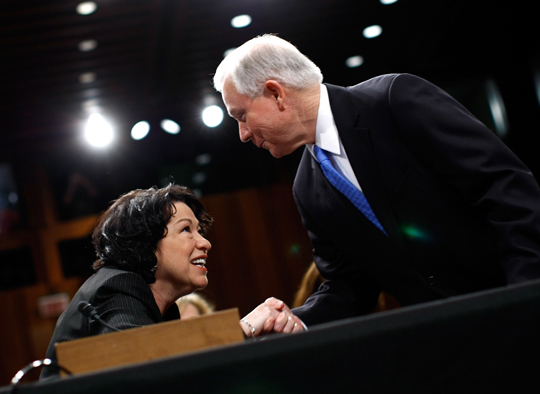 Despite vigorously questioning the Supreme Court nominee Tuesday, Sen. Jeff Sessions of Alabama, the ranking Republican on the Senate Judiciary Committee, gives Sotomayor a warm welcome at the beginning of hearings Wednesday.

• Sotomayor On Privacy And The Right To An Abortion

Until he switched to the Democratic Party in April, Specter was the ranking Republican on the Senate Judiciary Committee. He is also a former chairman.

Specter also addressed the controversy that has dominated the first three days of Sotomayor's confirmation hearings: her comments that a "wise Latina" judge might reach a better conclusion in some cases than a white male who hasn't lived that life. He dismissed his former party members' focus on the remarks as making "a mountain out of a molehill."

"The expectation would be that a woman would want to assert her competency in a country which denied women the right to vote for decades," he said.

Specter's admonition aside, ranking Republican Jeff Sessions of Alabama returned to the "wise Latina" issue Wednesday afternoon, as senators began a second round of questioning. "You seem to say in your speech that backgrounds can affect how you rule," Sessions said, as he once again asked Sotomayor to discuss her approach to objectivity on the bench.

'Two Pictures' Of The Judge?

Earlier Wednesday, Sotomayor told Republican Sen. John Cornyn of Texas, "It is clear from the attention that my words have gotten and the manner in which it has been understood from some people that my words failed."

Cornyn said it is difficult to reconcile "two pictures that I think have emerged during the course of this hearing." One picture, Cornyn said, is of a moderate judge who often agrees with her colleagues on the bench. The other picture, from Sotomayor's speeches and other writings, has given Republicans concern.

Still, Cornyn gave Sotomayor more reason to believe she will be confirmed, saying a filibuster "is not going to happen to you, if I have anything to say about it. You will get that up or down vote on the Senate floor."

Specter was one of several senators to question Sotomayor on her views on abortion rights — something she declined to discuss in detail, saying she would not discuss "abstract" potential cases.

Sotomayor confirmed that neither President Obama nor any other White House staff asked her position on abortion before nominating her to the high court. "I was asked no question by anyone, including the president, about my views on any specific legal issue," she said.

On Tuesday, she told senators that she believes the Supreme Court's two landmark decisions on abortion rights — Roe and 1992's Planned Parenthood of Southeastern Pennsylvania vs. Casey — are "settled precedent." Chief Justice John Roberts and Associate Justice Samuel Alito called those cases precedents deserving of respect during their confirmation hearings.

When Oklahoma Sen. Tom Coburn on Wednesday presented Sotomayor with a hypothetical scenario involving abortion rights, Sotmayor replied: "I can't answer your hypothetical, because I can't look at it as an abstract without knowing what state laws exist on this issue."

Though Specter is now a Democrat, he was vigorous in his questioning of the nominee.

He probed Sotomayor's views on the separation of powers. And he expressed frustration with her answer to his inquiry about why the Supreme Court declined to hear a case accusing the National Security Agency of illegally wiretapping Americans' communications with foreigners.

Sotomayor suggested that perhaps there was a "procedural bar" to the high court answering the legal questions raised by the case. "You've had weeks to mull that over, because I gave you notice," Specter said, clearly flustered, then added, "Well, I can tell you're not going to answer. Let me move on."

In response to questions about her views on other controversial social hot-button issues such as assisted suicide and gun rights, Sotomayor said she would follow court precedent.

Iowa Republican Sen. Chuck Grassley asked Sotomayor whether she agreed that it should be up to the states to decide on the legal status of gay marriage. She declined to answer, citing pending cases before the courts. Iowa is one of a handful of states that have legalized same-sex marriage.

Revisiting 'Ricci,' With Firefighters In Attendance

In an exchange with Cornyn, Sotomayor again tried to justify her decision in one of the most controversial cases she has heard in her 17 years as a judge — Ricci v. DeStefano. A three-judge panel that included Sotomayor ruled against a group of white firefighters who had sued the city of New Haven, Conn., for throwing out a promotions exam when no black firefighters qualified. The Supreme Court recently overturned that ruling.

Sotomayor said her panel evaluated the standard the city of New Haven used in deciding to throw out the exam. The city "made a choice under that existing law," the nominee said. "The Supreme Court, in its decision, set a new standard," she said.

As the nominee spoke, several New Haven firefighters sat in the audience of the hearing room.

The first three days of hearings have brought no dramatic fireworks. Sotomayor's demeanor was understated and slow. She rarely revealed more about her judicial philosophy than necessary. While Democrats frequently returned to the nominee's record as a judge, Republicans delved into her speeches and other comments off the bench.

The hearings continue Thursday, when the Senate panel is set to hear witnesses.