Accessibility links
Urban Panning: The 10 Meanest Cities In America? A just-released report from two groups that advocate for the homeless suggests the 10 most heartless cities in the country — and what they can do to be nicer.

A homeless man sleeps on the sidewalk next to a lot in downtown Los Angeles in March 2009. David McNew/Getty Images hide caption 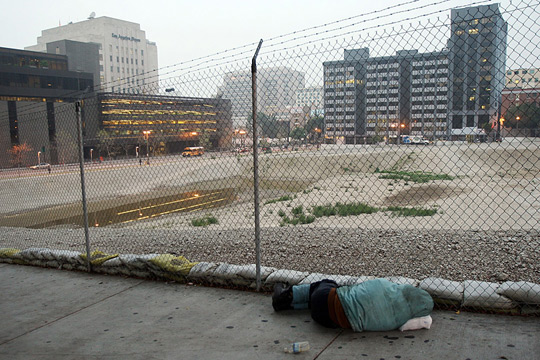 A homeless man sleeps on the sidewalk next to a lot in downtown Los Angeles in March 2009.

To some people, the Land of the Free doesn't always seem so free. And America the Beautiful doesn't look so pretty.

That's the viewpoint of two Washington-based groups — the National Law Center on Homelessness and Poverty, and the National Coalition for the Homeless — that have targeted the country's mingiest municipalities.

Without further ado, the groups' Top 10 Meanest U.S. Cities are:

The list is part of the organizations' "Homes Not Handcuffs" report. Released on Monday, the survey shows "an increase in the trend in cities around the country to criminalize homelessness," says NLCHP Executive Director Maria Foscarinis. Her group has been monitoring the issue since the early '90s.

The report, covering 224 cities, is an updated version of a 2006 study. In the past three years, according to the groups' findings, there has been a rise in laws that directly affect homeless people — including an 11 percent increase in anti-loitering laws and a 7 percent rise in regulations that ban camping in certain public spaces.

It's tempting to look at other, less serious ways cities might be ranked among the most mean. Largest number of quick-changing yellow traffic lights, for instance. Or least garbage pickups per month. A great city, Aristotle said a while back, is not to be confused with a populous one.

The meanest cities, Foscarinis says, are cracking down on people for "living in public places and for begging and eating and for seeking assistance in public places. Some cities are also punishing organizations and some people who are trying to help by offering food to poor people in public places."

In other words: Give us your tired, your poor, your huddled masses. Just make sure they don't huddle and mass in public places.

Is such a narrowed view fair? A city that is deficient in one category might be abundant in another. Take the case of Kalamazoo. Just last month This Old House magazine named a Kalamazoo neighborhood as one of the best places to buy an old house. (OK, irony alert.) And it was only last year that the city was showcased by the Wall Street Journal for its successful economic development ventures.

And what about Berkeley? "We are famous around the globe as a center for academic achievement, scientific exploration, free speech and the arts," the city's Web site says. "Berkeley is a constantly changing mix of longtime residents and new neighbors, and whether you just arrived from Albany or Azerbaijan, you are welcome here."

And San Francisco? Why is the lovely, open-minded City by the Bay on the list? "Because it's mean," says Bob Offer-Westort, civil rights organizer at the San Francisco office of the National Coalition for the Homeless. "There are a number of efforts to criminalize homeless people in the city that stem from City Hall.

"Over the past year and half, San Francisco has started spending money on prosecuting cases — such as sleeping in parks and sleeping on sidewalks — that specifically target homeless people."

He also points to the Community Justice Center, a newly funded court in the Tenderloin neighborhood designed to cut down on "quality of life" crimes such as panhandling and public indecencies. Many of the court's cases, The Associated Press reported, have involved sleeping outdoors, blocking public passageways and creating a public nuisance.

And who will speak up for the "meanest city" of all? Casey Hernandez, a spokeswoman for Los Angeles Mayor Antonio Villaraigosa, comes to her city's defense. The report, Hernandez says, "fails to detail the city's housing-first strategy, which reflects national best practices for housing and services that help homeless individuals stay off the streets."

"The assertion that Los Angeles criminalizes homelessness," she says, "is simply false. ... Since 2007, Mayor Villaraigosa has dedicated $100 million annually to housing for the homeless."

Since taking office, Hernandez says, "the mayor has committed city funds to more than 1,078 permanent supportive housing units, creating more units to serve the homeless and those at risk of homelessness than in the previous 12 years combined."

In addition to permanent supportive housing, Hernandez adds, Los Angeles has worked to reduce crime in areas with high homeless populations. Hernandez credits the city's Safer City Initiative with helping reduce serious crime by more than 35 percent. "The city's first priority is to protect our most vulnerable residents from violent crime. The city dedicated an additional 50 officers to Skid Row to protect its residents and remove a significant criminal element that historically hinders efforts to provide services to the homeless."

The skid row initiative is specifically cited in the meanest cities report. According to a 2007 study by UCLA, the $6 million that the city was spending on the Safer City Initiative was more than the $5.7 million it was spending for homeless services. "Advocates found that during an 11-month period, 24 people were arrested 201 times, with an estimated cost of $3.6 million for use of police, the jail system, prosecutors, public defenders and the courts. Advocates asserted that the money could have instead provided supportive housing for 225 people," the report states.

To make the mean streets less so, Maria Foscarinis urges cities across the country to take more constructive approaches: providing housing, jobs and social services. In the end, she says, "that's more cost effective than deploying more police and spending more money on prisons and jails."