Accessibility links
U.S. Military Holds Iraqi Journalist Without Charge American forces arrested Iraqi cameraman Ibrahim Jassam last year and continue to hold him, without charge, in a U.S. military prison camp — even as the United States transfers jurisdiction to Iraqi authorities. The U.S. says he is a "high-security threat," but offers no evidence. 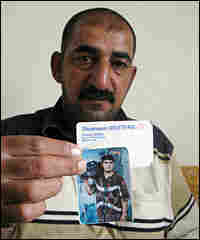 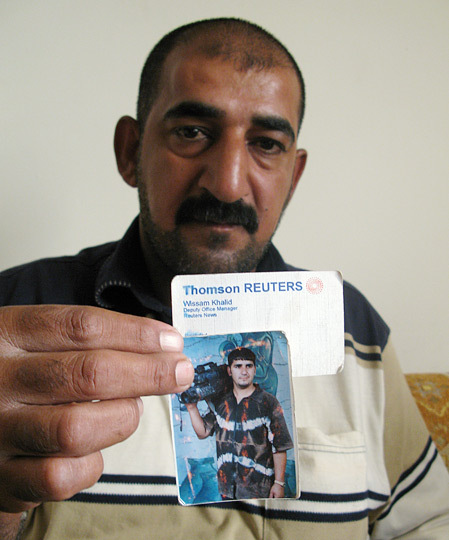 American forces arrested Iraqi journalist Ibrahim Jassam last year and continue to hold him without charge in a U.S. military prison camp — even as the United States transfers jurisdiction to Iraqi authorities.

Jassam, a cameraman, shot footage of Iraq's violence during times when it was impossible for Western reporters to move safely around Iraq.

He was 29 years old in 2006 when he began working for Reuters news agency. At the time, the towns southwest of Baghdad had earned the nickname the "Triangle of Death" because of the violence between Shiite militias and Sunni insurgents. His brother, Walid, says Jassam took his work very seriously.

"When there was an explosion, Ibrahim was always the first one to be in the location filming. He felt that whatever was happening on the ground he wanted it to be seen on the television," Walid says.

But as with many cases in the past, the U.S. military apparently thought Jassam's photos looked a little too close to the action, suggesting a connection to insurgents. One morning in September 2008, hours before dawn, a combined U.S. and Iraqi force cordoned off Jassam's neighborhood. They broke down the door of the house where he lived with his parents and siblings, handcuffed Jassam and dragged him away in his underwear.

The military brought dogs inside the house, says Jassam's sister, Eman. She says she tried to tell the soldiers her brother had done nothing wrong.

"One of the Iraqi soldiers said, 'Why you are still talking? If you only knew what we are going to do your brother, you would be crying.' These words [are] still echoing in my ears," she says.

Months passed before the family got word that Jassam was in a U.S. military prison. Eventually, they visited him. But they are still waiting for any sort of criminal charge to be made against him.

Capt. Brad Kimberly, a U.S. military spokesman, says Jassam is still in detention because he is classified as a "high-security threat."

Under a new U.S.-Iraqi security agreement this year, any arrest carried out by American forces requires an Iraqi warrant. But since Jassam was arrested last year, no warrant was needed. Kimberly says the American military's only obligation under the previous security agreement is to transfer or release him sometime after December. But Kimberly offers no evidence.

"Prior to the first of January, all detainees were held as wartime security threats. No legal charges were assigned," he says.

No Evidence, No Confession

An Iraqi court document from November 2008 says that since the Americans provided no evidence or confession, Jassam should be released. Michael Christie, Reuters bureau chief in Baghdad, says arrests like this have been a problem throughout the war, especially for video journalists.

"Images of war, of American military vehicles which are taken as enemy propaganda — this is perfectly innocent journalistic work, which if you're looking at from a U.S. military perspective might suddenly be malevolent," he says.

Reuters has raised Jassam's case in Baghdad and Washington. Christie says Jassam did a good job in a dangerous city.

"We have to assume that he was detained for the work that he was doing as a journalist. Until we see otherwise, until the evidence is declassified, he deserves the presumption of innocence," Christie says.

Detention, Wait For Charges Go On

Iraqi journalists have been regularly detained by U.S. forces through the course of the American occupation; several have been killed when mistaken for insurgents. According to Mohamed Abdel Dayem, of the New York-based Committee to Protect Journalists, Jassam is the only one still in U.S. custody.

"No charges have been brought against any of the journalists ... If and when they are detained, [journalists'] cases should be reviewed in a quick and timely way, and they should either be charged with a recognizable crime or they should be released," Dayem says.

After a few months in a prison near Baghdad, Jassam was transferred to Camp Bucca, a massive U.S. prison camp near the border with Kuwait. The camp is roughly an 8-hour drive south from his home, but the family was able to visit him last month.

Jassam's sister says he isn't eating enough and looks thin. She says her brother knows that the Iraqi court cleared him in November, and that he can't understand why the Americans keep holding him, for 10 months now and counting.