Accessibility links
Skeletons Of The Auto Industry Linger Across U.S. In all, 21 Chrysler and General Motors plants will be closed permanently or idled over the next few years. In addition to the loss of thousands of jobs, the closures can mean a substantial drop in tax revenue for affected communities. Some cities converted the vacant auto plants into other businesses in an attempt to reinvent their economies. 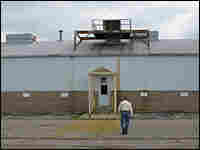 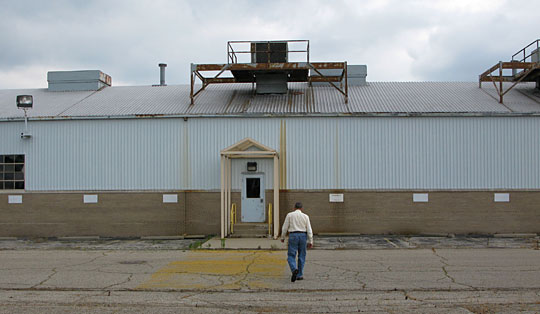 Gary McKinney, a city official for Anderson, Ind., walks toward an abandoned GM plant. McKinney oversees the redevelopment and cleanup of industrial property. 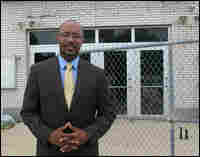 James Dixon, a local minister, encouraged the VGB Group to visit Anderson, Ind. The Chinese company, which makes an alternative to Styrofoam products, is currently in negotiations with the city to buy a GM plant. Cheryl Corley/NPR hide caption 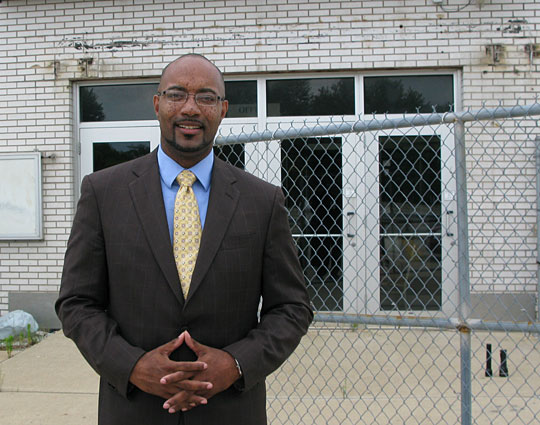 James Dixon, a local minister, encouraged the VGB Group to visit Anderson, Ind. The Chinese company, which makes an alternative to Styrofoam products, is currently in negotiations with the city to buy a GM plant.

In all, 21 Chrysler and General Motors plants will be closed or idled over the next few years as the U.S. auto industry downsizes as part of a massive restructuring.

For communities in the Midwest and other affected regions, the closures mean the loss of thousands of jobs and a substantial drop in tax revenue. What cities get in return, initially, is a massive vacant auto plant on a lot that can span multiple acres.

One of the first cities that may be looking for a little help is Fenton, Mo., just outside St. Louis. Workers there built the Dodge Ram pickup until Chrysler shut down the plant last week.

Chrysler had already closed its Dodge minivan plant in Fenton late last year. Mayor Dennis Hancock says the city has worked to diversify its economy to prepare for the financial hit of auto plant closures, but it's still a psychological blow.

"When I drive by those plants today, it's almost eerie to see the empty parking lots that either used to be full of vehicles that belonged either to the employees or that were produced there," Hancock says. "Now it's just an empty sea of asphalt."

Cities in a quandary over how to recycle auto plants and the industrial land around them may look to Anderson, Ind., as an example. It was once home to about 20 GM plants.

Anderson Mayor Kris Ockomon says it was a huge hit when plants started shutting down in the city of 60,000. Anderson, located 20 miles northeast of Indianapolis, used to be the land of autoworkers. GM once employed more than 25,000 people in the city. Times were good for Anderson, but the auto industry heyday started to fade as early as the late 1970s.

Clearing The Path For New Development

Part of Anderson's survival came from getting rid of a number of its old GM plants. Linda Dawson, the city's director of economic development, says more than a dozen factories were torn down and the land was cleaned up for new development.

"Communities struggle with that concept because it also reduces the tax base, but most of these plants that were built in the '40s and '50s do not meet modern standards and there's no value in them," she says. "[There is] no market to them."

Several of Anderson's former GM plants were sold, however, and are now occupied by other companies. In some of the larger buildings, tenants share dock space, forklifts and sections of the facility. With the sale of another GM property, Anderson city officials were also able to obtain federal and state funds to help startup businesses.

DeWayne Landwehr, the director of Anderson's Flagship Enterprise Center, says there has been a spinoff of more than 50 companies, including the Bright Automotive Group, which is producing a hybrid delivery van that gets 100 miles per gallon. Even so, Landwehr says the center is not focusing on the automotive industry but on smaller businesses so one failure doesn't devastate the entire community.

The Emergence Of A Diversified Economy

Anderson's largest employer now is the city's hospitals. And two years ago, food processor Nestle built a massive plant in Anderson. Even though the city has a diversified economy, signs of the auto industry devastation linger.

Two vacant GM plants remain part of the city's landscape. Plant 16 is an older facility that hasn't been used for years. At least three companies are interested in GM's former Plant 20. It's newer and has high ceilings, vast floor space, a number of docking bays and air conditioning.

Anderson is in serious negotiations with Variety Global Business Group, a Chinese firm looking for a manufacturing plant for its Starchware product — an environmentally friendly alternative to Styrofoam.

Anderson may still have more to do to recover from years of automotive dependency, but business and government leaders say they've created a good blueprint for communities faced with recycling old auto plants and huge tracts of vacant industrial land.