Accessibility links
California Ballot Measure Targets Illegal Immigrants As California grapples with the mounting toll of a $26 billion budget deficit, some people are calling for a ballot initiative that would cut off all public benefits for illegal immigrants. 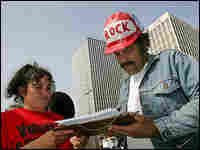 Proposition 187, a 1994 ballot initiative, sought to deny social, educational and health services to immigrants who were in California illegally. It was ultimately overturned, but it inspired activists to increase voter registration. David McNew/Getty Images hide caption 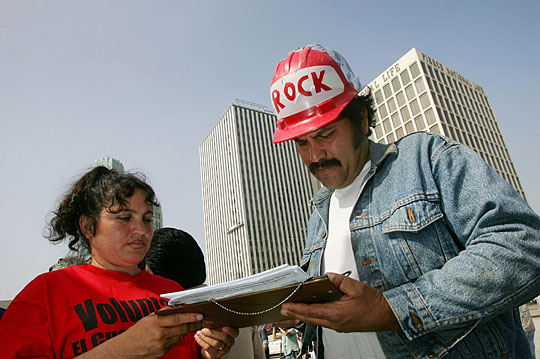 Proposition 187, a 1994 ballot initiative, sought to deny social, educational and health services to immigrants who were in California illegally. It was ultimately overturned, but it inspired activists to increase voter registration. 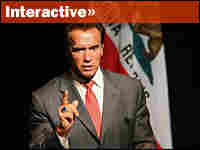 California In Crisis: On The Verge Of A Cash Collapse

As California wrestles with its worst economy since the Great Depression, illegal immigrants are becoming part of the debate. It's not unlike what happened the last time the state was having money problems.

Outside the Home Depot in Los Angeles' Pico Union neighborhood, a group of day laborers wait for construction and gardening jobs. Among them is 40-year-old Justo. He came to California from Guatemala 13 years ago.

The government is always accusing immigrants of draining money, he says, adding "they look to us as scapegoats." There's not much work these days for men like him. He scrapes by on a part-time job as a security guard downtown. Justo says he got hired using a phony Social Security card number.

Like nearly 60 percent of all undocumented immigrants in the country, Justo doesn't have health insurance, so he relies on the county hospital emergency room. His young children were born in California and are U.S. citizens. They go to public school in Los Angeles.

"It is catastrophic," Antonovich says. "We cannot be the HMO to the world."

One of the greatest burdens in L.A. County, he says, is welfare for children whose parents are undocumented.

As the state tries to dig its way out from under a massive deficit, some say cutting off benefits to undocumented immigrants should be part of the solution. One proposal would stop welfare payments even to the U.S.-born children of illegal immigrants.

It echoes California's last big financial crisis in 1994. That's when 59 percent of California voters passed Proposition 187, a ballot measure that outlawed education, health care and social services to illegal immigrants and their children.

Many Californians still remember the powerful TV commercial with pictures of frightened immigrant families running across freeways after illegally crossing the border.

"Three-hundred thousand illegal immigrant children in public schools, and they keep coming. The cost: $1.5 billion a year," the announcer says.

Even though Proposition 187 passed, the measure was declared unconstitutional in federal court and was never enforced. Since then, several other states have crafted similar measures that have passed legal muster.

"It's clear in the aftermath of Prop 187, our ability to balance the state budget by reducing that $4.6 billion is limited. It's probably more realistic to expect savings to the state in the hundreds of millions, in the short term, not in billions," Carson says.

Weighing the costs versus the benefits of unauthorized immigrants is tricky, says Jeff Passel, a researcher with the Pew Hispanic Center. They don't get paid much, and many don't report their earnings — but they still end up contributing billions of dollars to the state's economy. Regardless of their impact, the sheer number of undocumented immigrants in California is huge — around 2.7 million by Passel's estimate.

"California has had the largest number of undocumented immigrants in the country for at least 25 years, and during those years, the state's had budget difficulties but also ran huge budget surpluses," Passel says.

Back in Pico Union, Justo, the day laborer, wonders how California has gone from boom to bust so quickly.

"California was very, very rich. My question is who take this money? The illegal, the immigrants? I don't think so," he says.