Accessibility links
Officials Scramble To Prep Swine Flu Vaccine By Fall For the first time ever, U.S. health officials will vaccinate Americans against two flu strains in one season. They're aiming to have an H1N1 vaccine ready by the fall, but slow growth of the vaccine strain means there likely won't be enough for everyone until December. 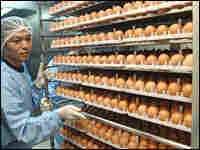 Researchers sort through eggs used for the cultivation of swine flu vaccine June 18 in a plant in Taichung. Taiwan is set to mass-produce swine flu vaccine in October. Patrick Lin/AFP/Getty Images hide caption 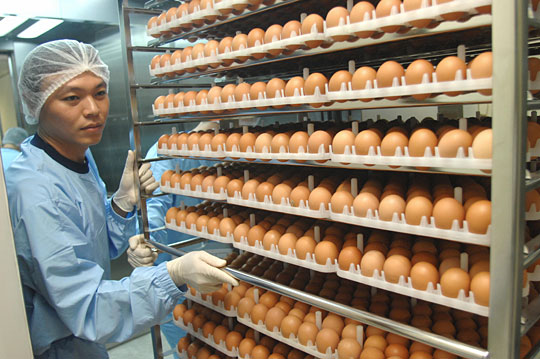 It's never been done before — vaccinating Americans against two different flu threats in one season.

But that's what public health officials all over the country are beginning to plan for. They need to deploy two different flu vaccines that will be available on different schedules — and targeted at different people.

"This will be a complicated fall," says Barbara Ferrer, executive director of the Boston Public Health Commission.

Ferrer says the new H1N1 swine flu virus — officially declared pandemic on June 13 — may well come back to the Northern Hemisphere early this fall, before public health officials have a vaccine against it.

When it first hit in the spring, the new flu shut down hundreds of schools across the country. Ferrer says it sickened about one in every 10 Boston schoolchildren.

"If it's anything like we saw in the spring, school-age children will remain very vulnerable to [the new] H1N1 infections," Ferrer says, "and we'll not have a vaccine that we'll be rolling out early on in the season to protect them from that strain of influenza."

Instead, health officials will have to persuade people to get vaccinated against a different flu — regular seasonal flu — even though it's not the cause of the illness that people may see all around them.

Preparing For Pandemic And Seasonal Flu

Health officials expect seasonal flu strains will circulate this fall and winter along with the new pandemic strain. That's what is happening now in the Southern Hemisphere's flu season, which occurs during the northern summer months.

Officials say the nation can't afford to leave people unprotected against seasonal flu, which typically causes 200,000 hospitalizations and more than 30,000 deaths each year.

But if the new H1N1 strain causes sickness earlier than seasonal flu, as health officials expect, Ferrer thinks it'll be hard to convince people to get a shot against seasonal flu beginning in October — because seasonal strains probably won't be circulating yet.

In other words, there will probably be a mismatch between which vaccine is available and what viruses are actually going around.

Ferrer is not the only one who thinks this will be complicated.

"Doing these two things simultaneously is unprecedented," says Dr. Bruce Gellin, director of the National Vaccine Program Office in the Department of Health and Human Services. "Trying to keep track of both and not be distracted by either is our challenge."

The H1N1 swine flu virus being used to make the vaccine isn't growing as fast as expected.

Flu vaccines are made by growing a specially prepared vaccine strain in eggs. And the seed strain the government shipped to vaccine manufacturers on May 21 isn't multiplying as fast as it should when it's injected into eggs.

"Manufacturers have been comparing [this growth in eggs] to the growth of the seasonal H1N1 virus," Gellin says. "And compared to that, many of the manufacturers have reported that it's not growing as well — maybe about half as well, maybe a little bit better than that."

That's optimistic, says Doris Bucher of New York Medical College. Her lab created the pandemic virus seed strain. She says a 50 percent yield, compared to seasonal H1N1, is actually "the upper end. Some are getting only 25 percent growth."

When it left her lab, the virus was growing well, Bucher says. And usually, yields increase when manufacturers begin growing up the virus in successive batches of eggs. It's definitely unusual for yields to go down.

Testing is under way to create a better-growing seed strain. Meanwhile, Bucher says, manufacturers are tweaking their processes to increase the yield.

"They have a whole list of things to try," Bucher says. "They vary temperature, time of incubation. Do you put in 10,000 infectious particles per egg or 100,000? But unfortunately, to date it hasn't been working."

The implications are big. Unless manufacturers can get a faster-growing seed strain, the vaccine against the pandemic H1N1 virus will be made and delivered more slowly.

Trying To Speed Up Vaccine Development

To compensate for lower yields, officials hope they can add an immune-boosting ingredient called an adjuvant. That could reduce the amount of viral protein needed in each dose and stretch the 200 million doses the U.S. government has ordered. (Because most people will need two shots, 200 million doses would cover about 100 million people, without a dose-stretching adjuvant.)

The problem is that no U.S. flu vaccine has ever included an adjuvant. And in Europe, experience with adjuvant-containing flu vaccines has been limited to vaccines for the elderly, while the target for pandemic H1N1 vaccine will largely be children and younger adults.

There are safety concerns about using the adjuvant that might delay Food and Drug Administration approval.

These issues aside, Gellin says the first doses of pandemic vaccine should be available sometime in October, with the bulk of the order fulfilled sometime in December.

Meanwhile, health officials have to do what they can to see if the new vaccine is safe and effective.

About 10,000 volunteers are lined up to test the new vaccine. Those studies will begin over the next several weeks. They'll determine how effective the vaccine is at raising an immune response — that is, antibodies against the flu.

But Gellin says they won't reveal any serious but rare side effects.

"With rare events, you may not be able to see them until you've had a significant number of people who've received a vaccine," he says.

In 1976, a paralyzing disease called Guillain-Barre syndrome struck more than 500 people who had been vaccinated against a different swine flu. The crash campaign halted after 40 million Americans had been immunized.

This time, a World Health Organization official says, the chances of a Guillain-Barre repeat should be smaller because today's vaccines are more purified. "But to be honest, it is only when you have large-scale use that you know the safety profile," says Dr. Marie-Paule Kieny, director of the WHO Initiative for Vaccine Research.

Officials will be looking hard for any side effects that might crop up. They're hoping for no surprises — even as they prepare for them.

"Particularly with influenza, we've learned to expect surprises," Gellin says. "We're ready for surprises, and have to be able to look for them, acknowledge them and figure out how best to deal with them."

The Centers For Disease Control And Prevention On H1N1