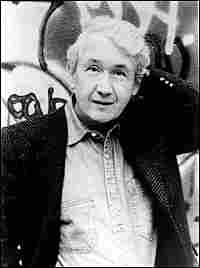 Born in Brooklyn, Frank McCourt accompanied his parents to Limerick, Ireland, at the age of 4 where they lived in utter poverty. These early experiences informed his prize-winning memoir Angela's Ashes, which later became a feature film. AFP/Getty Images hide caption

Born in Brooklyn, Frank McCourt accompanied his parents to Limerick, Ireland, at the age of 4 where they lived in utter poverty. These early experiences informed his prize-winning memoir Angela's Ashes, which later became a feature film.

Frank McCourt, the Irish-American writer who turned a grim childhood in Ireland into a best-selling memoir, has died. He was 78.

McCourt had been gravely ill with meningitis and was being treated for skin cancer. Malachy McCourt, also a writer, said his brother died Sunday afternoon at a New York hospice.

McCourt was a retired schoolteacher in his 60s when his first book, Angela's Ashes, became a huge best-seller. It won the Pulitzer Prize.

The book detailed McCourt's bleak upbringing in an alcoholic household in Limerick, Ireland. When it was first published, The New York Times review noted that "there was not a trace of bitterness or resentment in it," but McCourt told interviewers that he had to learn to overcome his anger before he could write the book.

He also had to learn to believe that his story was worth telling. During an interview with NPR in 1999, McCourt said that it wasn't until he moved to this country and started reading the work of Sean O'Casey that he understood that he could write about his own life.

"O'Casey was writing about people in the streets and his mother and dying babies and poverty. So that astounded me because I thought you could only write about English matters," he said.

While he was writing Angela's Ashes, McCourt used to hang out at a bar in Greenwich Village called the Lion's Head, and it was there that he became friends with the writer Mary Brested. He asked her to read an early draft of the manuscript.

Brested says she was stunned by the book's restrained tragedy and transcendent humor:

"I stayed up late — I had young children then, and I was a tired mother — and I did not stop reading it until I was done, and my husband was annoyed because I was laughing and making noise in the bed next to him," she remembers. "I mean, I just thought it was the best work on growing up in Ireland that I had read since James Joyce in Portrait of the Artist."

Brested helped McCourt find an agent, and the book was published in 1996, when McCourt was 66 years old.

Angela's Ashes was wildly popular, staying atop the best-seller lists for two years and earning McCourt numerous awards, including the 1997 Pulitzer. Throughout it all, Brested says McCourt handled his newfound fame remarkably well.

"He's handled it better than anyone I've ever known. He didn't turn into a jerk who was famous, he didn't leave his wife, he didn't forget his old friends," she says. "He was supremely happy, but he kept a kind of grounded sort of somber sense of the realities of life."

McCourt's second memoir, 'Tis, took up the story of his life when he moved to the country at the age of 19. His third book, Teacher Man was the story of his years as a teacher in the New York City school system.

With all his success, McCourt didn't give up teaching entirely. For the last 10 years, he taught a workshop in memoir writing at Stony Brook Southampton College. Robert Reeves, the director of the school's master of fine arts program in writing says that McCourt's classes always filled up immediately.

"He was an enormously popular teacher. Reliably, his workshops would be oversubscribed," says Reeves. "When we opened admissions in the first mail there would be 20 applications, all for Frank."

Reeves says McCourt brought the same sense of humor and charm to his teaching that was so evident in his writing. He liked to laugh at himself and he enjoyed life, in spite of — or perhaps because of — the tough pitches life had thrown his way.

"Frank's serenity may have come from the fact he's surrounded by and had lived through so much that would be upsetting to serenity," says Reeves. "There was a willful calm and happiness. I think people can decide to be happy. Maybe that was it."