Accessibility links
Bridge Still Home For Miami Sex Offenders A colony of sex offenders living under a Miami bridge has been steadily growing since state corrections officers began ordering offenders there a few years ago. Now, state judges are being asked to mediate a dispute over the encampment. 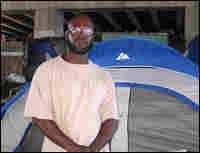 Homer Barclay is one of more than 80 sex offenders now living under the bridge on the Miami causeway. Greg Allen/NPR hide caption 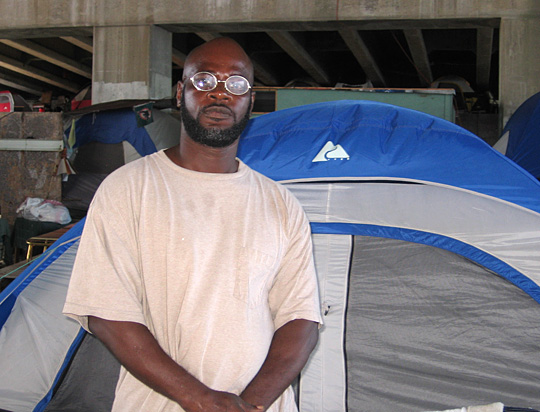 Homer Barclay is one of more than 80 sex offenders now living under the bridge on the Miami causeway. 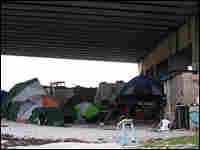 What started as a few tents under the bridge has now grown into a village of shacks, tents, campers and cars. Greg Allen/NPR hide caption 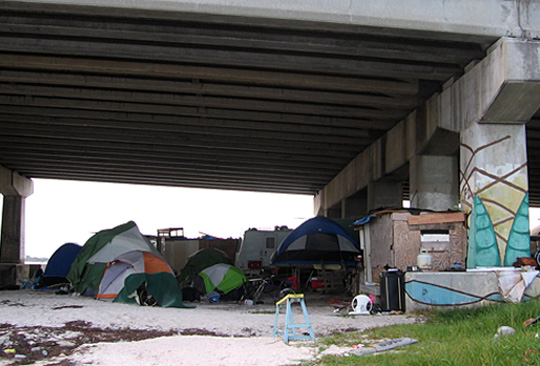 What started as a few tents under the bridge has now grown into a village of shacks, tents, campers and cars.

More About The Encampment

State judges in Miami are being asked to mediate a dispute that involves the city, the state and a growing colony of sex offenders.

The colony is an encampment of tents and shacks under a Miami bridge that began when corrections officers began ordering offenders there a few years ago. The shantytown was created in response to local laws that restrict where sex offenders can live.

Now, local and state officials are trading charges about who's to blame for creating the situation and who should fix it.

It started more than two years ago — a few tents pitched under a bridge on Miami's Julia Tuttle Causeway. Today, it's a well-established shantytown. More than 80 people make their home under the bridge.

There are half a dozen wooden shacks, some with cooking and toilet facilities. It's a village of tents, campers and cars — also a dock with a few small rowboats. Shared generators provide power for a CD player — also to recharge cell phones and electronic monitoring units required for sex offenders on supervised release.

Homer Barclay came to live here a year and a half ago. Barclay was convicted of attempted sexual battery in 1992. Last year, after a parole violation, he says probation officers gave him just one option.

Barclay has a driver's license issued to him at the time of his release. His address is listed as Julia Tuttle Causeway.

Like many of the sex offenders on supervised release, Barclay is required to be here between 6 p.m. and 7 a.m. During the day, many of the felons leave for jobs or to visit their families.

On this day, Barclay was fishing.

"I'm not working because it's difficult to find a job. I went everywhere looking for a job. Woo, it's rough," Barclay says. "Right now, I'm hungry, you know what I'm saying? I need a bath. I'm fishing, as you see, to try to survive. We just want to do what they want us to do. We just want our life back. That's all we want."

Miami is one of several communities in South Florida that, along with Miami-Dade County, adopted ordinances banning sex offenders from living within 2,500 feet of schools, parks, bus stops and anywhere that children congregate.

State corrections officials say that made it impossible for many sex offenders to go back home because their old residences were within the restricted area. Even homeless shelters are off-limits. Corrections officials settled on the state-owned land under the bridge as their only recourse.

Until recently, the sex offender colony was mostly out of sight to motorists passing overhead on the interstate that links Miami Beach to the mainland. But the growing population has now spread out from under the bridge to the grassy areas alongside the road.

"This is probably not the message the city of Miami and, I suspect, certainly Miami Beach [wants] to send to its visitors that, 'Welcome to our neighborhood. We put all our predators right out here,' " Sarnoff said.

In a letter to the city of Miami last month, a state lawyer said the corrections department is just following local laws and that the growing colony of sex offenders is, in effect, Miami's problem.

Sarnoff says he and others want the state to convene a task force to look for a solution to the problem. So far, they've seen no results.

Out of frustration, Miami sued the state of Florida saying it had created a public nuisance that was a threat to health and safety. The city also maintains that the shantytown on the causeway violates the sex offender ordinance because it's within 2,500 feet of an island in Biscayne Bay that's designated as a city park.

While she says the corrections department shares the concerns about the growing population under the bridge, Plessinger says she doesn't believe the nearby island presents them with a legal problem requiring them to relocate the sex offenders.

"It's my belief that that is just a barrier island that occasionally boaters will go to to picnic," she says. "There's no playground equipment. It's not someplace where we would consider children to be congregating."

Recently, the ACLU also entered the melee with a lawsuit that targets Miami-Dade County and its 2,500-foot residency restriction.

Maria Kayanan of the ACLU says Miami-Dade's law should be pre-empted by a state ordinance that sets a 1,000-foot residency restriction on sex offenders. That would expand greatly the places in Miami where they could live. It would also create a single, statewide standard.

"There seems to be a growing recognition, not just in South Florida but throughout the state and across the country, that state legislative schemes are the better way to go rather than a patchwork of local ordinances," Kayanan says.

All parties seem to agree that there should be a single statewide residency standard for sex offenders, but the question is how to get there. With state and local officials at an impasse, the future of the growing colony of sex offenders living under the bridge would now appear to rest with Florida's courts.